There are countless colors, hues and shades that paint the landscape that stretches as far as the eye can see. It has been shaped by wind and water, and holds clues to the past. The Petrified Forest is one of the best places in the world to see the fossil record from the Late Triassic Period. The remnants of prehistoric forests, now petrified wood; plant and animal fossils; and artifacts have told us much about this beautiful, wild land. 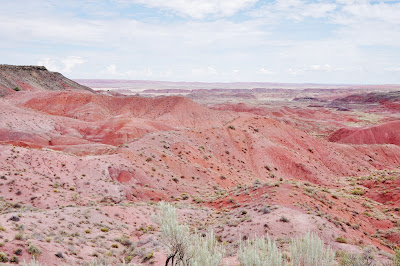 The Chinle Formation is characterized by colorful bands of sedimentary rock. This formation was deposited between 227 and 205 million years ago by a northwest flowing river system. Based on rock type, it is divided into five members: Mesa Redondo, Blue Mesa, Sonsela, Petrified Forest, and Owl Rock. These members reveal a transition from moist to arid environments. 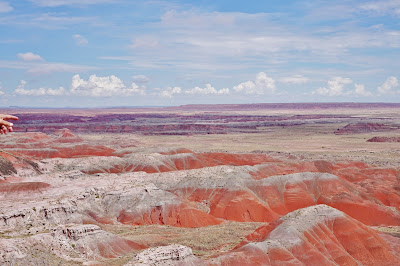 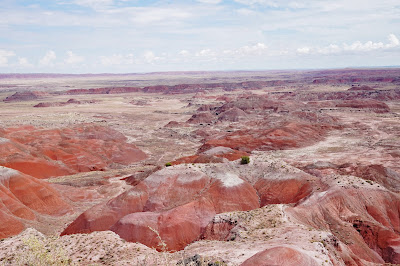 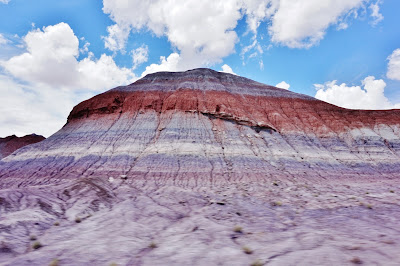 Petrified Wood are like precious gems shining in the sun, colorful specimens from small shards to massive trunks, are strewn across the landscape. In some areas of the park, fossilized trunks are visible. In other areas they remain hidden, still buried under layers of soil and rock. As the trees died or were knocked down by wind or water, many were carried down-stream and buried by layers of sediment. The logs soaked up groundwater and silica from volcanic ash and over time crystallized into quartz. Different minerals created the rainbow of colors seen in many pieces.

Ancient Arizona - it's hot, humid, lush, green. This desert grassland used to be a rain forest. During the Triassic Period, 225 million years ago, this area was a tropical landscape with abundant vegetation - ferns, horsetails, and cycads. Early dinosaurs and reptiles roamed; fish, clams, snails, and crayfish moved through rivers; and giant, 180-foot conifers reached to the skies.

Over the past 200 million years continents moved, regions uplifted, climate changed, and the river system, along with its plants and animals, was buried by layers of sediment.  Wind and water have continually molded, sculpted, and peeled back these layers, giving us a glimpse of the once tropical land we know today as Arizona. 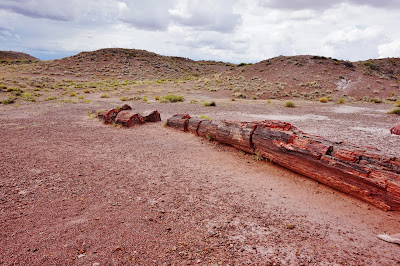 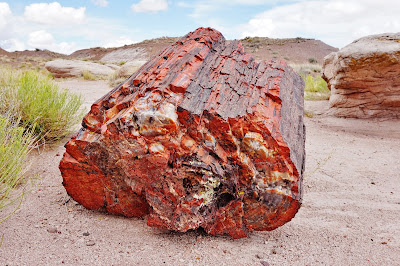 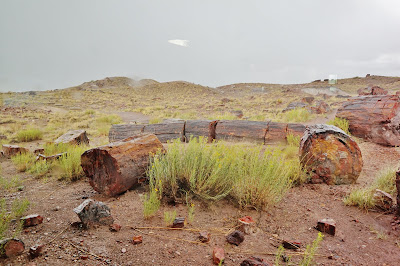 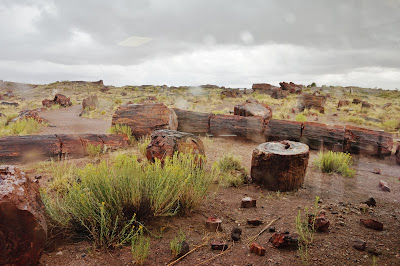 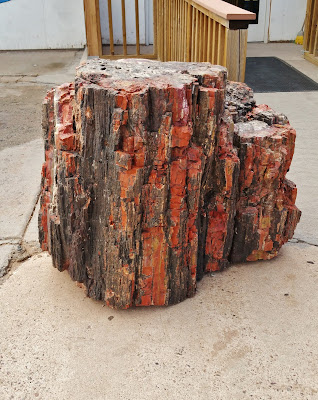 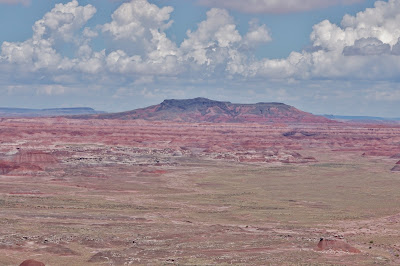 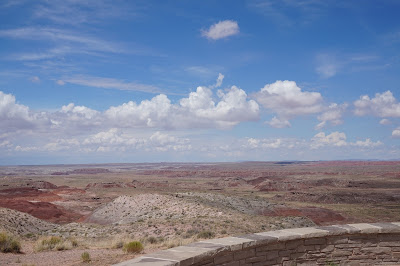 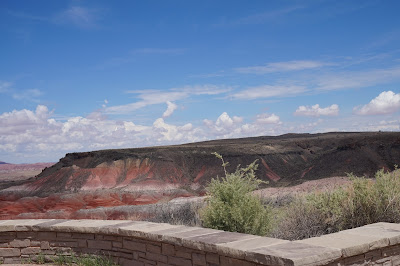 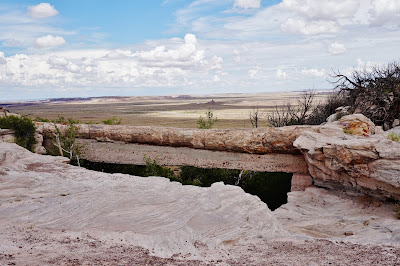 Water created Agate Bridge and will destroy it. The fossilized tree that now forms Agate Bridge grew in a lush subtropical forest 217 million years ago. When this tree died, it washed into a river and its quick burial by river sediments prevented decay. Volcanic ash dissolved and ground water provided silica, which reacted with the log and slowly crystallized it into quartz. Millions of years later, rivers and streams eroded massive layers of rock strata to expose this fossilized tree. Inevitably, water now carving the small gully under Agate Bridge will cause its collapse. The supportive concrete span, constructed in 1917, is a tenuous attempt at preservation. Water will always have its way. 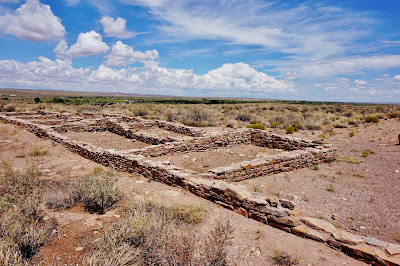 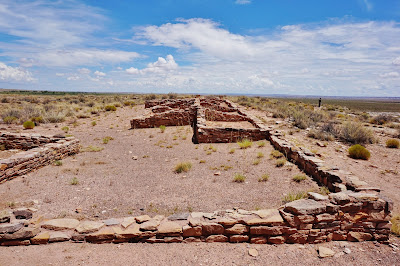 Village on the Rio Puerco is a prehistoric settlement built of shaped sandstone blocks by ancestral Puebloan people. It was inhabited between A.D. 1250 and 1380. At its peak the pueblo had over 100 rooms, with a possible population of 200 people. During the village's occupation, fields of corn, beans and squash sustained by the summer rains would have filled the river's floodplain.

Puerco Pueblo was not isolated in space or time. The river provided a travel corridor across the grasslands of the Colorado Plateau. Large and small communities existed up and down the Rio Puerco and Little Colorado River. Puerco Pueblo would have been visited by travelers and traders from far outside the ancestral Puebloan cultural area who brought different types of pottery and goods, as well as new ideas to the residents of Puerco. Researchers study these types of interactions through the wide variety of artifacts and rock art found in or near the village. 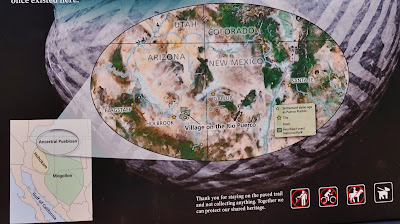 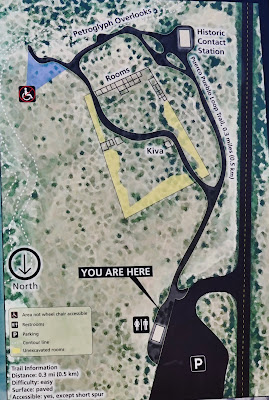 Archeologists have excavated only about a third of the site, some of which has been backfilled to preserve the fragile remnants of walls and floor features. 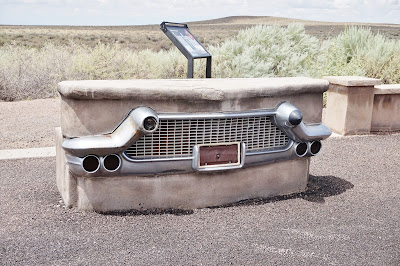 Route 66 went through the park at one time, but now the only remnant of its existence is a 1932 Studebaker that sits where Route 66 once cut through the park. Stretching from Chicago to Los Angeles, Route 66 was a destination in itself. Established in 1926, it was one of the original highways in the US Highway System. People hit the road looking for a new life or to just get away from it all. Gas was cheap and magical roadside attractions beckoned you to "get your kicks on Route 66."

Jim remembers family vacations with his family driving from Cleveland, Ohio to Los Angeles to visit family.  They had two weeks to drive from one end of the US to the other, but made time to visit the national parks along the way. Their station wagon had no air conditioning and he recalls driving through the desert at night with the windows up - yikes. 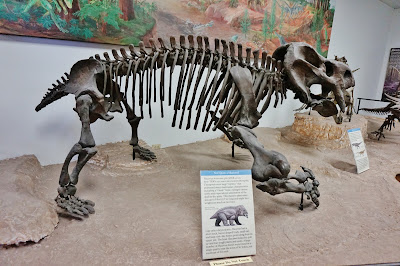 Placerias hesternus was a dicynodont therapsid. Therapsids were large reptiles that possessed many mammalian characteristics including a "cheek" bone, enlarged canine teeth, and a specialized attachment of the skull to the spine. This massive plant eater was up to 9 feet long and might have weighed as much as two tons. Like other dicynodonts, Placerias had a short neck, barrel shaped body, small tail, and large tusk like bones protruding from its upper jaw. The beak like jaws helped to pull up and tear tough plants and roots. A large number of Placeria fossils were found in a single quarry near the town of St. Johns, just southeast of the park. 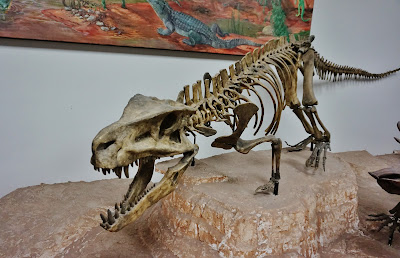 Rauisuchids ranked as the top terrestrial predators of the last Triassic, thanks to huge skulls armed with powerful biting jaws and 3 inch long serrated teeth. Some rauisuchids grew up to 20 feet in length. Rauisuchids provide an excellent example of convergent evolution. Though their body plans were similar to meat eating dinosaurs like Tyrannosaurus and Allosaurus, who lived later during the Jurassic and Cretaceous, rauisuchids are more closely related to crocodiles than to dinosaurs.

In 2011, paleontologists working in the park found the first evidence of pterosaurs, flying reptiles whose wing was comprised of one long finger and a flap of skin. The evidence consists of one section of jaw bone, some isolated teeth and a few other elements of skeleton. The cast skeleton here is of Dimorphodon, a genus of pterosaur from the early Jurassic which was probably similar in size and body shape to the Petrified Forest specimen.

Aetosaurs were three to 18 feet long, omnivorous reptiles with broad, flat bodies protected by plate-like osteoderms. Some species had large spikes on their sides or back that were possibly used for defense and species recognition. They had sturdy limbs and small skulls with a pointy snout used to root in the soil for plants, roots and invertebrates. Desmatosuchus is the largest known aetosaur reaching lengths of 18 feet. Although the first fossils of this species were found in Texas, it is relatively common in Arizona and can be found here in the Petrified Forest.


Quote for the Day: In the world there is nothing more submissive and weak than water. Yet for attacking that which is hard and strong nothing can surpass it. ~~ Lao Tzu