The driving force behind and founder of The Church of Latter Day Saints was Joseph Smith, and to a lesser extent, during the movement's first two years, Oliver Cowdery. Throughout his life, Smith told of an experience he had as a boy having seen God the Father and Jesus Christ as two separate beings, who told him that the true church had been lost and would be restored through him, and that he would be given the authority to organize and lead the true Church of Christ. Smith and Cowdery also explained that the angels John the Baptist, Peter, James, and John visited them in 1829 and gave them priesthood authority to reestablish the Church of Christ.

In 1844, William Law and several other Latter Day Saints in church leadership positions publicly denounced Smith's secret practice of polygamy in the Nauvoo Expositor, and formed their own church. The city council of Nauvoo, Illinois, led by Smith, subsequently had the printing press of the Expositor destroyed. In spite of Smith's later offer to pay damages for destroyed property, critics of Smith and the church considered the destruction heavy-handed. Some called for the Latter Day Saints to be either expelled or destroyed.

Joseph Smith and his brother Hyrum, the Assistant President of the Church, were both assassinated by a mob while in a Carthage, Illinois jail, and several bodies within the church claimed to be the senior surviving authority and appointed successors. These various claims resulted in a succession crisis. Many supported Brigham Young, the President of the Quorum of the Twelve Apostles; others Sidney Rigdon, the senior surviving member of the First Presidency. Emma Hale Smith failed to persuade William Marks, the president of the Presiding High Council and a Rigdon supporter, to assume leadership and the surviving members of Smith's immediate family remained unaffiliated with any larger body until 1860, when they formed the Reorganized Church of Jesus Christ of Latter Day Saints with Joseph's eldest son as prophet. These various groups are sometimes referred to under two geographical headings: "Prairie Saints" (those that remained in the Midwest United States); and "Rocky Mountain Saints" (those who followed Young to what would later become the state of Utah).

Today, the vast majority (over 98 percent) of Latter Day Saints belong to The Church of Jesus Christ of Latter-day Saints (LDS Church), which reports 15 million members worldwide. The second-largest denomination is the Missouri-based Community of Christ (formerly the Reorganized Church of Jesus Christ of Latter Day Saints) which reports over 250,000 members. Small denominations that trace their origins to Rigdon, James Strang, or other associates of Smith's still exist, and several fundamentalist sects which separated from the Utah LDS Church after it rejected plural marriage in 1890 claim tens of thousands of members.

Historically, the different denominations within the Latter Day Saint movement have been hostile towards or dismissive of one another; this is largely because each group claims to be the sole legitimate continuation of the one true church established by Smith in 1830. The movement began in western New York during the Second Great Awakening when Smith said that he received visions revealing a new sacred text, the Book of Mormon, which he published in 1830 as a complement to the Bible. Based on the teachings of this book and other revelations, Smith founded a Christian primitivist church, called the "Church of Christ". The Book of Mormon attracted hundreds of early followers, who later became known as "Mormons", "Latter Day Saints", or just "Saints". In 1831, Smith moved the church headquarters to Kirtland, Ohio, and in 1838 changed its name to the "Church of Jesus Christ of Latter Day Saints".

After the church in Ohio collapsed due to dissensions, in 1838, Smith and the body of the church moved to Missouri where they were persecuted and forced to Illinois. After Smith's death in 1844, a succession crisis led to the organization splitting into several groups. The largest of these, the LDS Church, migrated under the leadership of Brigham Young to the Great Basin (now Utah) and became most prominently known for its 19th-century practice of polygamy. The LDS Church officially renounced this practice in 1890, and gradually discontinued it, resulting in the Utah Territory becoming a U.S. state. This change resulted in the formation of a number of small sects who sought to maintain polygamy and other 19th-century Mormon doctrines and practices, now referred to as "Mormon fundamentalism".

Other groups originating within the Latter Day Saint movement followed different paths in Missouri, Illinois, Michigan, and Pennsylvania. For the most part these groups rejected plural marriage and some of Smith's later teachings. The largest of these, the Community of Christ (originally known as the "Reorganized Church of Jesus Christ of Latter Day Saints"), was formed in Illinois in 1860 by several groups uniting around Smith's son, Joseph Smith III. Most existing denominations that adhere to the teachings of Smith have some historical relationship with the movement. 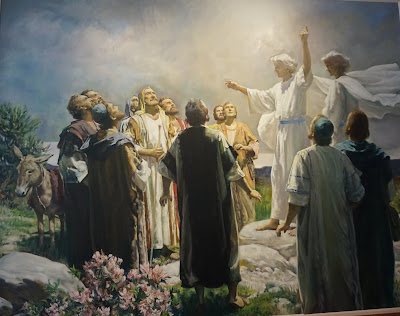 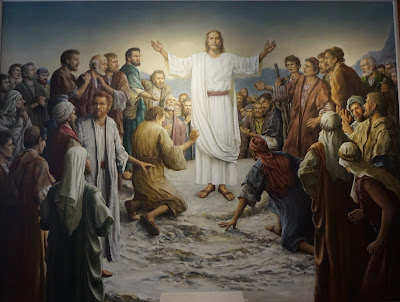 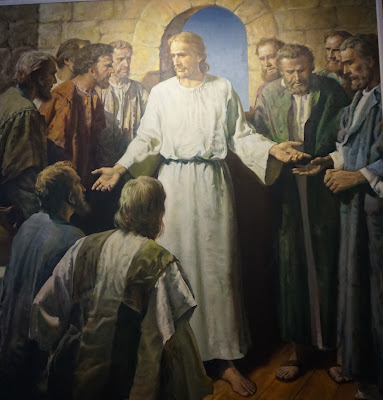 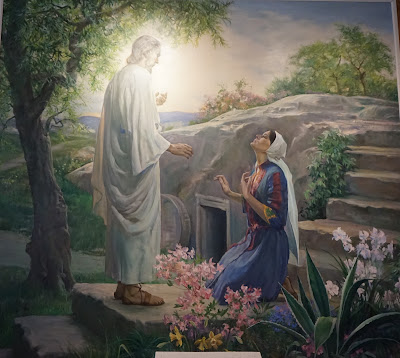 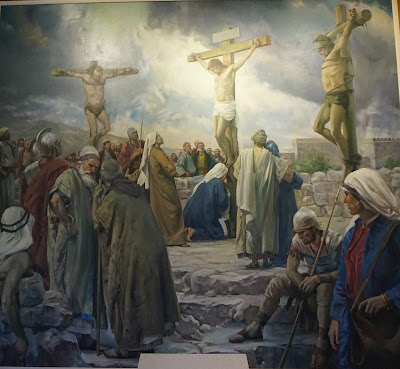 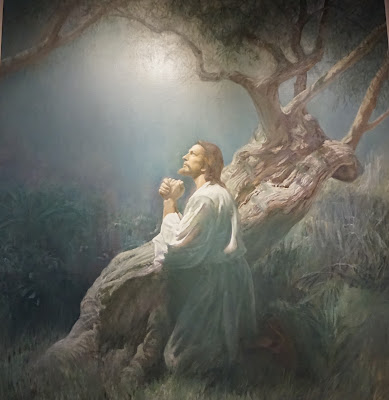 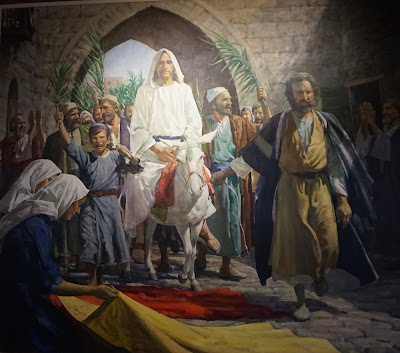 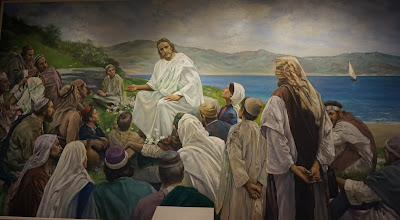 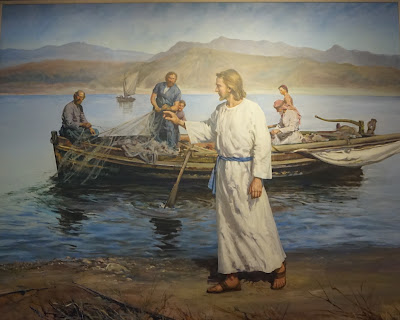 We went on a short tour with a group of people and two Sisters who told us about the various buildings and history of them as well as the story behind the statute with the sea gulls (below).

The Assembly Hall, constructed of granite stone left over from the building of the temple, was completed in 1880. It is a place of public worship, in which visitors are welcome. Although the building is used mainly for conferences of Latter-Day Saints congregations located in Salt Lake City and for other church meetings, it is also available for various cultural and civic functions. The Gothic Revival structure is 68 feet wide and 120 feet long, and the center tower is 130 feet high. The auditorium holds almost 2,000 people, with choir seats for 100. The truncated spires were originally chimneys. 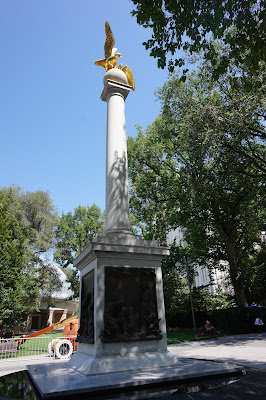 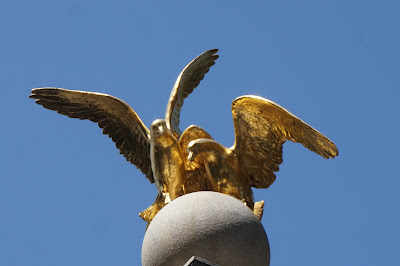 If I recall the story correctly, the history behind this statue is that the people were plagued with a hoard of crickets invading their crops. They prayed to God for help and He sent a group of sea gulls to them which ate the crickets. The crickets left, but the sea gulls stayed. 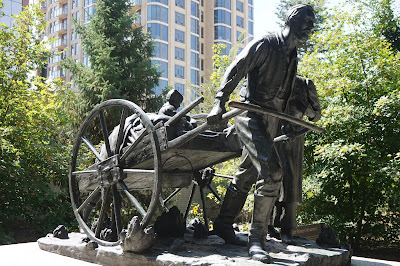 The Handcart Pioneer Monument is a tribute to the thousands of hardy Mormon pioneers who, because they could not afford the larger ox-drawn wagons, walked across the rugged plains in the 1850s, pulling and pushing all their possessions in handmade, all wood handcarts. Some 250 died on the journey, but nearly 3,000, mostly British converts, completed the 1,350-mile trek from Iowa City, Iowa to the Salt Lake City Valley. Many Latter-day Saints today proudly recount the trials and the triumphs of their ancestors who were among the Mormon handcart pioneers.


On April 6, 1893, after 40 years of sacrifice and labor, the Salt Lake City Temple was dedicated as a house of the Lord, a holy place set apart from worldly pursuits and cares. The Temple provides members of the Church with a peaceful setting where they worship God, learn of Jesus Christ, and made covenants to serve Him. In this holy setting, they receive divine instruction, learn of their potential as God's children, and receive the promise that their families can be united for eternity. 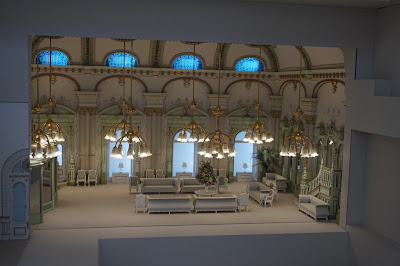 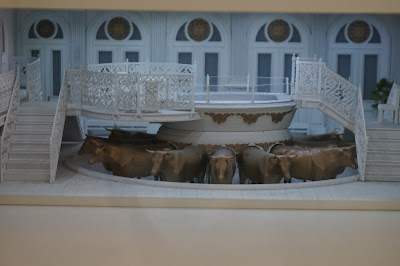 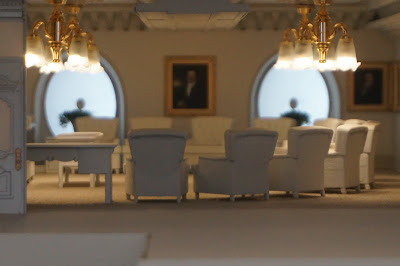 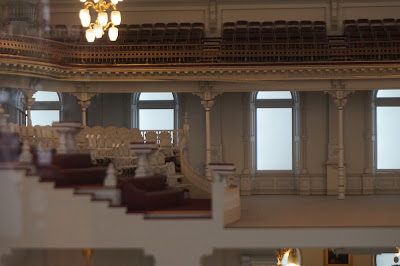 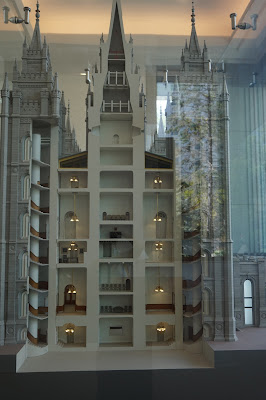 The Latter-day Saints labored with faith for 40 years to build the Temple. A flawed initial foundation, the arrival of Federal troops in 1858, and the building of railroads from 1868 to 1873 caused major delays. Severe winters, plagues, extreme poverty, the lack of effective shipping methods, and the demands of harvest and further settlement also slowed construction. But despite these difficulties, the Saints continued their labors and completed the Temple in 1893.

After traveling more than a thousand miles by wagon from Nauvoo, Illinois the prophet Brigham Young arrived in Salt Lake City on July 24, 1847.  Only four days later, the Lord showed to Brigham Young in a vision the basic design of the Temple. Reflecting on this experience, President Young said, "I scarcely ever say much about revelations, or visions, but suffice it to say . . . I was here, and saw in the spirit the temple . . . I have never looked upon that ground, but the vision of it was there."

After sketching the body of the temple and its six spires on a slate, President Young called Truman O. Angell, Sr., Architect of Public Works and Church Architect, to take his concepts of the temple and create the actual architectural drawings. Truman Angell began this work on January 22, 1853 and supervised work on the temple from 1853 until his death in 1887.


This wagon is a replica of a type of wagon used to haul granite blocks to the temple site. "Every Salt Laker ... recalls the curious spectacle of six or eight toiling oxen drawing a cart ... [with] a monster rock from the mountains. It frequently took four days to bring a single rock to the Temple Block." Deseret News, January 1, 1893.

Stonecutters usually worked in teams to cut large stones. First they drilled a series of holes using sledgehammers and chisels. Then they inserted slips and wedges into the holes and struck them each in turn until the stone split. These smaller stones were then hewn into blocks ready for transport.

Church Leaders chose to construct the temple from granite, a stone stronger and more resistant to erosion than the sandstone and adobe also considered.
Despite poverty and dangerous working conditions, the pioneers dedicated their time, strength, talents and funds to building the holy temple. The most difficult task was cutting granite from quarries in Little Cottonwood Canyon, roughly 20 miles from Salt Lake City. Though skilled craftsmen were generally compensated, others donated all or part of their labor. The entire community sacrificed in order to build a temple in which sacred ordinances of salvation could be performed. 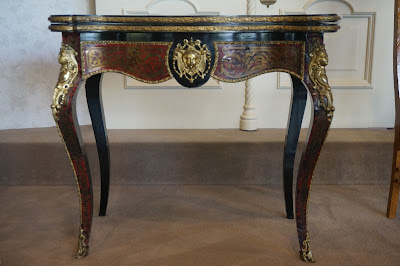 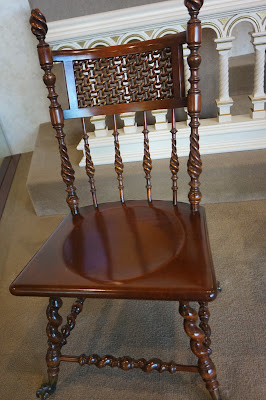 Though furnishings have been updated since the dedication in 1893, the furnishings in this display exemplify the fine workmanship still present throughout the Salt Lake Temple. 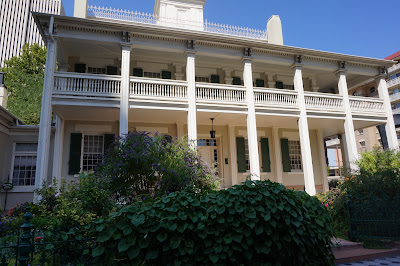 The Beehive House served as Brigham Young's residence, office and reception area for official visitors. At the time the house was built, Young was both president of the LDS Church and Utah's territorial governor. The Beehive House was designed by Young's brother-in-law Truman O. Angell. Built of stuccoed adobe, the Beehive House features a two-story veranda, an observatory, and a cupola topped with a beehive. Young's son added a three-story wing to the north when he remodeled the house in 1888. In the early 1960s, the LDS Church restored the Beehive House to resemble its 1888 appearance. 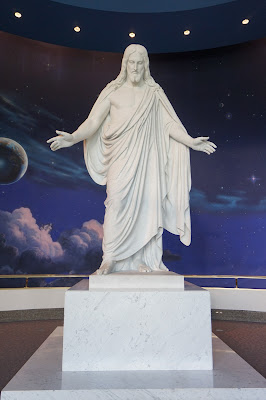 An 11-foot marble Christus statute stands in the North Visitor's Center surrounded by the night sky. It was pretty impressive. 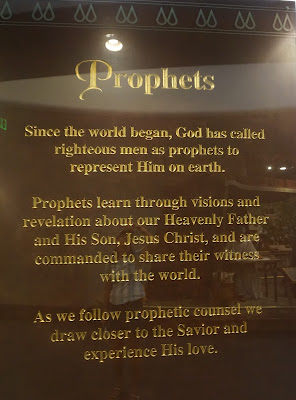 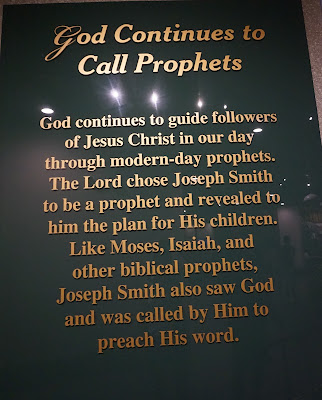 "I was one day reading the Epistle of James, first chapter, fifth verse, which reads: If any of you lack wisdom, let him ask of God, that giveth to all men liberally, and upbraideth not; and it shall be given.

"Never did any passage of scripture come with more power to the heart of man this did at this time to mine ... I reflected on it again and again, knowing that if any person needed wisdom from God, I did ...

"At length I came to the conclusion that I must ... do as James directs, that is, ask of God."