With no foothills to obstruct your view, the jagged peaks and deep canyons of the Teton Range rise abruptly from the Jackson Hole valley. This landscape was born out of an ancient past and shaped by recent geologic forces. The 2.7 billion year old rocks found in the core of the range are some of the oldest in North America, but these mountains rank among the youngest in the world.


This is the only moose that we got to see on our travels. I took the following pictures of Jenny Lake with the Teton Range in the background. 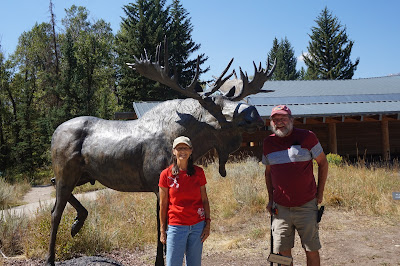 Beginning 100 million years ago, long before today's mountains formed, the collision of tectonic plates along North America's west coast bowed up a vast block of sedimentary rock deposited by ancient seas. Beginning 10 million years ago, movement on the Teton fault generated massive earthquakes causing the mountains to rise while the valley floor dropped. The vertical displacement -- from the sedimentary rocks overlaying the mountaintops to the same layers beneath the valley floor -- approaches 30,000 feet. 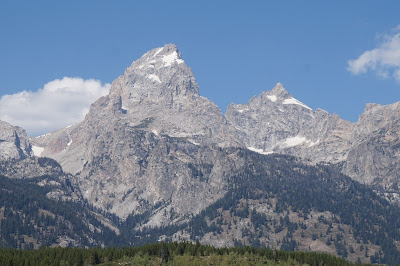 While movement on the Teton fault lifted the range, erosion sculpted the landscape. Starting two million years ago, massive glaciers up to 3,500 feet thick periodically flowed south from Yellowstone and filled the valley -- eroding mountains, transporting and depositing huge volumes of rocky glacial debris. As ice sheets filled the valley, alpine glaciers sculpted the jagged Teton skyline. These glaciers carved the peaks and canyons and deposited moraines along the glacier's edge.

Today these moraines dam beautiful lakes, like Jenny Lake, along the base of the Teton Range. The general color scheme of vegetation in the 310,000 acre park hints at this geologic story. Geology, plants, and animals interact dynamically over a large region, or ecosystem. 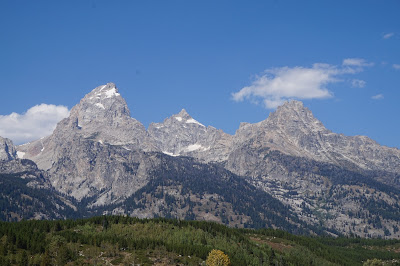 In 1911, homesteader James Manges built the cabin you see across the pasture, likely the first two-story structure in this area. A skilled craftsman, he designed the steep, overhanging roof to shed snow. The par now uses this cabin for storage and the pasture to graze horses and mules used for trail work and ranger patrols.


The Teton Glacier lies sheltered on the northeast flank of the Grand Teton. More than any other erosional force, powerful glaciers sculpted the Teton Range peaks and carved the U-shaped canyons. Beginning two million years ago, at least two periods of glaciation swept across this landscape. The ice last retreated around 14,000 years ago, unveiling an ornate tapestry of cirques, aretes and horns. Today's glaciers are remnants of a cool period called 'The Little Ice Age' lasting from 1400 to 1850 A.D. 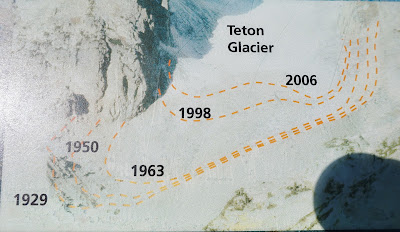 Glaciers in the Teton Range and across much of the world are retreating in response to changing climate. Since 1967, the Teton Glacier has lost 15% of its surface area. Meltwater helps support rich communities along valley streams, but today's glaciers are producing up to 10% less runoff. If current trends continue, the glaciers of the Teton Range will disappear. Their passing will be one of many transformations this landscape will experience in the face of climate change.


Built in 1925 from native lodgepole pine, the Chapel of Transfiguration served guests from the valley's dude ranches.


In 1892, Bill Menor established a homestead with ferry service for travelers crossing the Snake River as well as a general store.


Moulton Barn is one of the surviving structures built by homesteaders who settled Mormon Row after 1908. 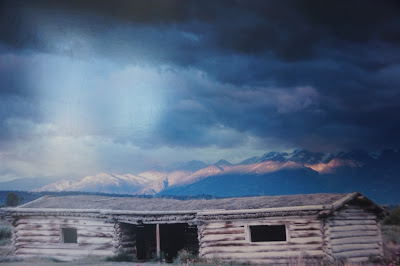 In 1888, J. Pierce Cunningham built this sod-roofed log cabin on his homestead near Spread Creek. 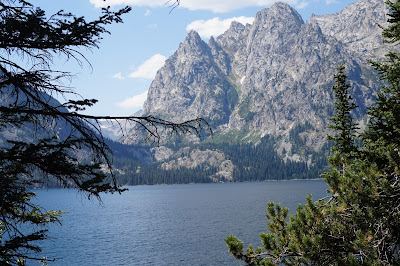 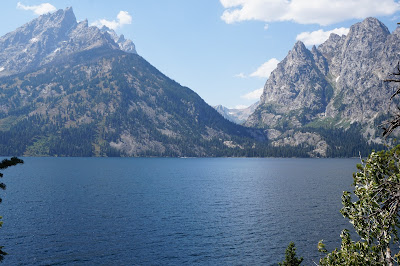 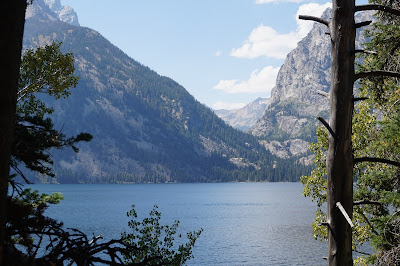 We were able to stop at String Lake and take a walk along the lake. It had a much bigger parking lot than Jenny Lake. There were lots of people at String Lake paddle boarding and kayaking. 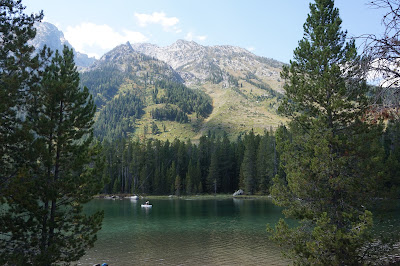 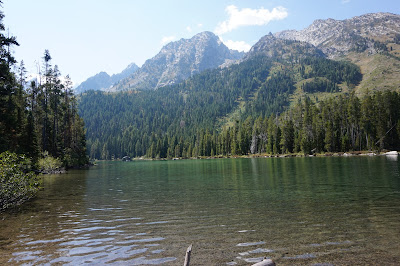 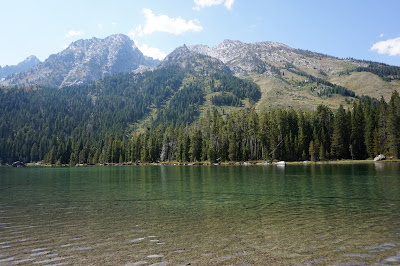 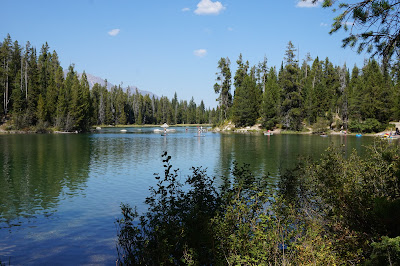 Glacial Lakes such as String Lake go through many changes. Once the lake is filled with meltwater from a glacier, the lake begins to fill with sediment. The inlet for String Lake is the outlet for Leigh Lake, just to the north. Sediment flowing out of Leigh Lake fills in the upper end of String Lake. Each winter avalanches bring a fresh crop of rocks, boulders and trees down the slope directly across the lake, helping to fill it in. Eventually String Lake will be reduced to a wandering stream flowing between grassy banks and today's lake bed will become a field of wildflowers and sedges dotted with boulders. The shrubs and trees we see will slowly move in from the edges to form groves of willow and eventually lodgepole pine stands. All will wait patiently for the next glaciers to move down out of the Cascade, Paintbrush and Leigh Canyons and begin the cycle again. 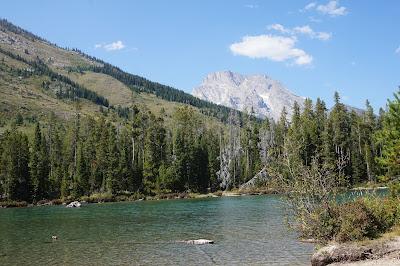 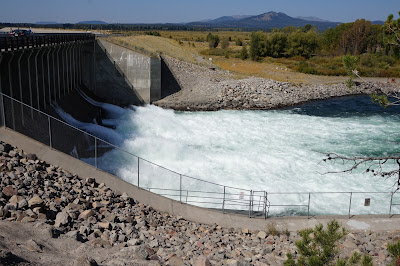 Jackson Lake Dam is a vital link in the development the water and land resources of the Upper Snake River Basin. It is operated by the Bureau of Reclamation, U.S. Dept. of the Interior. It was originally authorized for irrigation, some 1,100,000 acres of the fertile Snake River Valley, and for flood control along the Snake and lower Columbia Rivers. Outdoor recreation and and fish and wildlife conservation have become important project benefits. 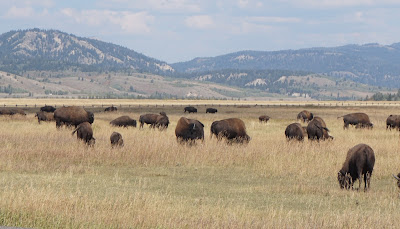 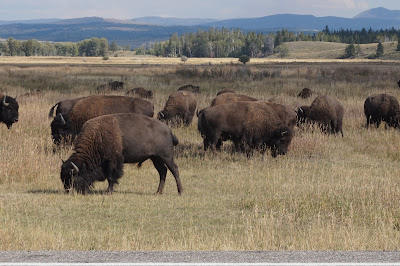 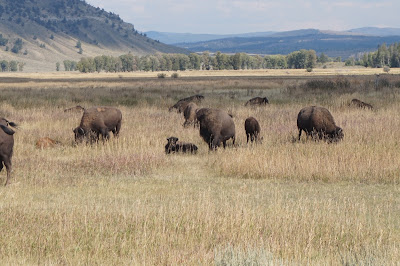 (I don't know who the person is in the picture, she was just sitting there and I took the picture as we were driving by.)