Most of us have only seen Mount Rushmore in pictures and that is how we know of it. To see it on the  mountain it looks so small against the vast background of sky and mountain. We were not able to get real close to it and Roosevelt was in the shadow due to where the sun was located. The memorial is dedicated to four of our great Presidents ~~ George Washington, Thomas Jefferson, Theodore Roosevelt, and Abraham Lincoln.

The idea of carving Presidents on the face of a mountain started as an idea to draw visitors. In the 1920s Gutzon Borglum was carving a Confederate memorial on Stone Mountain in Georgia. The memorial's backers wanted a carving and called in the master sculptor of Stone Mountain (located east of Atlanta, Georgia). 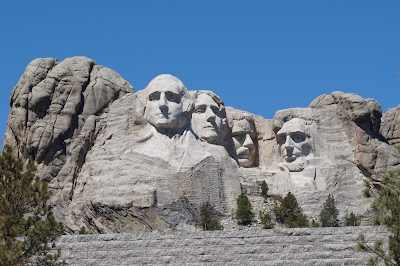 So how does one go about creating these huge giants in the Black Hills? First, Borglum based the models on life masks, paintings, photographs, descriptions, and his own interpretations. Plaster copies of the models were always displayed on the mountain as a guide for workers. But Borglum did not merely transpose the models directly into granite. The differences between the models in the sculptor's studio and the heads on the mountain show how Borglum fine-tuned the four granite giants into true works of art.

How to transfer the models to the mountain? Borglum used his "pointing" machine: the models were sized at a ratio of 1:12--one inch on the model would equal one foot on the mountain. Borglum's work was truly a work of art, and very magnificent. 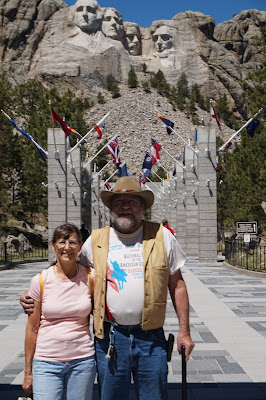 The carving of George Washington's head is as tall as a six-story building. If his body was carved from head to toe, the height of the full figure would be 465 feet. The dimensions of head: Forehead to chin--60 feet; Width of eye--11 feet; Length of nose--20 feet; Width of mouth--18 feet. 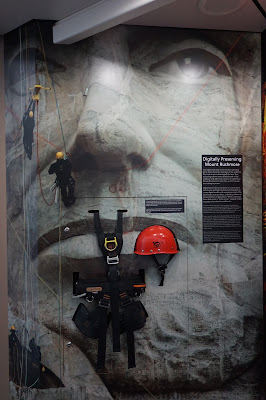 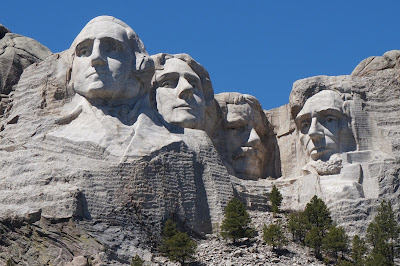 Borglum picked Mount Rushmore, which was named for New York lawyer Charles E. Rushmore. The wall of exposed granite faced southeast to receive direct sunlight for most of the day. Borglum made his name through the celebration of things American. To him, "American" meant "big." Borglum choice of subjects promised to elevate the memorial to a national cause "in commemoration of the foundation, preservation, and continental expansion f the United States." Borglum envisioned four U.S. presidents beside an entablature inscribed with a brief history of the country. In a separate wall behind the figures, a Hall of Records would preserve national documents and artifacts. 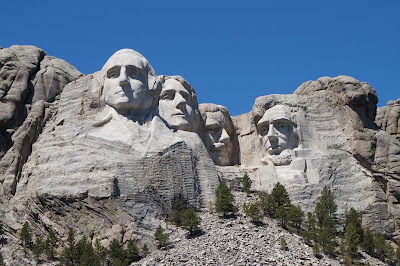 I learned something new about Mount Rushmore that I wanted to add to my blog, so I am doing an update. It's a Hall of Records hidden behind Lincoln's head. It is a 70-foot long chamber containing enamel plates documenting American history, sealed in a teakwood box in a titanium vault.

Work began in 1938 with workers blasting a 70-foot-long cavern using dynamite. The government was wary of the ambitious project, and insisted that Borglum finish the heads before he continued working on the Hall of Records. But Borglum died unexpectedly in 1941, and though his son put the finishing touches on the sculptural portraits (originally intended to depict the presidents to their waists), the Hall of Records project was abandoned.

The unfinished hall sat empty and untouched for decades. Then in 1998, 16 porcelain panels were placed inside the chamber. They describe the construction of the Mount Rushmore Memorial and why those presidents were chosen, and document a history of the United States. These are intended not for the general public, but as a time capsule for people of the distant future, as the sculptor intended.

The panels are sealed inside a teak box inside a titanium vault, covered by a 1,200-pound granite slab carved with a quote from Borglum’s original plans: “…let us place there, carved high, as close to heaven as we can, the words of our leaders, their faces, to show posterity what manner of men they were. Then breathe a prayer that these records will endure until the wind and rain alone shall wear them away.” 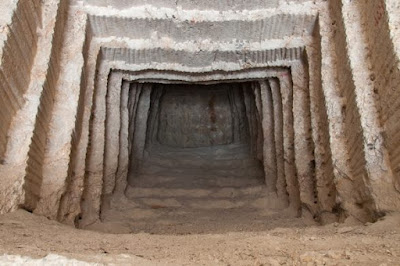