Stopped in Sundance, Wyoming for a couple of days so we could visit Devils Tower National Monument, about 23 miles northwest of Sundance. Devils Tower started forming about 50 million years ago and over the next millions of years, erosion of the sedimentary rock exposed Devils Tower. The Tower rises 867 feet from its base and stands 1,267 feet above the river and 5,112 feet above sea level. The area on top is a tear-drop shape and is 1.5 acres. The diameter of its base is 1,000 feet. Approximately 1 and 1/2 vertical miles of rock and sediment have washed away since the Tower formed. 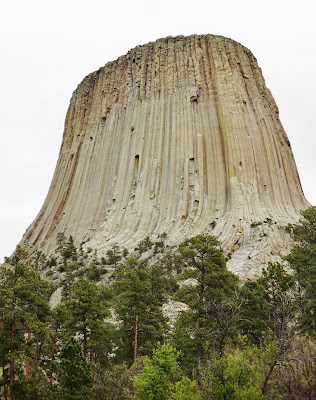 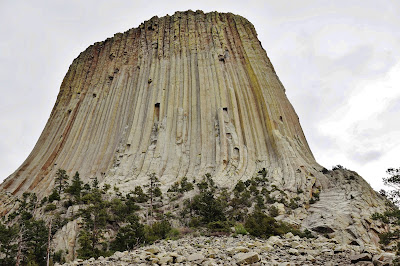 Climbers come to Devils Tower to climb it; they have to go up and come back down the same day. They are not allowed to stay overnight. There were a few climbers the day we were there. If you look at the pictures just below about mid way you will see some people ~ look for red shirts.

The National Park Service considers climbing to be an acceptable recreational use and also recognizes the Tower as a sacred site to many American Indian peoples. Out of respect for traditional cultural practices a voluntary climbing closure is in effect in June every year. 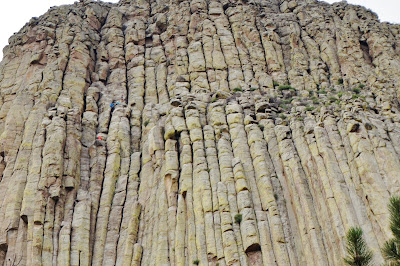 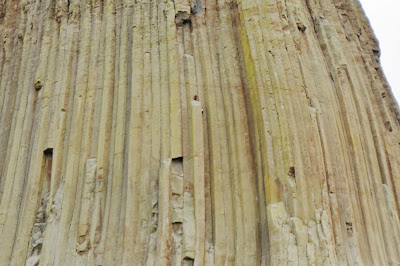 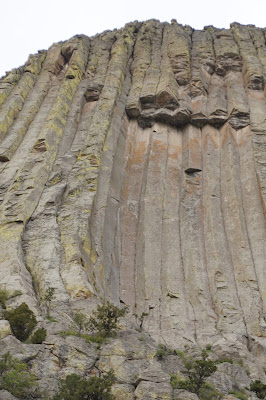 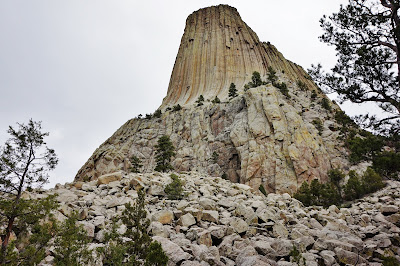 Look at the columns that rise from the base to the top. They break off all the time as there are huge boulders all around the base. Devils Tower is composed of symmetrical columns which are the tallest (some more than 600 feet) and widest (10 to 20 feet) in the world. Along this trail, columns lie toppled among the pine trees. They are 4-, 5-, 6-, and 7-sided. 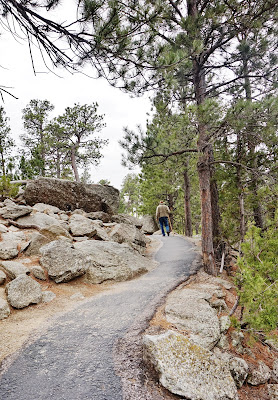 Scientists have been trying to figure out the origin of Devils Tower. There are a few theories regarding the origin, and two are agreed upon:

(1) The Tower is composed of igneous (previously molten) rock called phonolite, which formed approximately 1.5 miles below the earth's surface when magma pushed up through the sedimentary rock layers about 50 million years ago; and (2) over millions of years, erosion stripped away the softer layers of sedimentary rock, exposing the Tower as we now see it.

Ancient rivers took millions of years to excavate Devils Tower. The waters carried away softer sedimentary rocks leaving behind the harder igneous rock. The rock type is found here in northeastern Wyoming, and central Montana, but mostly in east Africa. The Tower is still emerging. The Belle Fourche River continues to wash away the softer sedimentary rocks. Plateaus across the valley ~ some higher than the Tower's summit ~ are eroded layers of the same sediment that once surrounded and covered Devils Tower.

The Cheyenne have a different version of the creation of Devils Tower. The below picture is an artist's representation of the story, which goes as follows:

Before the Kiowa came south they were camped on a stream in the far north where there were a great many bears, many of them. One day, seven little girls were playing at a distance from the village and were chased by some bears. The girls ran toward the village and the bears were just about  to catch them when the girls jumped on a low rock, about three feet high. One of the girls prayed to the rock, "Rock take pity on us, rock save us." The rock heard them and began to grow upwards, pushing the girls higher and higher and higher. When the bears jumped to reach the girls, they scratched the rock, broke their claws, and fell to the ground. The rock rose higher and higher, the bears still jumped  at the girls until they were pushed up into the sky, where they now are, seven little stars in a group (The Pleiades). In the winter, in the middle of the night, the seven stars are right over the high rock. When the people came to look, they found the bears' claws, turned to stone, all around the base. No Kiowa living has ever seen this rock, but the old men have told about it - it is very far north where the Kiowa used to live. It is a single rock with scratched sides, the marks of the bears' claws are there yet, rising straight up, very high. There is no other like it in the whole country, there are no trees on it, only grass on top. The Kiowa call this rock "Tso-aa", a tree rock, possibly because it grew tall like a tree. 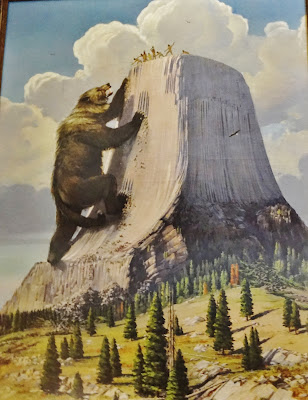