Just cannot imagine living in a cave like the prehistoric people did. It gets darn cold up here in northern Alabama and to live in a cave with just fire for heat and hardly any clothes makes for hard living. Russell Cave was their refuge from the elements though; it faced east, away from the cold north winds but letting in the morning sun. It would be cool in summer. There was a spring next to their cave which bubbled out of the ground and into the cave, giving them fresh water. 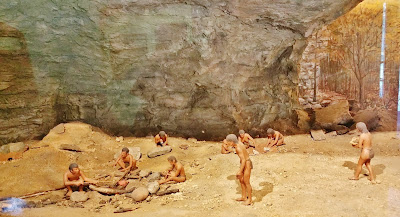 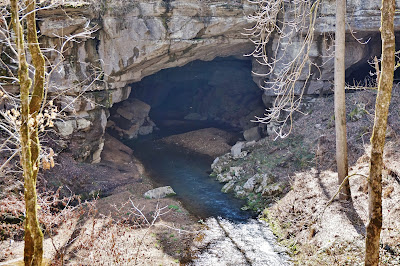 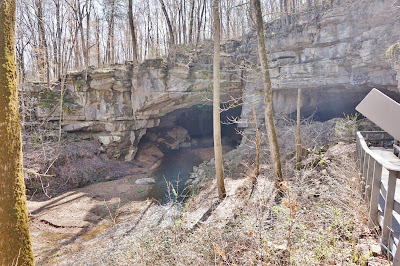 This picture shows where the water runs into the cave, and the cave where the people actually lived was just beyond where the fence is shown. 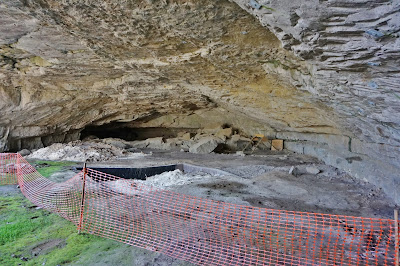 This is the actual part of the cave where the people lived. It's hard to visualize because the upper part shown here is some 30 feet above the original area where they lived. The Smithsonian Institution, with support from the National Geographic Society, dug here from 1956 to 1958 and reached a depth of more than 32 feet. So the above picture which depicted them living in the cave was really a lot lower than what we are looking at in this picture.

The people of Russell Cave lived there about 10,000 B.C. to 500 B.C. through the Paleo and Archaic Periods, or about 9,000 years. Of course, it is speculation about what these people did, but through excavation they found tools and pottery, thereby figuring out what they did for food and living. They hunted deer, turkey, black bear, turtle, raccoon, squirrel, and other small animals. They also fished and foraged in the surrounding forest. 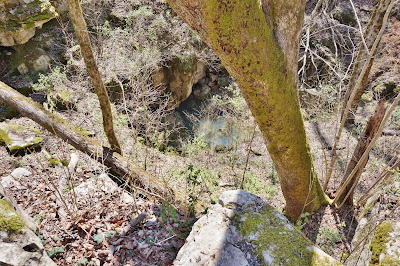 This is a sink hole. It's hard to see from way up high, but the hole down there is considered a sink hole. It's said that water attacked and slowly carried away the limestone to form a cavern. When the roof became too expansive to support itself, it collapsed to create this crater like sinkhole. It was through this process that daylight first entered Russell Cave. Water still courses beneath the ground, molding and shaping the face of our planet.