The Ave Maria Grotto is known throughout the world as "Jerusalem in Miniature." It is located at the St. Bernard Abbey in Cullman, Alabama. The Abbey was founded in 1891 and Brother Joseph Zoetl, a Monk of the Abbey for almost 70 years, is the Monk responsible for constructing the Grotto. Begun as a hobby, he used various materials he could find. With infinite patience and a remarkable sense of symmetry and proportion, Brother Joseph recreated some of the greatest edifices of all time. 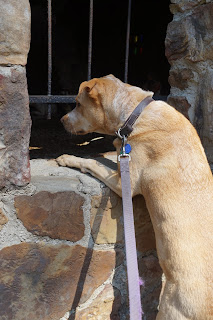 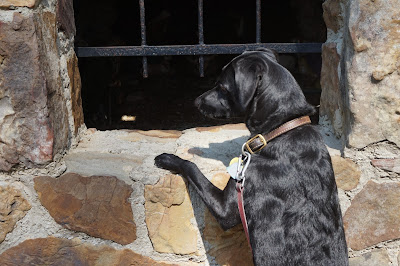 The Cave in Bethlehem where Jesus Christ, our Lord and Redeemer, was born. The baby Jesus is in the crib. Mary and Joseph are beside him. Hayley & Lucy also enjoyed this exhibit. I don't know what they saw, but I think they must have smelled critters in the exhibit. It was kind of dark and musty in there - a great place for critters to call home.


Brother Joseph gathered the ideas for his work from extensive readings of history and the Bible -- and from his wonderful imagination. Of all the factual replicas constructed, he had seen only about six: those in his home town of Landshut, Bavaria, and those at St. Bernard Abbey.


The Tower of Thanks was constructed to thank Brother Joseph's friends who sent him materials for his works. The green glass balls on top are Irish fishing net floats.
The Shrine of Peter was constructed of pumice stone, seashells, marbles, pieces of petrified wood and stone.  Pumice stone, a light and spongy type of rock, floats on water. Thus, its use in the Shrine of Peter brings to mind Peter's walking on the water.


Montserrat Abbey is a famous Benedictine Abbey located about 30 miles northwest of Barcelona, Spain. Montserrat consists of jagged pinnacles and spires rising from the base of the mass, which is cloven by ravines, and abounds with precipices. The mountain is named in allusion to its jagged appearance. Spanish legend holds that this occurred at the time of the Crucifixion, when the rocks were rent. The monastery stands 2,910 feet high on the edge of Valle Malo. It owes its existence to an image of the Virgin, said to have been carved by St. Luke and brought to Barcelona by St. Peter in 30 A.D.

When the Moors invaded the province in 717 the image was hidden in a cave at Montserrat. In 880 Gondemar, bishop of Vich, was attracted to the cave by sweet sounds and smells, he found the image and was in the process of taking it to Manresa, however, at a certain spot the image would go no further. It was deposited there and a chapel erected around it. The church is visited annually by more than 60,000 pilgrims. The Benedictines who dwell at the Monastery of Montserrat conduct a famous choir school for young men and are guardians of the Catalonian culture.


With loving eyes Christ gazes upon the world, asking men to take up the cross and follow him. Shrines like this are common throughout the countrysides in southern European and Latin countries. Here travelers like to stop for a prayerful moment before continuing their journey. The six-pointed star signifies the House of David, from which both Mary and Joseph were descended.

St. Martin's Church in Landshut, Bavaria; tallest brick tower in the world at 432 feet.
Upon becoming an American citizen, Brother Joseph built this shrine in honor of his adopted country. The Statute of Liberty was donated to the citizens of the United States by the people of France. It is the largest statute in the world, weighing 450,000 pounds. In 1924 the Statute became a National Monument.


The little angels kneeling on each side of the structure are supported by cold cream jars. Above the main alter you will see that Brother Joseph has managed to make an old flashlight tube serve a decorative purpose. Note the cute little open air organ to the right.

The mysterious tower located in Newport, Rhode Island has baffled history scholars for years. It is believed to be the remains of a church built by Irish missionaries around the year 1200. The tower was probably the center of a church patterned after that of the Holy Sepulchre in Jerusalem.

One thinks of Mary Magdalene looking up at her crucified savior. In a wider sense, the woman also represents all of humanity, redeemed through the blood of Christ. The scene also recalls the famous hymn "Rock of Ages" written in 1775 by Rev. Augustus Toplady, an Anglican clergyman.


Basilicas, temples and catacombs ~ St. Paul's Outside the Walls, St. Agnes, St. Lawrence, The Vestal Temple, Tomb of St. Petronilla, St. Sixtus Chapel, and in the upper right, The Leaning Tower of Pisa (the bell tower of the Cathedral in Pisa, Italy.)

Fortress of Antonio where our Lord spent the night in jail after his arrest in the Garden of Gethsemane. He was mocked, scourged, and crowned with thorns. From the balcony of this building, Pilate showed Jesus to the people thinking that when they beheld him all covered with blood, they would be moved to pity and ask for his release. "Behold the Man," cried Pilate. The people replied, "Crucify Him."

St. Therese, commonly known as "The Little Flower" was born in 1873. She died in 1897 and in 1925 was canonized as a saint. Her claim to sanctity lay in her perfect performance of the ordinary daily tasks which fell to her lot. This mode of life is popularly known as "the little way of St. Therese." She was declared patroness of the missions by Pope Pius XI. 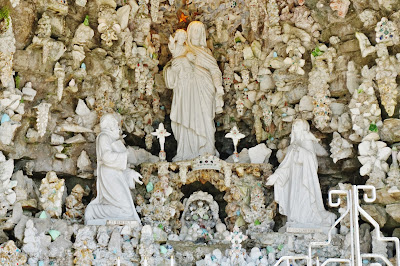 The Ave Maria Grotto stands 27 feet high, 27 feet wide, and 27 feet deep.  The structure was built with bits of crushed glass, stone and cement. There stalactites which hang from the ceiling. Standing with the Child Jesus in her arms, The Virgin Mary is known in this image as Our Lady of Prompt Succor, or Our Lady of Quick Aid.


St. Joseph is called "Protector of the Universal Church." He is the foster father of Christ. On top of this small grotto a cross is embellished with a star of David to symbolize the merging of the Old and the New Testament. St. Joseph, venerated as a model for fathers is also the patron of workers.

This is considered the "Little Jerusalem."  The Pool of Bethsaida is where Christ cured the crippled man, who had remained at the pool for many years hoping to be made well when the Angel stirred the water. 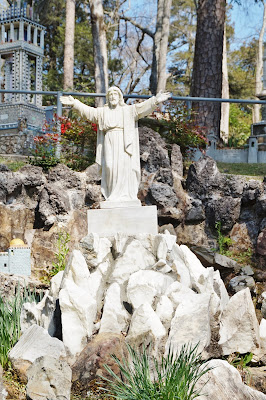 The Hanging Gardens of Babylon are considered one of the Seven Wonders of the World. Their construction was attributed to King Nebuchadnezzer (604-561 B.C.). The story goes that he married a Grecian princess but, disliking the flat barren plains of Babylon, she longed for the mountainous beauties of her homeland. In order to make her happy, the king constructed the Hanging Gardens, which were said to have formed a square of four acres. To the right is a replica of the tomb of the Pharaohs ~ the pyramid. Within this massive structure the kings of Egypt were buried.

The Crucifixion Tower is a Wayside Shrine commemorating Our Lord's death on the cross.

This shrine, dedicated to our Lady of Fatima, recalls the appearances of the mother of our Lord to three small shepherd children at Fatima in 1917. During these apparitions the Blessed Virgin predicted World War II and the spread of atheistic communism all over the globe. To counteract this, she requested prayers and penance in reparation for the sins of men. 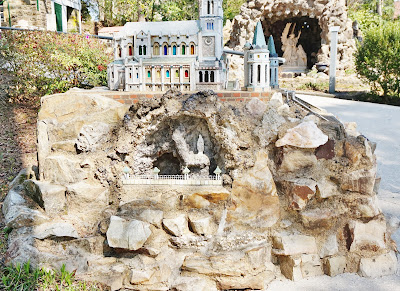 Lourdes, France. On February 11, 1858, the Virgin Mary appeared to 14 year old Bernadette Soubirous. Today a huge church stands on this site and many miracles have occurred there.

This church was built on Tepeyac Hill near Mexico City, the site of the Virgin Mar's apparition to Juan Diego in 1531. It was completed and consecrated in 1709 and became of one the world's most popular Marion shrines. While it is still in use today, because of a sinking foundation, it was replaced as the main church in 1976 with a new Basilica that would accommodate up to 50,000 people.


This shrine is dedicated to graduates of St. Bernard College who were killed in World War II. They are commemorated by the 29 small crosses to the left.

In the small cave is a statue of Christ suffering in the Garden of Gethsemane the night before he died. "And his sweat became as drops of blood running down upon the ground." Luke 22:44