Carlsbad Caverns began about 250 million years ago.  A 400-mile long reef in an inland sea covered the area.  This reef formed from the remains of sponges, algae, and seashells and from calcite that precipitated directly from the water.  Cracks developed in the reef as it rose and eventually the sea evaporated, and the reef was buried under deposits of salts and gypsum. An uplift began and uncovered the buried rock reef and formed the Guadalupe Mountains.  As the mountains were pushed up the rooms and passages in the cave were being formed. This process created horizontal levels connected by steep passages.  Stalactites, stalagmites and other formations began over 500,000 years ago, drop by drop. It's amazing walking through the caverns seeing all the different formations that were formed.
It's a chilly 56 degrees in the caverns and I was glad I took my jacket.  Jim was brave and walked the whole way in just his t-shirt. 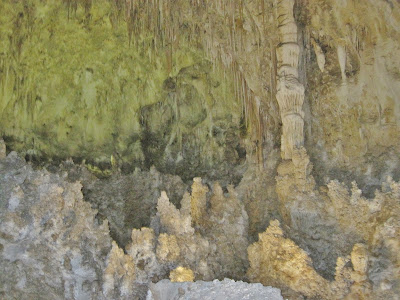 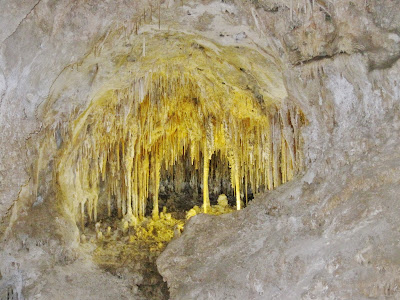 Stalactites, stalagmites and other cave deposits made chiefly of calcite are called "decorations" or "speleothems." Speleothems form when groundwater containing calcium bicarbonate solution seeps into the cave. When the solution becomes exposed to cave air, carbon dioxide gas is released, and calcite is deposited. "Soda straws" are thin, hollow stalactites formed by dripping water.

In one section of the cave the Mexican free-tailed bats live. They migrate from Mexico in the summer each year to give birth and raise their young. As many as 300 bats may crowd into one square foot. At night the young are left in the cave while the adults leave to feed.  There are thousands of bats in this cave and every night around sunset during the summer the Caverns allow people to view the exodus.  We did not get back to view the bats leaving the caverns, but one day I would like to get back there to see it.
These giants began as small deposits on the cavern floor. Gradual accumulation of calcite from dripping water caused them to grow in height and girth. Giant Dome was was once a stalagmite like the Twin Domes. Having grown high enough to touch the ceiling, it has become a "column."
﻿
Posted by Gayle Kerch at 10:44 PM