Visiting the Studebaker National Museum was fascinating ~ seeing all the cars the company built through the years. I was not sure how much I would like it, but I did like seeing all the old cars, and I know Jim enjoyed it a lot.

This is the history of how the Studebakers eventually began their automobile business: the Studebaker family were actually blacksmiths, first in Germany and then in the United States. In 1736, five Studebaker family members arrived in Philadelphia, where they continued their craft. They ran their business in Gettysburg but left in 1836 and headed for Ashland, Ohio. Then brothers Henry and Clement moved to South Bend and opened a blacksmith shop in 1852. Their business actually began with the Civil War when they accepted a contract for 100 army wagons, and then they received other military contracts. 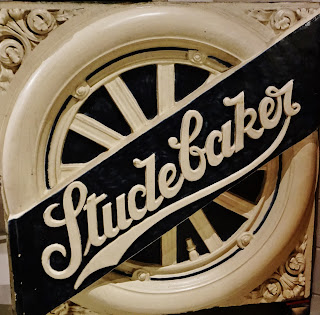 In 1881 Studebaker exported wagons to Africa, and the company pursued international markets. By the mid-1880s, the Studebaker Brothers Manufacturing Company was the world's largest manufacturer of horse-drawn equipment. Fairs and expositions were attractive advertising venues in the days before radio, television and the internet. The public viewed products in competitive displays and top awards offered great promotional value. At the United States Centennial Exhibition in 1876, the Studebaker Brothers Manufacturing Company took home a First Award of Merit. From then on Studebaker dominated every competition it entered.

The Columbian Exposition Wagon was also known as the "Rosewood Wagon" and the "Aluminum Wagon" because of its rosewood box and extensive use of aluminum. The box is inlaid with holly, and inset are 3 medals won by the company at fairs and expositions during the previous 40 years. The lumber for the wagon's box came from Belmonte, Brazil, and the running gear is made from Indiana Hickory. All metal on the wagon with the exception of the tires and springs is solid aluminum. The wagon took over 4,000 man hours to build.

John C. Studebaker built this wagon to move his family from Pennsylvania to Ohio. The box is original to this wagon but the running gear was replaced in the late 1880s.

Built in 1857, it is the oldest surviving Studebaker vehicle. Studebaker acquired this Phaeton for the company's historic collection in 1908. 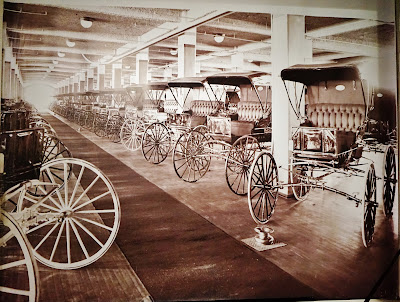 The station wagon took its name from vehicles used to transport people and luggage from a train station.

Studebaker discontinued all buggy manufacturing in 1919, and ended production of its remaining horse drawn vehicles in 1920. This is the last buggy manufactured by Studebaker, and was immediately placed in the company's museum upon completion. 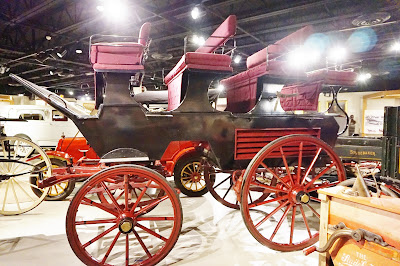 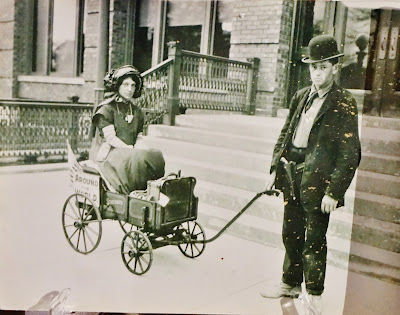 The Studebaker Junior was manufactured by South Bend Toy Company and was sold through Studebaker outlets. Production continued until 1942 and was available with sled runners for winter use.

The United States government commissioned this carriage for Revolutionary War hero Marquis de Lafayette's tour of America in 1824. It was on display in St. Joseph, Missouri in 1889 when the building it was in caught fire. Members of the Apache Indian nation camping nearby awoke to the flames and saved the carriage from destruction. Lafayette's Barouche is the oldest and most deteriorated of the "Save America's Treasures" vehicles. Evidence indicates that the yellow and green livery is original; the bird painting on the dashboard was uncovered during conservation. 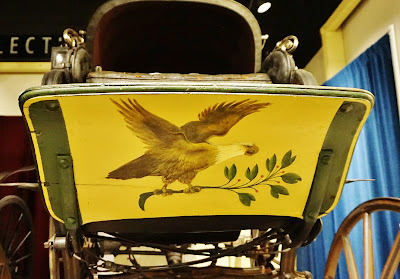 First credited as a Studebaker carriage, a label for Brewster & Company of New York was discovered during restoration. President Grant did use a Studebaker Landau during an 1879 visit to Chicago, which may have cause the incorrect assumption. Studebaker Brothers bought the carriage in 1910.

Lincoln is running late to catch "Our American Cousin" playing at Ford's Theater on the night of April 14, 1865. He and his wife Mary leave the White House and walk to this carriage. Lincoln tells the coachman, "I prefer to ride by ourselves today." He drives through the streets of Washington, D.C. They talk about their futures, both happy to focus on something other than war. They pick up their guests and arrive at Ford's Theater about 8:30 that night. It is the last vehicle Lincoln rode in alive.

The volunteer at the desk told us that when Lincoln's Barouche goes on display at the Smithsonian, the task of boxing it up and transporting it, is quite an undertaking. It even has a police escort from Indiana to Washington.

President Benjamin Harrison purchased this and four other Studebaker vehicles in early 1889 for his use while President. The Brougham remained in the Harrison family until 1917, when Mrs. Harrison gave it to the Indianapolis Navy League. The Studebaker Corporation purchased it from the Navy League in 1918.

The summer of 1900 was unusually hot. Rather than suffer in Washington, D.C., the President spent much of it at his family home in Canton, Ohio. He had the Phaeton made for him to ride around town. In early September 1901, President McKinley rode it to the Canton railway station and boarded a train for the Pan-American Exposition in Buffalo, New York. Leon Czolgosz, a man who believed all forms of government corrupt, stood in line to greet the President. As McKinley reached to shake hands, Leon fired two shots. One missed; the other hit McKinley in the stomach. He died eight days later.


In 1909 the United States government commissioned Studebaker to supply two electric vehicles to ferry people between the newly completed Senate Office Building and the U.S. Capitol. The route was via an underground tunnel which precluded the use of an internal combustion vehicle. The tunnel's space restrictions prevented the vehicles from turning around, so they were equipped with controls facing in both directions, hence the name "Backward-Forward Car." For return trips, the driver simply switched seats to the opposite facing controls. The cars were originally equipped with solid rubber tires, but were later fitted with pneumatic tires, resulting in a much smoother ride. The two cars were nicknamed "Tommy" and "Peg." They had a top speed of 12 miles per hour and could carry 11 passengers. They remained in service until 1912 when a rail system was installed. They were officially retired in 1915. "Tommy" is on display at the William E. Swigart, Jr. Automobile Museum in Huntingdon, Pennsylvania.

The Flanders "20" was Studebaker's entry-level model for 1912. It was available as either a four-door touring car or a two-door roadster. Over 30,000 Flanders automobiles were built between 1909 to 1912.

This Big Six was purchased new in Santa Barbara, California, where it logged more than 90,000 miles in less than two years. By 1923 it traveled over 390,000 miles, primarily on unimproved roads. Studebaker reacquired the car in 1924 for promotional purposes.

With infant mortality being significantly higher in earlier times, some funeral homes used special hearses for children's services. A child's hearse was white to represent a child's innocence. It was owned by the Miller Funeral Home of Brazil, Indiana. It is the only Studebaker child's hearse known to exist. This hearse was used for only one funeral. It later served as a flower delivery service.

The body is made entirely of aluminum, with a fold-up windshield and built-in visor. The interior is trimmed in teak, with mohair upholstery.

The name Phaeton is a holdover from Studebaker's carriage days. It originally designated a carriage with a nominal body and large, lightly sprung wheels.

Studebaker's attempt at a small car was the Erskine, named for Studebaker's President Albert R. Erskine.

In 1927 David Abbot "Ab" Jenkins drove this Commander sedan from New York to San Francisco in record time. Jenkins left New York at 8:00 pm on August 30, and arrived in San Francisco at 10:40 pm on September 2. He covered 3,302 miles in 77 hours and 40 minutes, besting the existing record by one hour (which was actually his own record, set one year earlier).

In October 1927, three Studebaker Commanders established new speed and endurance records at Atlantic City, New Jersey. This Commander traveled 25,000 miles in under 23,000 minutes (15.97 days) at Atlantic City, averaging over 65 miles per hour. The car subsequently toured the country as part of a Studebaker promotional campaign.


Often referred to as one of the most beautiful automobiles ever produced, the 1953 Starliner is Studebaker's masterpiece. The three-pointed star on the front was unique to the early models. Studebaker changed the emblem after a complaint from Mercedes-Benz. 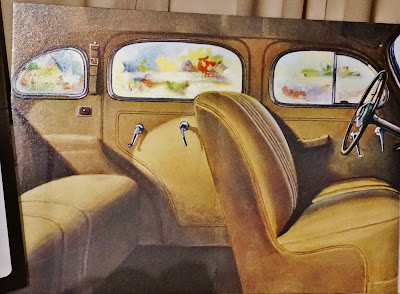 Helen Dryden was a pioneer in the field of automobile design. She worked for Vogue magazine beginning in 1910 until 1924; she was a renowned Broadway costume designer, and by 1929 she was the highest paid female illustration artist at $25,000 per year. Her first foray into automotive work was designing interior fittings for Dura Company and later consulting on designs for Buick and Marmon. Studebaker retained Ms. Dryden in 1935 to assist in marketing towards female consumers. Her designs were noted for their simplicity and sleekness. She remained with Studebaker until 1938. 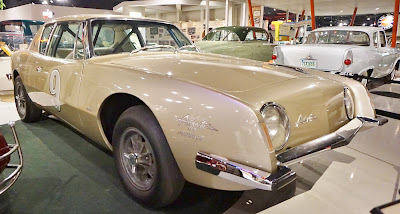 This Avanti recorded 170.81 miles per hour at the Bonneville Salt Flats in September of 1963. It was one of a team of Studebakers sent to Bonneville to capture speed and endurance records. It is the only car remaining from that campaign still in its original configuration. It is fitted with a full roll cage, extra instrumentation, and its original Bonneville wheels and tires.

This is one of two identical Studebakers used in the 1979 The Muppet Movie. It was modified with trunk-mounted controls so that the operator was hidden while Muppet characters "drove" the car. The filmmakers chose the car because of its distinct "bullet nose." The driver watched the road via a video monitor connected to a camera in the car's bullet nose. 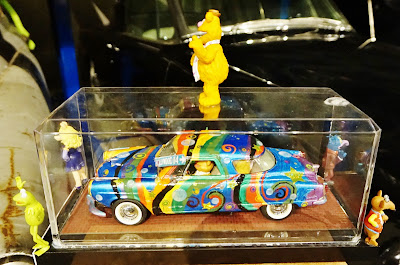 And of course, our museum visit would not be complete without a ride in a Studebaker . . . 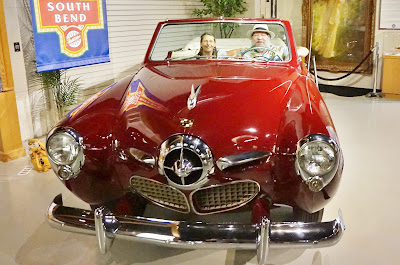