Well, I found another interesting museum with tools that played an important part in the development of our country ~~ the windmill. The Mid-America Windmill Museum has been around for over 25 years and are always getting new windmills for their exhibit. There are a total of fifty-two windmills that have been restored and are on exhibit in the museum barn or outside on the museum grounds. A highlight of the museum is a replica of the Robertson Post windmill, a single stone grist mill with a 52 foot diameter wind wheel. The original Robertson was shipped from England and erected on the James River near Jamestown, VA. in the 1620's. 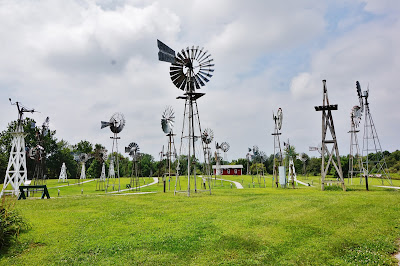 The windmill was first used for grain grinding in the colonies, and most important in the settling of the heartland and the great plains as the means of pumping water. Even the railroads were dependent on the windmill as they expanded westward. Power mills provided energy to help us with our domestic needs. 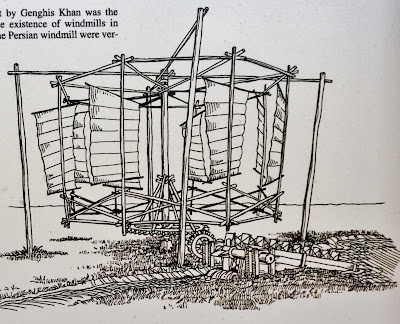 Windmills were used in Persia after the 12th century. Probably the invasion of the near east by Genghis Khan was the means of reports back to China of the existence of windmills. The Chinese wind pumps, like the Persian windmill. The Chinese improved the efficiency of the vertical axis windmill by opening all the sails to the exposure of the wind, by changing the design of the sails so that those sails on the side advancing into the wind can be "feathered" or rotated so as to present the least surface and resistance to the wind. This is similar to the sails of the Chinese junks. These windmills are still used today along the Eastern coast of China for pumping water for irrigation or salt water for salt pans. 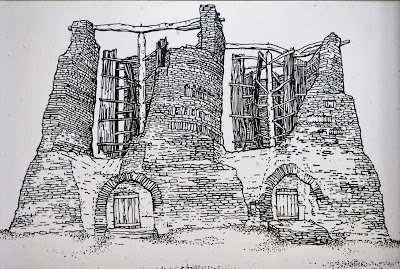 The first record of a wind powered mechanism was the Persian windmill. Built in the deserts of Persia (now Iran) sometime in 100-400 A.D. There are still windmills of this type in the Seistan Province at the border between Iran and Afghanistan where the wind blows steadily and from the same direction beginning in mid-June for about 120 days. In the same area, there is said to be a "bank" of 30 to 40 windmills all inter-connected forming a wall where the wind can only pass through the slots that direct the wind against the sails of the windmill. 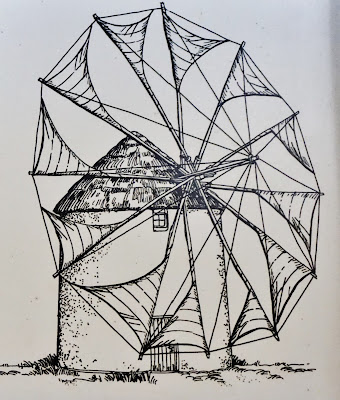 Windmills from Asia to Europe ~ the Muslin expansion of the fifth and sixth century led to the conquest of Spain in the west and Persia in the east. They think it logical that windmill knowledge was transferred to Europe during that time. Windmills in Spain were recorded by Al'-Mas Udl who lived 912-957 A.D. The period of the crusades, 1096 to 1191, must have also caused the knowledge of windmills to spread across Continental Europe and England. However, because of its poor efficiency, the vertical axis (Persia) windmill locations where there was not much wind, led to failure. It has been deduced that this failure led to the change to the horizontal shaft windmill design. When it came into being is unclear, but the Mediterranean windmill with cloth sails was known to be an early development on the Isle of Crete. These had wind wheels up to 30 feet in diameter. The first post windmill was recorded in 1137.

John Burnham, a water pump maker in Ellington, Connecticut realized the need for a mechanism to power the home/farm size water system, and approached a mechanic named Daniel Halladay to invent such a machine. Halladay had apprenticed as a machinist and in 1851 had supervised the installation of machinery at the government armory in Harpers Ferry, Virginia. Within a short time Halladay had developed a prototype to meet Burnham's requirements. After a six months test, Halladay applied for and was issued a patent on August 29, 1854. Later that hear, Halladay Wind Mill Company was organized.

This mill is the first commercially successful self-governing windmill in the U.S. This windmill is dedicated to the memory of Billy Wayne "Lefty" Christopher, one of the outstanding early collectors of old windmills. After he passed away, his wife sold his collection to the Museum for everyone to enjoy.

Jim has always looked at the windmills out in the fields and wondered how they self-regulated and he finally got his answer when we visited this museum. You see, this is a solid wheel mill with a tail (called a vane, like a weather vane) to keep the wheel facing the wind through a system of linkages and a counterweight. Facing this windmill, imagine the wind blowing from behind you. As the wind increases, there is more force on the small "side vane" on the left side of the wind wheel causing the wind wheel to turn away from the wind. As the wheel turns away from the wind, the wind is now hitting the blades of the wheel at more of a glancing, thus applying less force and causing the wheel to slow down. As the wind decreases, the counterweight, through the linkages, overcomes the wind force on the side vane and the wheel turns back to face the wind. Thus, this is a self-regulating machine, both as to speed and direction. 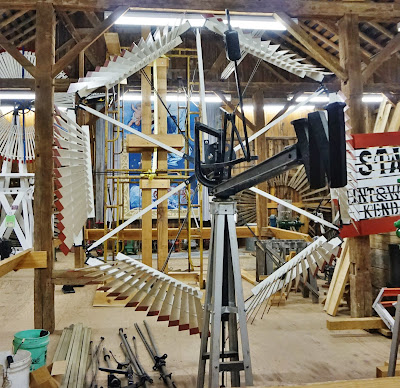 Again, imagine the wind coming from your back as you are facing the windmill. The wind wheel is on the opposite side of the tower as the direction the wind is blowing. The wind has no vane and thus is a "down wind" windmill. This windmill is made up of six sections which are pivoted on the spokes of the wheel. As the wind increases the wheel turns faster causing the sections to open. Now the wind is striking the blades at a glancing blow, thus with less force. As the force of the counterweight overcomes the centrifugal force on the sections of the wheel begins to resume a near flat position.

This small windmill was built as a garden decoration. It was built to have the appearance of the famous Fairbury No. 7, which was built from the early 1920s until 1961, when Fairbury ceased making windmills. This mill is a self-oiling, self-regulating machine, and pumps water just like a full size windmill. In 1960 it cost $74.34.


The history of the Windmill and the Railroads: 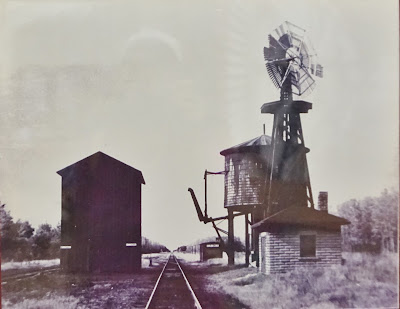 A large "Eclipse" railroad model which pumped water into the large storage tank and the spout at the left was swung down to the tender to take on water. These special windmills were built with wind mills as large as 36 feet in diameter. The special RR model version of the "American Windmill" played a vital role in the settling of the great plains and is said that their use accelerated the settlement of the Heartlands and Great Plains by one or two generations. 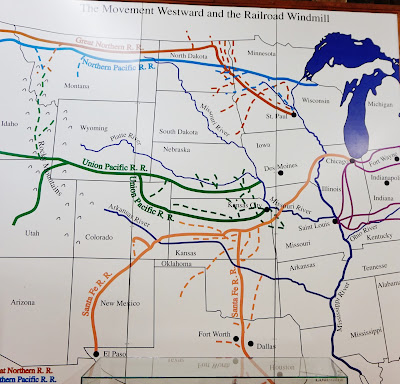 This map shows the Heartlands and the Great Plains from Chicago to the Rocky Mountains. The solid color shows the primary initial route of the four major railroads as they moved forward. As the Civil War ended, the railroads began to direct their efforts toward moving westward and their route followed major river beds as a source of water for the steam locomotive. The dashed lines are the prime secondary route over land that lacked a source of water, there the railroads used wells with large pumping windmills to furnish water for the steam locomotives.

By the early 1850s the railroad had reached as far west as Chicago, Evanston, IN, and Nashville, TN. At the outbreak of the Civil War in 1861 several railroads had reached the Mississippi River. The Civil War required all the efforts of the railroads until its end in April 1865. Within a short time after the Civil War several railroads had bridged the Mississippi and by 1867 had reached Council Bluffs, IA on the banks of the Missouri River. By 1872 the Missouri had been bridged to Omaha, NE. Moving further westward routes were determined more by water availability than distance or land topography. It was common to see a watering stop at every crossing of a river.

This is a replica of the first flour grinding windmill built in America. 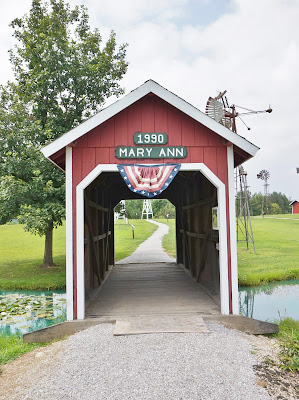 The Mary Ann Bridge was built in 1990 at the home of John A. Miller for his wife. The bridge was donated to the museum and moved here in 1999. 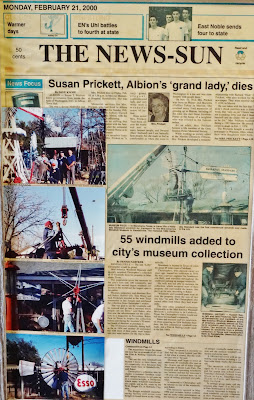 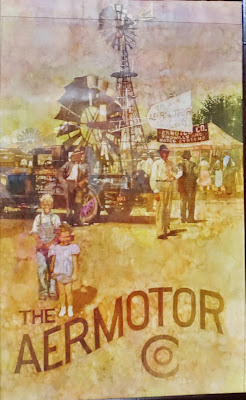