Joshua Tree National Park is a combination of the Mojave Desert and Colorado Desert. The western half of the park is the Mojave Desert with elevations above 3,000 feet.  Here are the pinyon pines, junipers, scrub oaks, Mojave yuccas, and Mojave prickly pear cacti. The Joshua Tree is abundant in the Mojave Desert.  I don't know why it is called a "tree," because it is really a species of yucca. Its waxy, spiny leaves expose little surface area, conserving moisture. 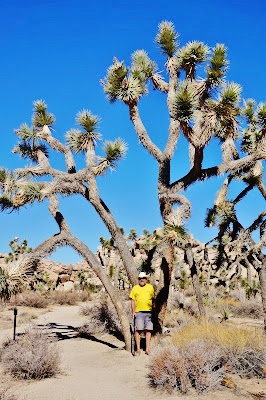 As close as we were to this National Park, I decided a drive of over 55 miles one way was something to do. Driving through the park took a while as well since I decided to take a back road and that took a little longer, ending up at Barker Dam.  We stopped at some other sights like Live Oak (but I never saw any Oak Tree), split rock, where I did get some pictures, and then along Desert Queen Mine Road. It was interesting driving through the small towns of Joshua Tree and Twentynine Palms.  They were mostly desert, dry, windy and sandy.  Not a terrain that we would want to live in.

Joshua Trees can grow over 40 feet tall, at a rate of about an inch a year.  Its clusters of cream-colored flowers bloom February to April. 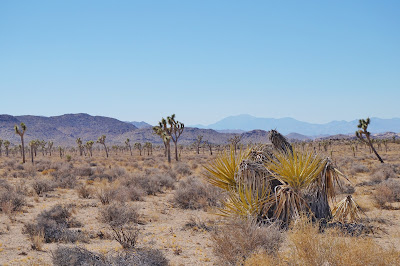 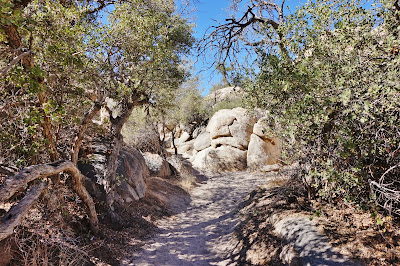 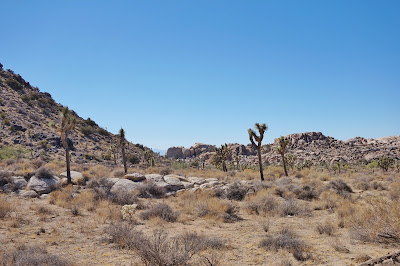 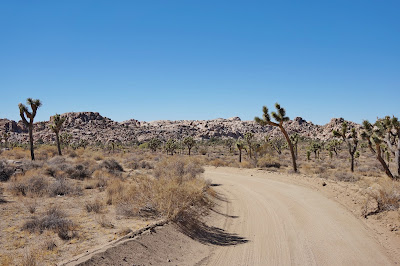 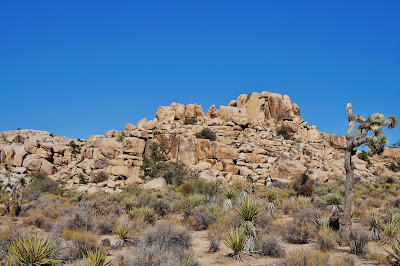 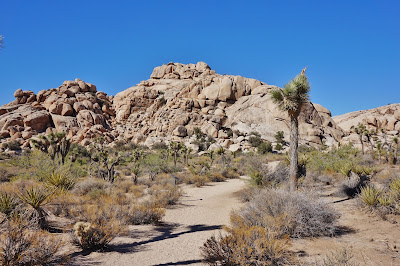 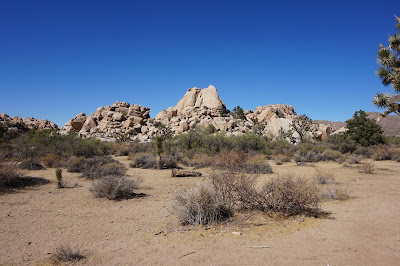 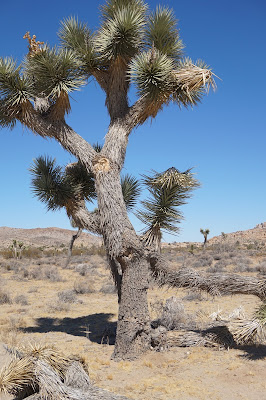 The Joshua Tree is called the "Tree of Life."  It grows primarily in the Mojave Desert.  It has adapted to reduced rainfall by spreading its roots in a dense, shallow network to collect as much surface moisture as possible. 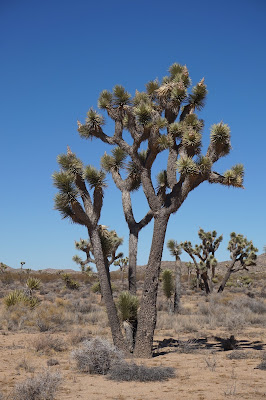 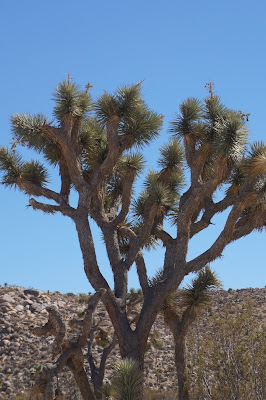 Almost every part of this plant has been or is used by other desert dwellers, people as well as animals. Chemeheuvi people wove its fibers to make baskets, sandals and mats. 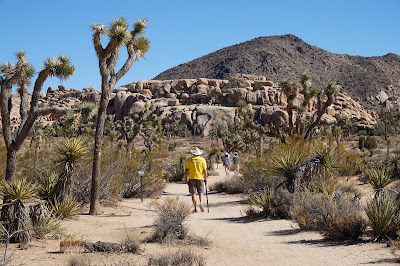 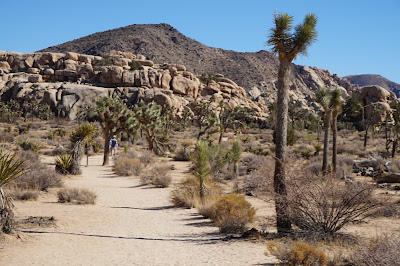 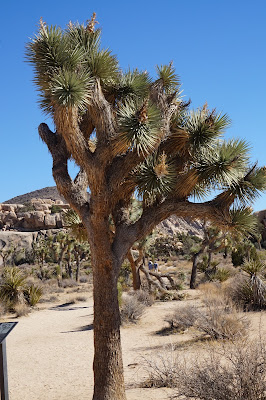 Scott's orioles can sometimes be seen near woven nests hanging beneath tree limbs. Ladder-backed woodpeckers or flickers fly in and out of holes they drill in tree trunks. 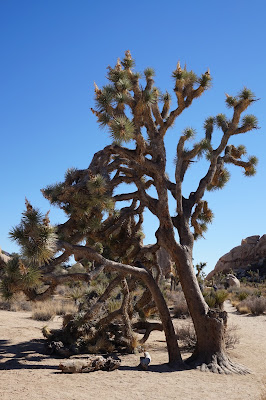 Ground squirrels, birds, and deer eat the creamy white blossoms. Later fruits and seeds provide food for antelope ground squirrels and other small animals. Even after death, a tree trunk on the ground provides a home for desert night lizards, ants, and scorpions. Eventually, termites return it to the desert enriching the sandy soil for the next Joshua Tree to sprout.

As we walked on the trails we met people from Switzerland, France, and Australia.  It is very interesting talking to them and we always welcome them to our country and wish them a good trip.

The rock formations were quite impressive. They all seem to be jumbled up, one on top of the other in the most unlikely shapes. The rock piles began underground eons ago as a result of volcanic activity. Magma, in this case a molten form of the rock called monzogranite, rose from deep within the earth. As it rose, it intruded the overlying rock, the Pinto gneiss formation.

As the granite cooled and crystalized underground, cracks (joints) formed horizontally and vertically. The granite continued to uplift where it came in contact with groundwater. Chemical weathering caused by groundwater worked on the angular granite blocks, widening cracks and rounding edges. Eventually the surface soil eroded, leaving heaps of monzogranite scattered across the land like careless piles of toy blocks. 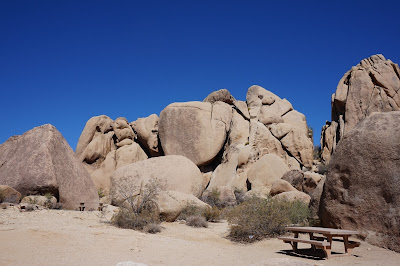 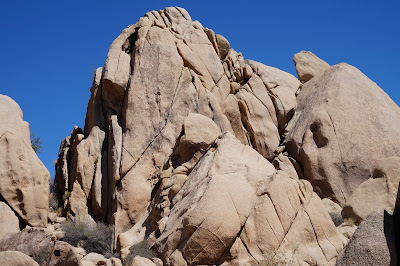 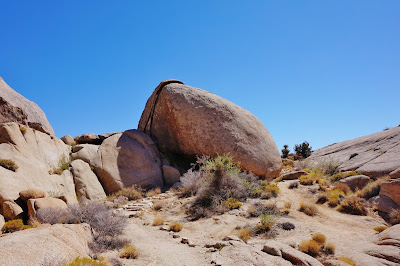 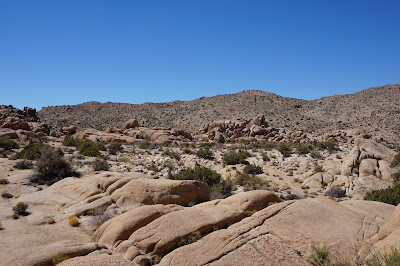 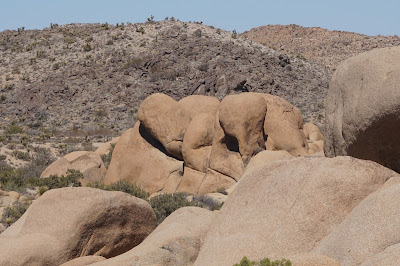 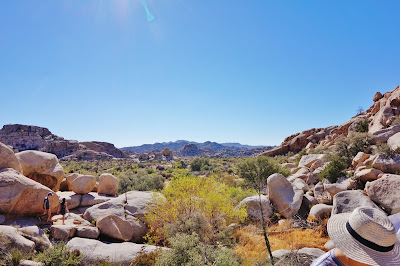