While in Las Vegas a trip to the Hoover Dam was a must see.  The Hoover Dam is located about 30 miles southeast of Las Vegas. Construction began in 1931 and was completed in 1936. At that time it was the largest concrete structure in the world. The Hoover Dam was named for President Herbert Hoover dedicated by President Roosevelt at a cost of $49 million and 112 lives. The newest addition to the canyon is the Colorado River Bridge, 900 feet above the river and a quarter of a mile from the Dam.
We did not do a tour of the Dam at this time, and will have to return for that. What we did not know was that you had to go through security (like a courthouse or airport); we had knives on us (and Jim's cane) which are not allowed in the Dam. Next time we will be better equipped.  We will also probably camp at Lake Mead since they have FHU RV sites.

For millions of years, the Colorado River carved a 1400 mile course from Colorado's Rocky Mountains to the Gulf of California. As early as 600 A.D., humans worked to harness its water for their use, and in the years of western settlement, growing populations came to rely on its waters for sustenance.

In the 1800s and 1900s, the river often flooded low-lying farmland and communities in the spring and early summer as it surged with water from melting snow. In late summer and early fall, it often dried to a trickle, too low to divert. To protect the low-lying lands from flooding, and to assure a stable, year-round water supply, the river needed to be controlled.

But before the river could be managed, its waters had to be equitably divided among the seven states it serves. In 1922, a representative from each state and the Federal Government met for this purpose and created the Colorado River Compact. Signed in November 1922, this agreement divided the Colorado River Basin into an upper and a lower half, and gave half of the river's annual estimated flow to each basin.
The Compact paved the way for the construction of several storage dams and delivery facilities on the Colorado River and, in 1928, Congress passed the Boulder Canyon Project Act, authorizing construction of Hoover Dam.
The water storage and river control provided by the Hoover Dam and downstream projects enable residents of the southwest to use the waters of the lower river for many purposes: Irrigation of more than one million acres of some of America's richest crop lands and nearly half a million acres in Mexico; meeting the domestic water needs of more than 20 million people in Las Vegas, Los Angeles, San Diego, Phoenix, Tucson, and other southwestern cities, towns, and Indian communities in Arizona, Nevada, and California; generation of low-cost hydroelectric power for use in Nevada, Arizona, and California; recreation of the lakes and controlled flows created by Hoover Dam and other dams on the lower Colorado River today. Several wildlife refuges and backwaters have been developed along the lower river to replace habitat lost with construction of the dams. 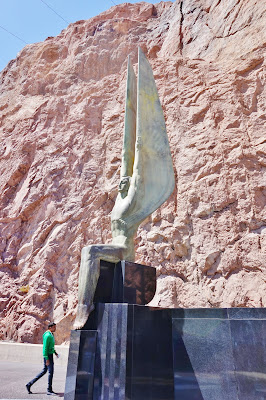 Oskar J.W. Hanen created the Winged Figures of the Republic. He believed that the orientation of many ancient buildings included messages from their builders to people of the future. He designed the art on Monument Plaza with that in mind. 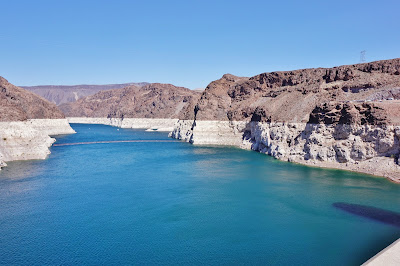 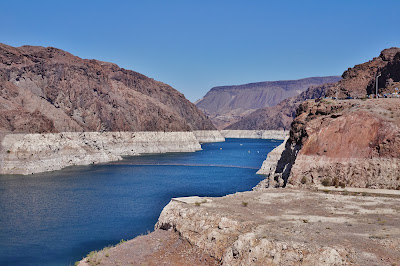 See the white line in the above two pictures? That is where the water line used to be before the drought that has been plaguing the area. More pictures of Lake Mead are below, which is also very low.
When Lake Mead is full, water flows through this spillway around the dam. The water travels through one of the massive tunnels that were built to divert the Colorado River prior to construction of the dam, and is released back into the river downstream. Each of the two spillways can handle the flow of Niagara Falls. The only time the spillway has been needed was in 1983.
After we toured Hoover Dam, we drove over to Lake Mead and sat there for lunch. 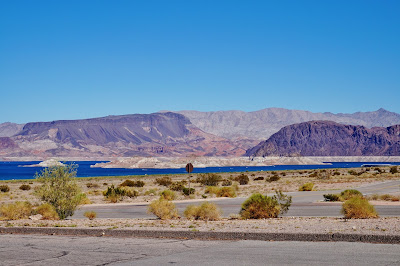 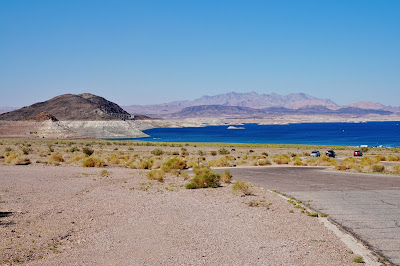 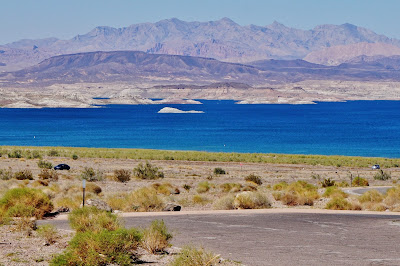 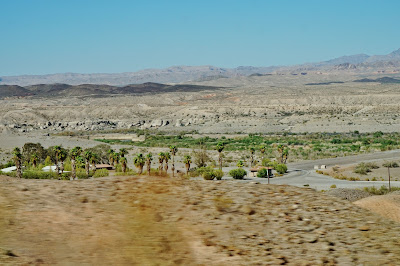 Lake Mead is the largest man-made lake in the United States. When full, it contains enough water to cover the entire state of Pennsylvania to a depth of one foot. Between 1998 and 2015, prolonged drought caused the lake level to drop 150 feet.