Things have not been going very well at work - the things that have been going on are too numerous to mention here - they are a story of themselves and will take a few pages and I just do not have the gumption to go into it now.  We get along great with all our co-workers and the assistant managers, but the "Managers" are too much and no one working there likes them.  We have been told things will change, but so far it has not.  We were going to resign, but were asked to stay until Bob got there and we were going to, but then family issues came up. 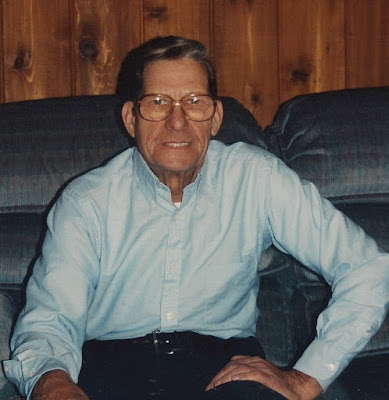 Gayle's Dad was in a nursing home and then developed pneumonia and ended up in the hospital - all at the same time all this other stuff was happening.  Tuesday we got a call that he was not doing well and may not last much longer.  At 94 years old he has lived a good life but we knew we had to go to Ohio to see him - if he lasts that long.  We started packing up Tuesday and I told all the bosses what was happening and we left Wednesday.

Gayle's brother Bill called in the morning and said that they were all at the hospital, Dad could not talk and was on morphine.  He wanted everyone to talk to Dad and let him know how we felt and to say goodbye.  Even Jacklyn and Josh called and talked to him a little bit, which made me feel real good that they were able to talk to him. Jacklyn had been in contact with Cindy and then I called Josh and had him call in.

We are currently in Texarkana, Texas; Thursday we will travel to Denmark, Tn; then Louisville, Ky; with our final stop in Ohio.

We arrived in Ohio on Saturday afternoon, June 14 and got settled into our campsite at Country Acres campground in Ravenna.  We then went to Dad's house and went with Bill, Cindy & Pat to see Dad at the hospice in Westlake, where he was moved earlier that week.  Even though we had called and talked to him and said it's okay to go, he was still with us on Saturday.  Everyone kept saying that he was waiting for me to arrive.  We got to the hospice around 6:30pm and I held Dad's hand and talked to him for about three hours, along with everyone else.  Kimberly was already there and Mike & Diane arrived later.  Before they got there, we all held hands and said a prayer for Dad.  He was very unresponsive - eyes were open and staring into space; mouth open and tongue hanging out and his breathing very erratic.  He had been shutting down for about a week before that as he had been taken off of food and water, according to his wishes.  He did not look like Elmer (Dad) any more.

Here is Dad as we remember him:

This is a picture of Pat & Dad at Josh's house shortly after Ellie was born. He was eating Cheetos so his mouth is a bit orange.

Around 9 we all left; got to his house about 9:30pm, visited with Bill & Cindy for a while and then Jim & I took off for the trailer. About 10:30pm we got a call from Bill saying that Dad has passed on.

Tuesday night was the viewing and a lot of my cousins came as well as the only remaining brother - Uncle Rich, who is in a wheelchair.  He just lost one of his brothers last month (May) and now he lost another brother.  He is the last remaining Balach brother and cried a lot.

Wednesday morning was the funeral service.  We met at the funeral home to pay our last respects, then went to the church for a service.  Dad is being cremated so there was no trip to the cemetery.  We all went to Catered Elegance for lunch and talk.  Here is the prayer card from the service. 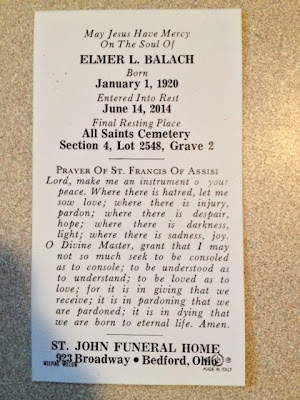 From there we went to Dad's house for a while.  Jacklyn & Joe were getting ready to drive back to Atlanta and Josh changed his flight back to Houston to Wednesday afternoon. Pat came by and visited for a while as well.

We did get to go visit with Emma Katula for a little while, and were very glad we did. While we were there Karen called to talk with her mom and I chatted with her for a bit.  Emma will miss Dad a lot as they were very good friends, knowing each other for over 60 years.  Mom & Dad lived across the street from Emma & George Katula and I grew up with their children.  We all have known each other a very, very long time.

The finality of Dad's life is on Saturday when he will be buried next to Mom.  Then we will have to deal with the house and decide what to do with all the stuff there.  I guess we will get together and make some decisions.

Here is a picture of my Mom & Dad: 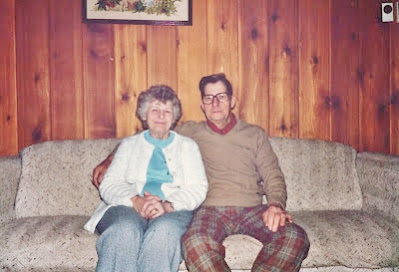 My Mom died when I was pregnant with Jacklyn - back in July of 1988.