During World War II thousands of British pilots learned to fly at six civilian training schools in the United States. The first of these schools was in Terrell, Texas. After the United States entered the war, American Aviation Cadets also trained at the school. Approximately 2,200 Royal Air Force and American Army Air Force cadets trained at Terrell and around 1,470 graduated between 1941 and 1945. 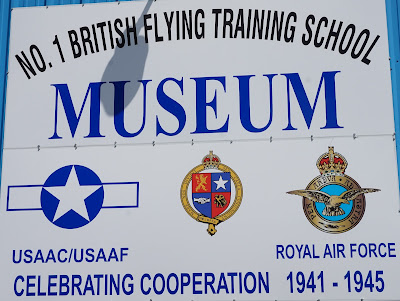 British graduates went on to fly in every theater in which the RAF fought. Many never lived to see the end of the war; twenty who died during flight training are buried in local Oakland Memorial Cemetery. Terrell's citizens welcomed the students pilots to their community and many life-long bonds were forged. 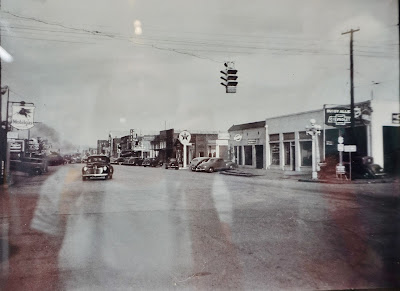 Most of the early British students had never been in an airplane or even driven an automobile before arriving in Texas to learn to fly. The cadets trained in the air on aerobatics, instrument flight, and night flying, while on the ground they studied navigation, meteorology, engines and armaments - even spending time in early flight simulators.

Secret negotiations between President Franklin D. Roosevelt and British Prime Minister Winston Churchill, the Lend-Lease Act was proposed in late 1940 and passed in 1941. The Lend-Lease Act was the principal means for providing U.S. military aid to allied foreign nations during WWII. One section of the Lend-Lease Act provided for training British pilots and aircrew in the United States. Shortly after the Lend-Lease Act was signed a meeting was held between Air Commodore George Pirie, the air attache and member of the British purchasing commission in Washington, DC and Maj. General Henry H. "Hap" Arnold, the United States assistant chief of staff and Army Air Corps chief. General Arnold said, "As soon as the Lend-Lease Bill is active we are going to offer you up to 260 Stearmans and Fairchilds and up to 285 Harvards or Yales on loan for training purposes. I understand these aircraft are to be used in the U.S. within the six of our best civilian schools. The school operators are prepared to co-operate with you on this scheme."

The six schools were:

No. 1 Terrell, Texas
No. 2 Lancaster, California
No. 3 Miami, Oklahoma
No. 4 Mesa, Arizona
No. 5 Clewiston, Florida
No. 6 Ponca City, Oklahoma
No. 7 Sweetwater, Texas 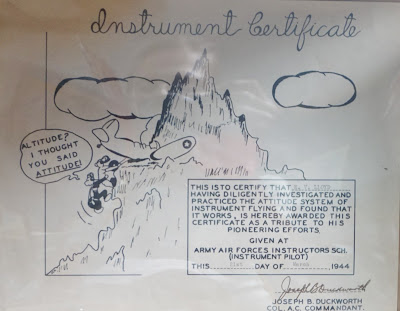 Named for its inventor, Arthur G.W. Aldis, the Aldis lamp is a visual signal device for optical communication typically using Morse Code. In the case of a radio failure or aircraft not equipped with a radio, or in the case of a deaf pilot, air traffic control may use a signal lamp to direct the aircraft. The signal lamp has a focused bright beam and is capable of emitting three different colors: red, white and green. These colors may be flashed or steady, and have different meanings to aircraft in flight or on the ground. Planes can acknowledge the instruction by rocking their wings, moving the ailerons if on the ground, or by flashing their landing or navigation lights during hours of darkness. 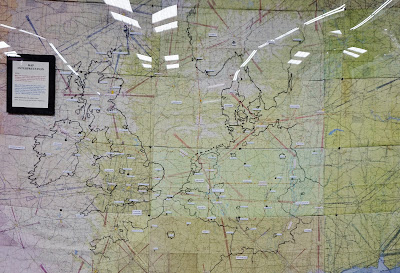 Look closely at this map and the outlined black images that are the European and Asian countries interposed over the United States. It shows how big the U.S. is in relation to the other countries. It's pretty amazing. 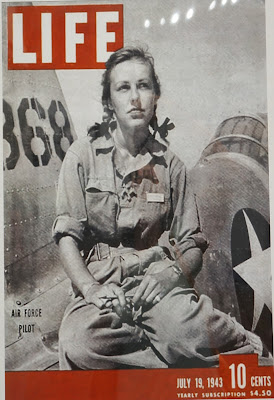 The primary B-17 used for bomber training WASP's was the famous "Pistol Packin' Mamas." (They are carrying their own parachutes.) 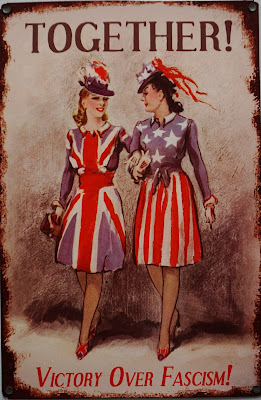 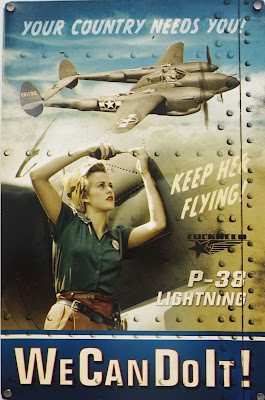 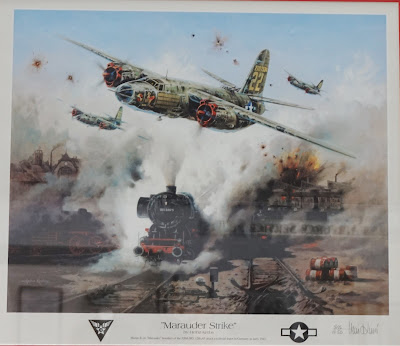 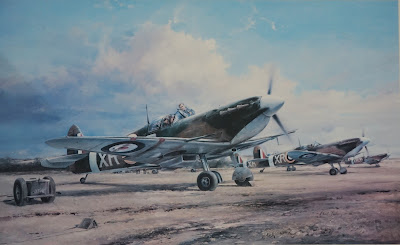 Early Squadron Scramble commemorating the intrepid 240 American air men who volunteered to fly with the RAF in their early struggle against the Luftwaffe before the U.S. joined the war.

After conducting a night parachute assault into the French region of Normandy, soldiers of the 505th Parachute Infantry Regiment reached their objective, the French town of Ste. Mere Eglise. Small bands of paratroopers linked up under a dark French night and made their way to the town. As more paratroopers began to arrive, the leaders planned a hasty defense of the first liberated town in all of occupied Europe from the German counterattack that was sure to come.

In the town, the beautiful chapel for which the town is named stands boldly in the morning light. The parachute of Pvt John M. Steele is still caught on the bell tower, where he was captured when his plane accidentally dropped troopers in the town. Abandoned German equipment from the unit formally garrisoned in the town was left behind as the Germans fled from the paratroopers who appeared like ghosts across the countryside. A few German prisoners sit stone-faced, stunned by the rapid change in the fortunes of war. Where as yesterday they were occupiers, now they are prisoners. On June 6, 1944, the 505th PIR truly seized the day.

Also instrumental in WWII were the Indian Code Talkers. The phrase "code talker" was developed during WWII and was associated with the Navajo Tribe through the use of the Navajo language to "confuse" the Japanese translation efforts to interpret our military communications. However, the "Code Talker" story began much earlier than WWI. 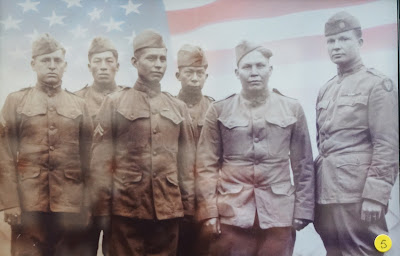 In the later part of WWI, which began in 1914, the German military force was over powering the Allied Forces during WWI the warring in France involved the terrible trench warfare. The Germans were successfully interpreting and breaking the Allied Forces' military communications and countering every attempt to follow "over the top" trench orders for Allied military forces to advance. The Germans were breaking every code that General Pershing and the French were attempting to use.

In October 1918, Captain Lawrence heard two Choctaw Indians, Solomon Lewis and Michell Bobb, carrying out a conversation in their native tongue. Within 24 hours, the concept of using the Choctaw language for strategic Allied battlefront communications was developed. A total of 19 Choctaw soldiers were trained to use a version of the Choctaw language modified to include military terms that were not part of their native tongue.

The use of the Choctaw language for American Expeditionary forces communication completely fooled the Germans. Over the next 72 hours, that success became the master stroke that the Allied forces needed during the Meuse-Argonne Offensive and the breaking of the German Hindenburg line. The German forces were defeated and WWI ended on November 11, 1918.

In 2008, President George W. Bush signed the Code Talkers Recognition Act. Later in 2013, a special gold medallion was given to every Indian tribe that could document its code talking history in both WWI and WWII. The gold medals are now all housed now in the Smithsonian Museum in Washington, DC. Additionally, each code talker that served was given a replica of the gold special medallion made in silver.

The Chapel was constructed in the Museum as a tribute to the British cadets who died during training. 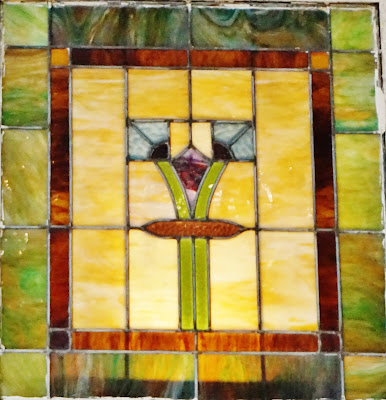 The stained glass window above the Chapel came from the First United Methodist Church of Carmen, Oklahoma. It has survived great destruction over the years and now looks over the fallen heroes of WWII. The Chapel windows located on each side of the stained glass window, were originally installed in the Parker Grove Elementary School in Ravenna, Texas, around the 1920s. After the school closed it was converted to a Church, which also eventually closed. The building was going to be demolished but through the efforts of a Dallas resident, the windows were salvaged and eventually donated them to the Museum. 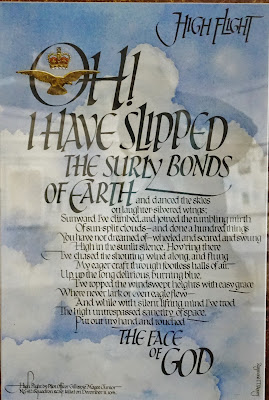 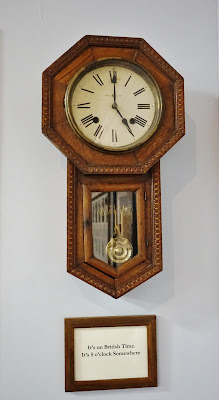 The painting commemorates the 50th Anniversary of the Allied Victory in WWII. The theme centers on the Statute of Liberty and what she stands for to the World. She is framed by the "V for Victory" symbol. The painting is a chronology of the war, starting with Britain and France's Declaration of War against Germany on September 4, 1939. The major campaigns are shown: European action on the right; the Pacific War on the left; all culminating in the newspaper headline announcing Peace on August 14, 1945, the day Japan accepted Allied terms for ending the war.

Quote for the day: "Today the guns are silent, a great tragedy has ended. A great victory has been won, the skies no longer rain death ~ the seas bear only commerce ~ men everywhere walk upright in the sunlight. The entire world is quietly at peace." ~~ General Douglas MacArthur