The National Bird Dog Museum highlights more than 40 breeds of dogs and people dating back to the 1930s. The retrieving dog breed has a rich history originating from a variety of environments and backgrounds providing an exciting dimension to the sport dog history. The museum is dedicated to the preservation and perpetuation of bird dog, field trial, and hunting traditions. The museum houses the art, pictures, and memorabilia about field trials, shooting sports.

The museum is filled with pictures and photographs of so many dogs and people. I went there to find out about bird dogs, and I found it quite fascinating. I really did not know what to expect since I am not familiar with bird dogs or what their actual function is. Some just show the handler where the birds are and some actually flush out the birds so they can be shot.

These dogs are beautiful and magnificent. They know what their purpose is and take pride in achieving that goal. The pictures show them posing and they seem to take pride in how they look. The first known recording of the national championship was in 1896 to Count Gladstone IV, a black, white & tan setter.

This painting was completed in 1946 by Edwin Megargee, who was an illustrator for many outdoor publications of his day, including Field & Stream and Country Life. The painting captures the beauty and spirit of the early Setter breed that dominated the field trial circuit at the turn of the 20th century. 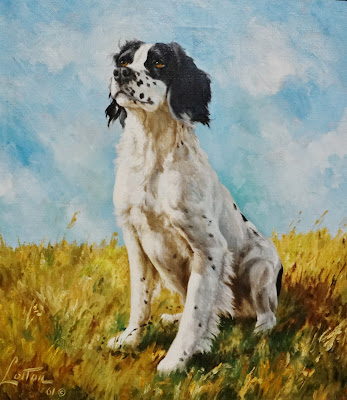 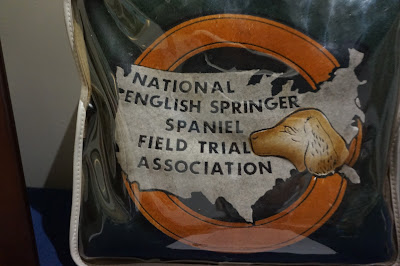 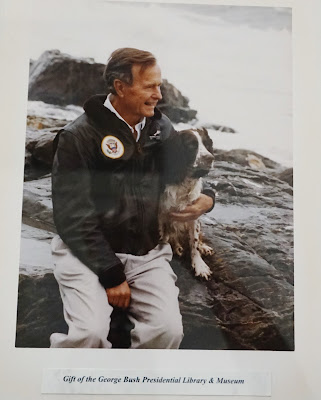 George Bush's Millie, named after a family friend from Houston, was their English springer spaniel.


What is a field trial? It is a competitive event at which sporting dogs compete against one another. Among the various sporting breeds, the most prevalent events are field trials for retrievers, pointing dogs and flushing dogs. Field trails are usually organized by kennel clubs, breed associations or other gun dog organizations. Field trials are generally considered more competitive than hunt tests in that success at a field trial requires a higher level of training than success at a hunt test requires. For example, in Retriever Hunt Trials, dogs retrieve over longer distances with a more complex path than a Retriever Hunt Test would generally provide. There are trials for puppies, young dogs, and older experienced dogs.

The term "field trial" mean different things to different breed organizations. Spaniel field trials demand that dogs compete against one another, whereas Retriever field trials are more similar to hunt tests among other breeds. Field trials come in various grades including Open, Amateur, Sanctioned and non-sanctioned. An Open Field trial permits entry from any handler or trainer while a an Amateur trial only permits non-professional handlers/trainers. Sanctioned trials are ones that are held under the control of a national kennel club or organization, while the non-sanctioned can be organized by a local club.

Count Nobel was a $10,000 setter dog, born of blue English blood. He was born in 1879. He was brought to America in 1881 and has long been famous for his feats in field trials and his prize winnings at bench shows. He was as brave as a lion, gentle as a lamb, and understood the English language thoroughly. In 1880 Count Noble won the national amateur derby, competing with some of the most famous dogs in the world. He died suddenly on January 21, 1891.

The Bobwhite quail is the bird which is hunted by dogs competing in the National Field Trial Championship at the Ames Plantation in Grand Junction.

This painting of Barshoe Culprit was awarded after he won the 85th running of the American Field Quail Futurity in 1989. It was presented to Judge Lee R. West, the breeder, owner and handler of Barshoe Culprit, and hung in Judge West's chambers in the United States Courthouse in Oklahoma City. On April 19, 1995, the Alfred P. Murrah building was bombed by Timothy McVeigh, killing 169 people. It was the deadliest terrorist attack in U.S. History prior to the twin towers collapse on September 11, 2001.

As a result of the massive explosion, the painting, as well as much of Judge West's chambers, was severely damaged by shards of glass from the Murrah Building, located directly across the street.

Judge West donated the painting to the Field Trial Hall of Fame Museum in its damaged condition because of the historical significance of such damage. 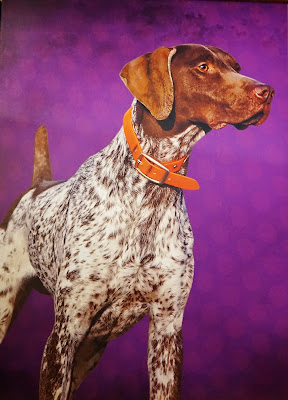 This is a beautiful picture of a German Short-Haired Pointer. I don't know his name, but I love the picture.

My grand-dog, Maverick, was a German Short-Haired Pointer, and used to come and visit us in Stone Mountain. We would get to dog sit for him when his mom and dad went out of town, which was so much fun. Maverick would stand for hours at our back window staring at the birds flocking around the bird feeder. Instinctively, he knew he was supposed to do something with birds but couldn't quite figure it out as he had no training to show him. He was a great dog, and we had a wonderful time when we were able to dog-sit our "grand-dogs."

Transporting dogs long distances around the turn of the 20th century was almost exclusively done by using the railway system. These beautiful crates were considered to be top of the line crates in those days. They were manufactured in two sizes from the late 1800s to the early 1900s. One of the features of these crates was the ability to feed and water the dog without having to remove them from the crates during the transport. This crate was discovered in the back of a farmer's hay barn where they had been stored for many years.

The museum was amazing and filled with pictures of the various breeds of field dogs, handlers and owners. As you can see from these pictures, there were more than I could even begin to highlight. 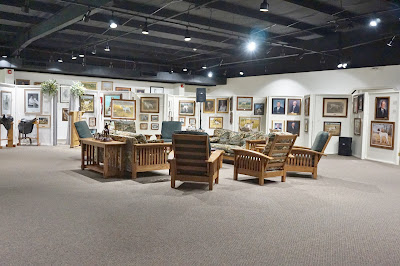 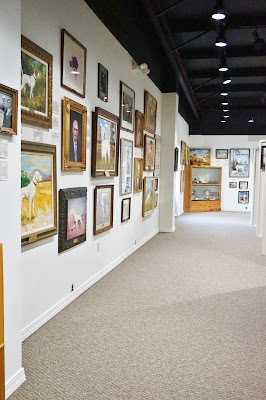 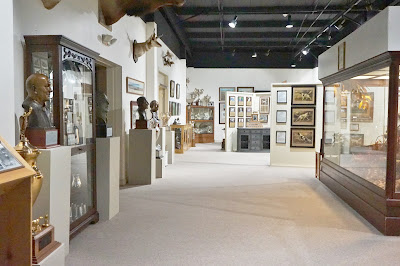 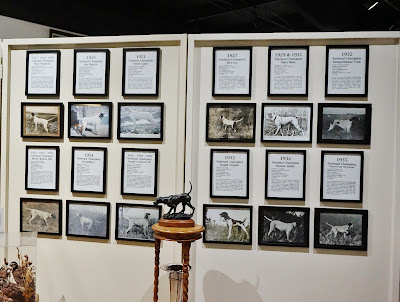 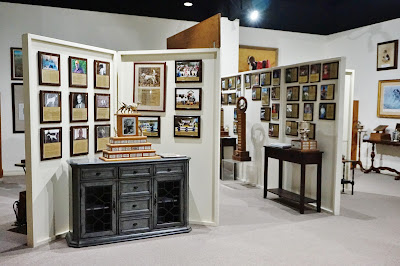 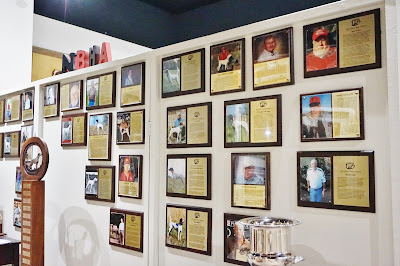 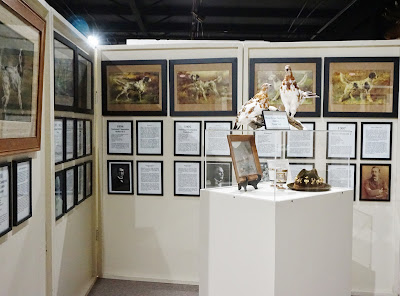 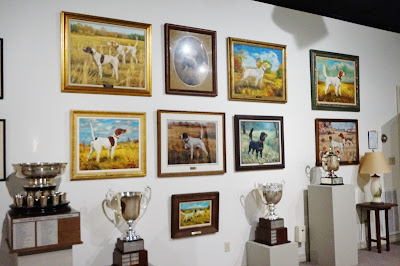 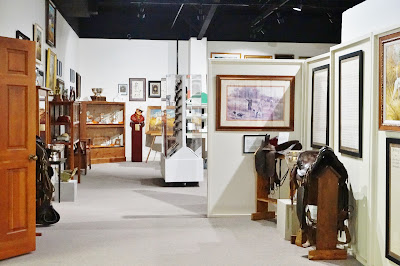 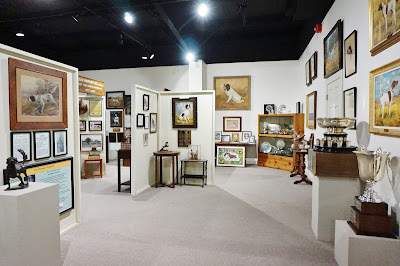 The unsung heroes of field dog trials are the horses. All eyes and thoughts are on the dogs, but they are part of a team -- a team which includes the handler, and in horseback stakes, the horse he or she rides. The horse is a vital part of many field trials. It would be virtually impossible for handlers, judges, reporters, and marshals to cover most trials afoot. Even when most handlers walk, mounted judges are often a necessity if they are going to see what is going on. It takes a very special animal to meet a field trialer's needs. Peaceful coexistence between equines and canines is contrary to their evolutionary history. Horses are herd animals from the great plains of the world. Dogs are descended from prey species which at one time were probably quite fond of horse meat. To expect these two to work together is a real test of our roles as trusted master of both. Not only do they end up working for the same human, the best of them becomes a team. 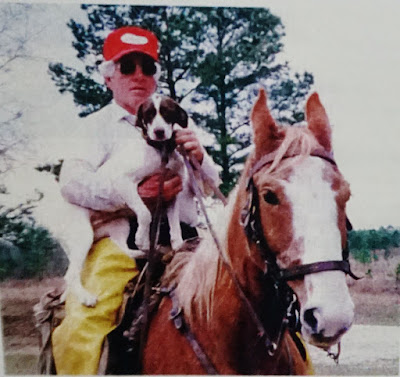 A "dog" horse is versatile. Field trial courses can present obstacles that an average horse might refuse to negotiate. There are ditches, streams, windfalls, briars, and mud in inclement weather. Then there are the mechanics that are associated with the handling routine. The horse must "ground-tie," and remain where it's left during the rider's absence. The horse must "pony" willingly, trailer well, and accept gunfire. A field trial horse must totally accept the dogs (even to carry one across its saddle) and to offer no threat or harm to them in any way. They must stand quietly when asked, and move swiftly when urged. These are but a few of the situations that can and do arise at every trial, and a good "dog" horse quietly adapts and accepts each new experience.

Like dogs, intelligence is a must with a trial horse. A smart horse adapts to the field trial game rather quickly, bonds with the dogs it follows, and responds readily to its rider. The intelligent horse isn't startled easily, and remains calm throughout the commotion that's part of every field trial. 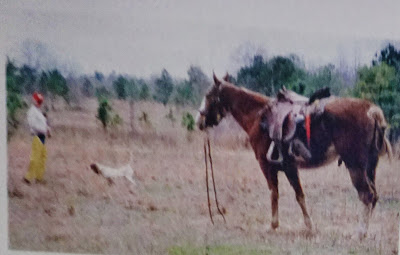 Stamina is next in importance. The stress of travel, coupled with long days afield, over rough terrain, soon takes a toll on any horse. A dog is expected to to run once in a stake, but a horse may ride several over a number of days. Field trial horsemanship is a science, and the individual who's a consistent contender is as adept with a horse as with the dogs. Experienced handlers know that winning usually hinges, not only on the dog, but on their own ability, and a helping hand from their horse.

Quote for the day: "It's natural canine behavior to chew on all sorts of things, roll in other animals' droppings, hump and fight other dogs, menace anything that invades the home. All these behaviors can be curbed, but that takes a lot of work. Trainers say it requires nearly 2,000 repetitions of a behavior for a dog to completely absorb it." ~~ Jon Katz