We went to the Civil War Museum and then the Court House in Appomattox, Virginia, which is where General Robert E. Lee surrendered his Army of Northern Virginia to General Ulysses S. Grant, general-in-chief of all United States forces on April 9, 1865. Lee's surrender signaled the end of the Southern States' attempt to create a separate nation. The seven southern slave states began its secession in December 1860 in order to form the Confederate States of America. The government and northern states refused to recognize the secession, and because of uncompromising differences between the free and slave states over the power of the government to prohibit slavery in the territories that had not yet become states, eventually led to the civil war.


We also stopped at a confederate cemetery and stood on the road that Lee took on his way to the Court House.

Also at this site was a confederate cemetery where local residents had gathered on April 9, 1915, to honor the dead. 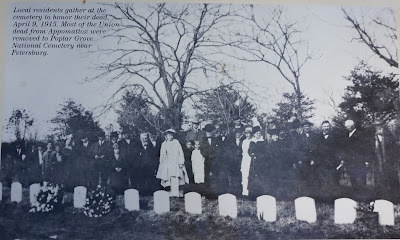 There are only 19 men buried here (out of 100) who were killed during the last two days of war. The identities of just seven of the dead are known. Of these, all had been in the Confederate Army at least three years. Only one person enlisted just three days after the firing on Fort Sumter. He survived 1,454 days of service, only to be killed during the war's last 24 hours. There is one Union soldier buried here.

The American Civil War lasted from 1861 to 1865. While many still debate the ultimate causes of the Civil War, Pulitzer Prize-winning author James McPherson writes that, "The Civil War started because of uncompromising differences between the free and slave states over the power of the national government to prohibit slavery in the territories that had not yet become states. When Abraham Lincoln won election in 1860 as the first Republican president on a platform pledging to keep slavery out of the territories, seven slave states in the deep South seceded and formed a new nation, the Confederate States of America. (See map below.) The incoming Lincoln administration and most of the Northern people refused to recognize the legitimacy of secession. They feared that it would discredit democracy and create a fatal precedent that would eventually fragment the no-longer United States into several small, squabbling countries."

This map shows the confederate states, border states, slave states and free states that formed after Lincoln became President in 1860. 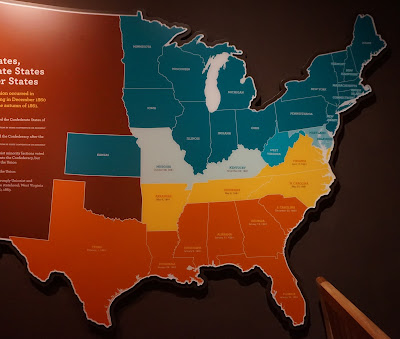 Secession from the Union occurred during several waves beginning in December 1860 and continuing through the autumn of 1861. The Orange states (South Carolina south through Texas) seceded and formed the Confederate States of American in February 1861. The Yellow states (Virginia, North Carolina, Tennessee and Arkansas) are those that seceded and joined the Confederacy after the beginning of the war. The Light Blue states (Missouri, Kentucky) were border states whose secessionist minority factions voted to secede and were accepted into the Confederacy, but which remained effectively in the Union. The Mid-Blue states (Maryland, Delaware) were slave states that stayed in the Union. Western Virginia remained strongly Unionist and initiated steps toward separate statehood. The Dark Blue states were free states.

American slavery generated enormous wealth. The system that enslaved 4 million African Americans affected the lives of virtually all Southerners and many Northerners. Households with slaves varied from large plantations with dozens or hundreds of workers to the smaller farms of Appomattox County with only a few slaves. And, although three out of four of the South's white families owned no slaves, they overwhelmingly believed that slavery preserved civil order and guaranteed their superior position in society. Slavery created a community of interest among whites who benefited from slavery and had economic, social, and political reasons to fear its destruction.


The woman in this picture is probably the slave Bella Jenkins whom Mary Sessions sold to Samuel Pope in 1854. She was sold again within the Pope family in 1864. No matter how well or how cruelly they were treated, slaves were human property, liable to be sold and separated from their families to turn a profit, to settle a debt, to satisfy the terms of a will, or to enforce discipline.


Based on data from the 1860 census, the areas of the South with the highest concentration of slave population were the areas where the white population was the wealthiest. Those areas also proved to be where support of secession was the strongest. Wealth was concentrated in the hands of white planters in the cotton, rice, and sugar growing South and in New England, where textile mills turned slave-grown cotton into finished cloth.

Blacks served in both armies. In Lee's army they worked as cooks, musicians, teamsters, and personal servants. Thirty-nine received paroles. Grant's army had seven black regiments, about 5,000 men, including Cpl. John Peck, USCT (United States Colored Troops), who participated in the Battle of Appomattox Court House during the final hours.

By 1865, civilian life throughout the South lay in ruins. The Federal blockade of shipping cut off imported supplies and halted cash income from exports. Homemade items replaced factory goods. Customers at Meeks' store in Appomattox bartered for what they could get. As Federal armies approached, civilian life disintegrated. Enslaved workers fled to freedom. Letters describe confusion, privation, suffering, destitution. Raw emotions jump off the written page vowing vengeance to the "Yankee Demons" who "burnt the town" and "pillaged and robbed almost every house."

As Lee and Grant fought their war, General William T. Sherman moved through Georgia, the Carolinas, and eventually to Virginia. More than a dozen battles resulted in the capture of Atlanta and a boost in both Federal morale and Abraham Lincoln's re-election prospects. Sherman's army then began its "march to the sea," followed by a punishing march through South Carolina, the state that first seceded. Campaigns in the Shenandoah Valley and Sherman's march to the sea not only attacked soldiers but also penetrated into the Confederate heartland. The Federals ruined crops, burned barns and mills, and liberated the enslaved people that provided the South with farm laborers, cooks, craftsman and house servants. Southerns who had supported secession in 1861 had feared "subjugation" by the North. By 1864, war had made subjugation real.

Ultimately, Grant's strategy was to press Lee from the rear while preventing him from turning south, get the cavalry in front of him, and then surround and compel him to fight or surrender. Lee kept retreating and headed for Appomattox Station where he thought he could get much needed supplies. But the Union had captured the Station and the supplies and positioned itself between Lee and his next objective. The Federal infantry closed in behind Lee, and General John B. Gordon led an attack, when the cavalrymen cut through the Federal counterparts and escaped, but then large numbers of Union infantry arrived in support. Gordon reported to Lee that it was no use. Flags of truce broke out, the shooting stopped and that afternoon, the war in Virginia came to an end.


On April 12, 1865, within sight of the Appomattox Court House, the Army of Northern Virginia furled its flag one last time. 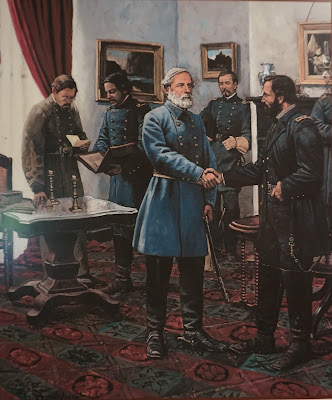 Some ex-Confederates could not accept life in a reunified United States. An estimated 10,000 former Confederate officials, officers, soldiers and their families chose exile in England, Canada, Mexico or Central and South America. A few of the most ardent secessionists, including Florida governor John Milton and Edmund Ruffin, "the man who fired the first shot of the Civil War," committed suicide.


Other former Confederate veterans decided after a few years to leave the South and seek opportunities elsewhere: South America, Egypt, the American West, or northern cities. Many freed slaves also decided that the postwar South was not where they wanted to begin new lives, especially as promises of Federal protection or assistance failed to materialize and white Southerners regained "home rule." Individually and in small groups, pioneering African Americans sought new opportunities in the West, in the North, or abroad. This limited movement anticipated the "Great Migration" of the early 20th century.

The sectional divide that existed before Appomattox not only continued after the soldiers blended back into civilian life, but resurfaced in violent ways. Secession from the Union had failed and four million enslaved people were freed, but otherwise the results of the war were still to be determined. Between 1865 and 1870, the United States ratified three constitutional amendments intended to assure civil and political rights for African Americans, but white Southerners were not resigned to racial equality. More than a decade of "Reconstruction" and army occupation yielded to a period of "Redemption" that rolled back change, often violently.

The experience of the war itself opened wounds that never healed entirely, despite apparent "reunification" of South and North in the 20th century.


Much of the nation embraced a Confederate perspective on the Civil War, renouncing Reconstruction as depicted in "Birth of a Nation" and romanticizing the South depicted in "Gone with the Wind." Proposals to commemorate the great event at Appomattox revealed that the passage of time has not healed the scars of civil war.

In the half century after Appomattox reconstruction gave way to an often violent white Southern reaction that ushered in decades of "Jim Crow" segregation. Confederate and Federal veterans took cautious steps toward reconciliation and both sides paid their respects to Lee and Grant. Many white Southerners remained proudly "unreconstructed" and black Southerners paid homage to Appomattox as a place associated with freedom. 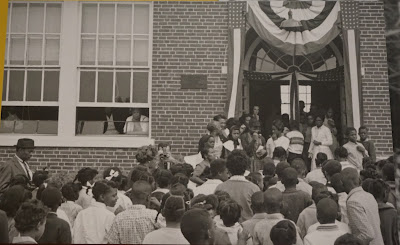 Since the middle of the 20th century Appomattox Court House has been reborn as a place that commemorates an honorable end to a bloody civil war. A movement ~ with roots in the Appomattox region ~ to end racial discrimination plunged the nation into a period of civil strife even as it observed the centennial of the Civil War. The Civil Rights movement brought the nation closer to fulfilling its ideals, but the 150th Anniversary of Appomattox still finds Americans confronting questions about racial justice and vigorously debating the powers of the Federal government. 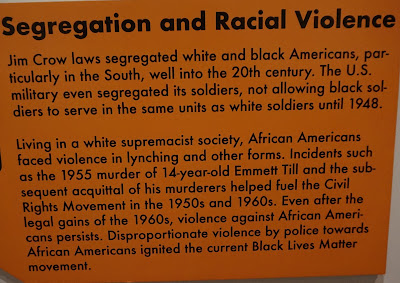 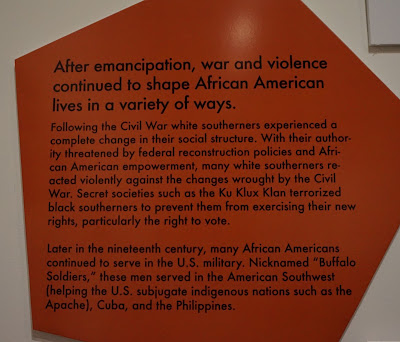 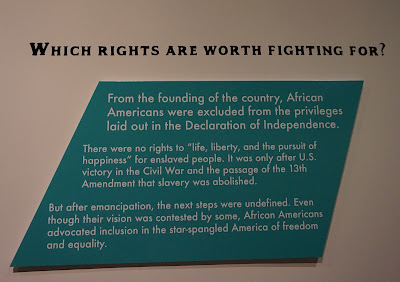 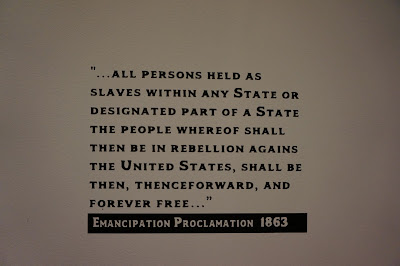 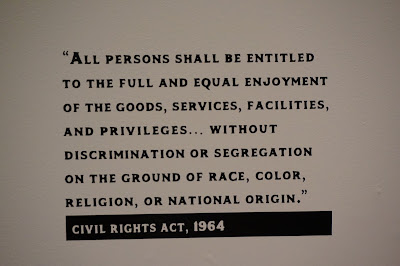 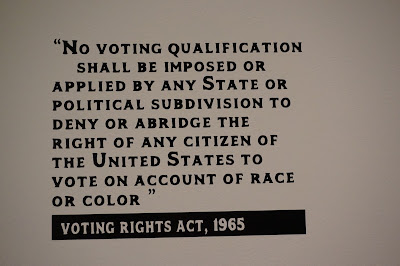 Quote for the Day: "Abraham Lincoln is singular. Abraham Lincoln, before he was killed, stood up and, you know, for the first time from any sitting president, stood for the right for suffrage for African-American men who had served in the Civil War. And that's a limited suffrage, but it was quite radical at the time."
~~ Ta-Nehisi Coates