As I look for things to see in the towns we visit, this one caught my eye. The Museum of Dolls, Toys & Miniatures is housed in an old ABC Liquor Store, so it's not very big, but crammed full with more boxes coming. People from all over the country find they cannot throw away their old heirlooms and look for places to send them. Many of these dolls and toys are donated, and some of the Barbie Dolls belonged to Amy Dawn Morris, daughter of the owner, who died at the young age of 21 from Wiarnig-Hoffman bone disease. She was an avid doll collector and left hundreds of Barbies and other dolls to her sister and their mother, which are now at this museum. 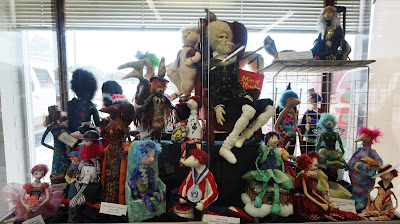 So, what is a doll? Dolls are usually thought of as three-dimensional human images made for children. There are dolls that come from graves in Peru, Italy, Greece, and Egypt. The first dolls were made of stone, wood, clay, leather or cloth. They may have been used more as religious objects, but some have been found buried with children. Germany, known for making wooden toys, mass produced the first wooden dolls for export in the early 1800s. Toy fairs were held with the commercial buyers coming from many countries. By the 1850s, doll heads were made of papier mache pressed in a mold. Some were dipped in wax. Bodies were constructed from wood, cloth, and/or leather.

Porcelain was introduced from China and doll heads, hands, and feet began to be made of bisque and china, with the bodies still made of cloth, leather and wood. France and Germany competed to see who could make most beautiful dolls. Manufacturers won awards for their dolls at world expositions. Doll makers tried many mediums, using celluloid, tin, and rubber. Rubber dolls could "drink" and "wet."

During WWII hundreds of doll companies opened in the U.S.A. Exports from Europe stopped because factories now made war supplies and shipping was halted as ships were sunk. Dolls were now primarily made of composition, a mixture of ground wood or paper combined with glue. After the war imports resumed, including cheap imports from Japan. The Depression came and many U.S. doll manufacturers closed. WWII stopped German imports and the U.S. companies now took over the doll industries.

Dolls were made of composition, followed by hard plastic in the 1940s and then vinyl in the 1950s. Dolls are usually classified by the material used to manufacture their heads. Bodies are not taken into consideration. For example, bisque head dolls may have bodies made of bisque, leather, cloth, wood, or composition. Dolls today are made of many materials and have become more than just toys as adults collect them for their beauty. 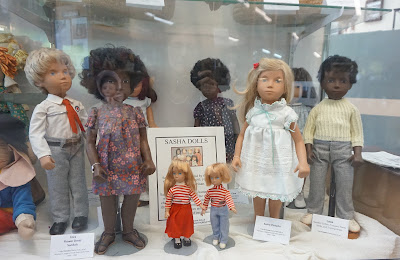 Sasha dolls were created by the late Sasha Morgenthaler, a Swiss artist and artisan. 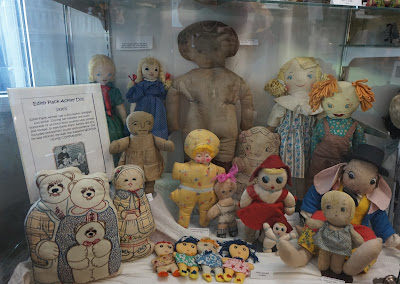 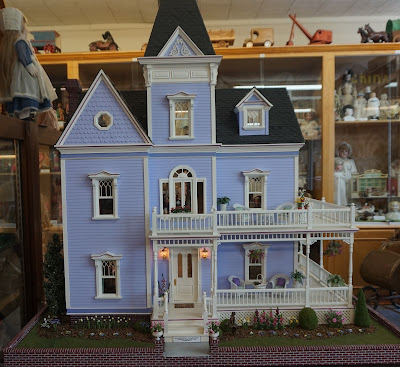 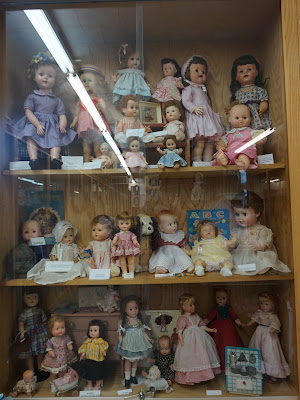 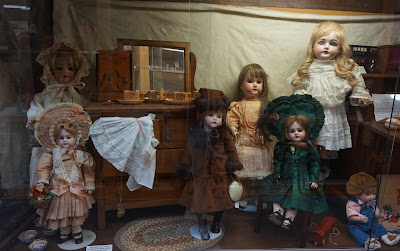 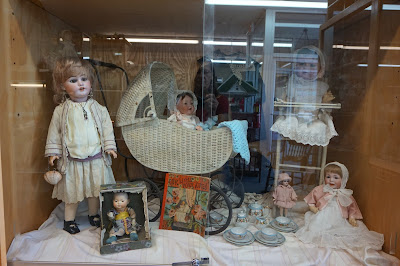 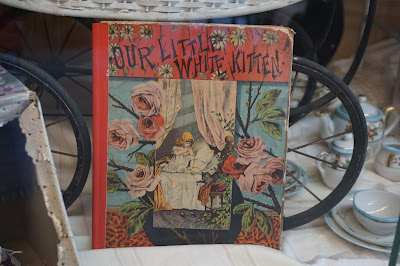 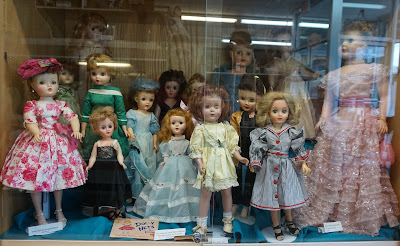 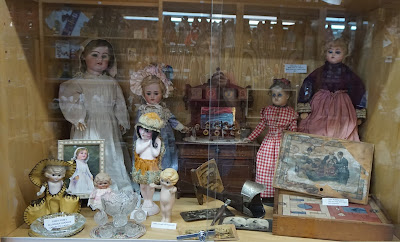 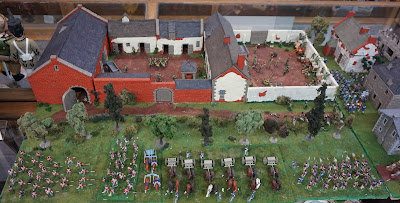 The Battle of Waterloo was a one day battle on June 18, 1815 near Waterloo in today's present day Belgium, then part of the United Kingdom of the Netherlands. 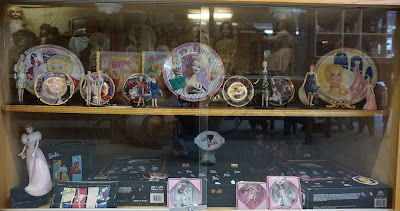 The following come from a collection of Barbie Dolls with costume creations by Bob Mackie, designer to Hollywood stars. 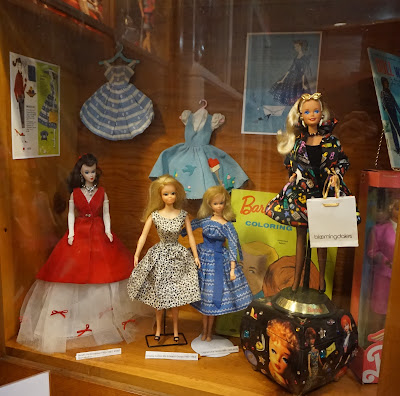 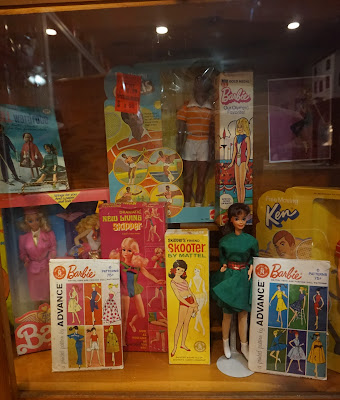 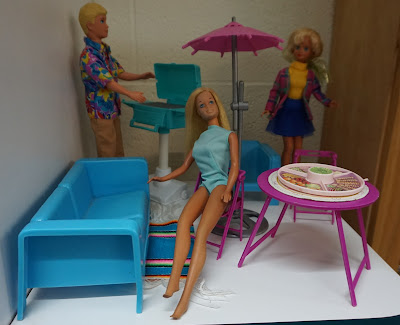 I found some interesting facts about Barbie: Did you know that her full name is Barbie Millicent Roberts? (I did not even know she had a last name!) She was named after the daughter of her creator, and was inspired by a German fashion doll named Bild Lilli. Another fact of Barbie is her birthday - do you know what that is? Well, I did not. It's March 9, 1959, and her birthplace is Willows, Wisconsin. Besides her little sister Skipper, Barbie also has cousins named Todd, Stacie, Kelly, Krissy, and Francie.

That ends the Barbie creations. Now, here are the rest of the dolls and toys in the museum. 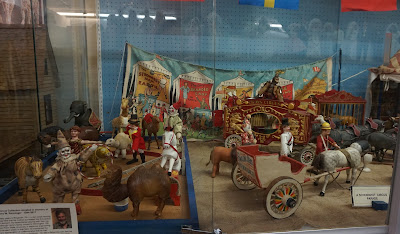 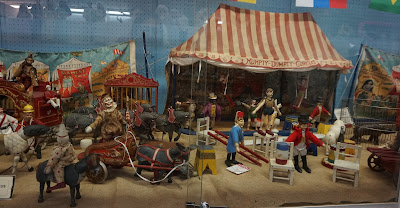 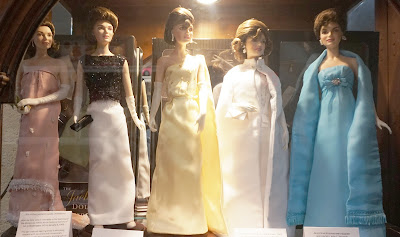 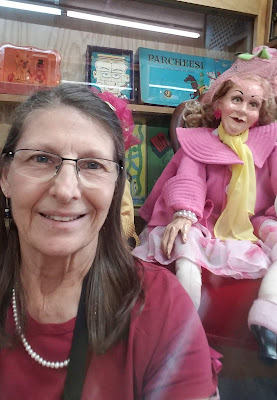 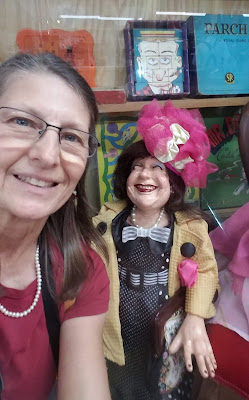 This carriage is a replica of the one George Washington used in 1789. It is one of six replicas designed as gifts for the children of the famous toy maker, Albert Schoenhut. Schoenhut also created the circus figurines shown in above pictures.

Quote for the Day: "Dolls fire our collective imagination, for better and - too often - for worse. From life-size dolls the same height as the little girls who carry them, to dolls whose long hair can 'grow' longer, to Barbie and her fashionable sisters, dolls do double duty as child's play and the focus of adult art and adult fear." ~ Ellen Datlow