Have you ever heard of the Hunley? A lot of people have not, but the Hunley became the world's first successful combat submarine when it sank the USS Housatonic on February 17, 1864. The Hunley was a part of the Confederate States of America that played a small part in the American Civil War.

The Hunley, lying just beneath the surface, had a long metal spar coming out of the bow with a torpedo attached to it.

The Hunley rammed the spar into the side of the Housatonic, igniting an approximate 135-pound torpedo in the sloop's side, which blew a hole 10-feet wide. The ship sank in less than five minutes. The Housatonic lost 5 of its 160 crewmen. 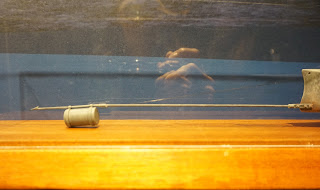 Once the torpedo had detonated on the Housatonic, the Hunley signaled to shore that she had completed her mission and was on the way home. Confederates on shore lit a fire to help guide the Hunley back to land, but instead, the Hunley disappeared into the sea. We may never know exactly what took place on that fateful night, but over the course of the last 150 years there have been plenty of theories. As you tour the museum, there are four theories as to what happened to the Hunley, and you are able to vote as to what you think happened by placing a coin in the respective box. 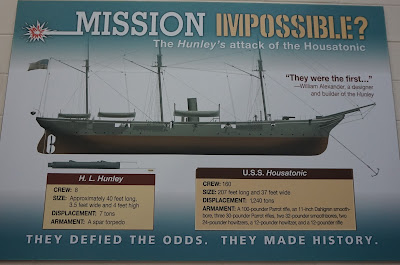 The Hunley was finally located on May 3, 1995 by Clive Cussler, New York Times best-selling author. Cussler has been interested in maritime history and founded the National Underwater and Marine Agency (NUMA), an organization that searches for some of history's most famous shipwrecks. Cussler and NUMA spent over a decade searching for the legendary submarine. The Hunley was located off the coast of Charleston in 30 feet of water. 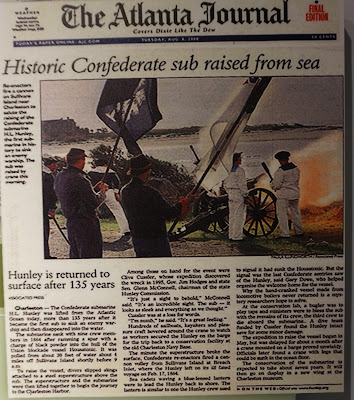 It then took five years of planning to excavate the Hunley. Excavation began on January 21, 2001, and on August 8, 2000, the world watched as the Hunley was finally brought up. 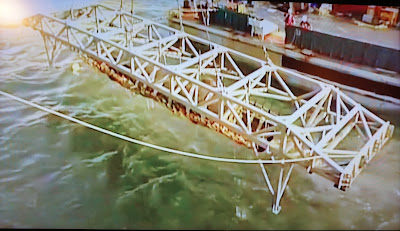 Since the Hunley was sitting in salt water for so many years, it could not be left in the open air, so in order to preserve the Hunley, it is immersed in a chemical treatment except for the times it is being worked on. Material that has been submerged for a long time will deteriorate rapidly once exposed to air unless properly stabilized. Tours are only on Saturday and Sunday so the team is able to work on the submarine during the week. 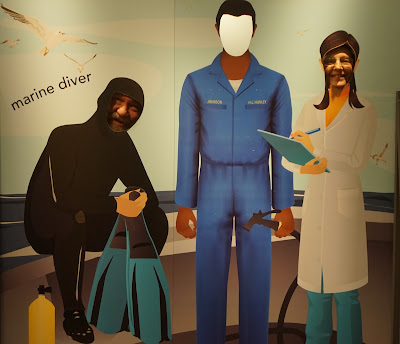 Two major players in the bringing up and restoration of the Hunley are the Marine Diver and the Conservator. We know what the diver did, but what does a Conservator do? The goal of the conservator is to protect underwater artifacts so they can be preserved for future generations and studied by archaeologists and other researchers. 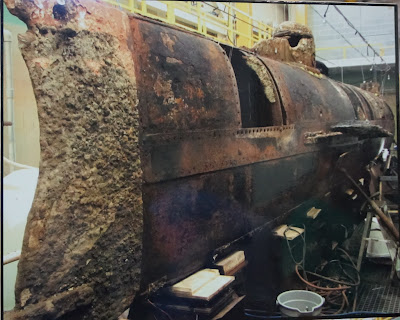 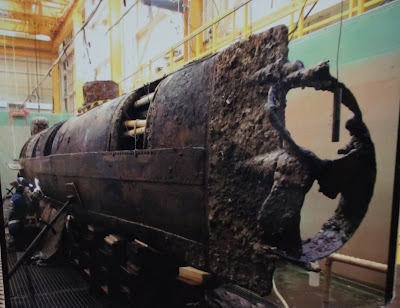 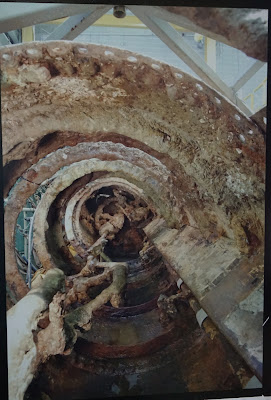 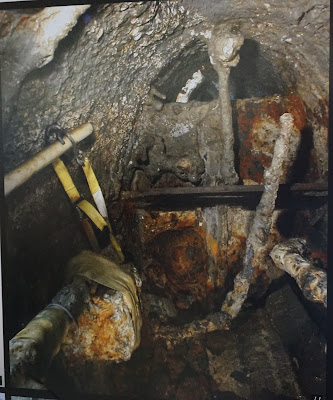 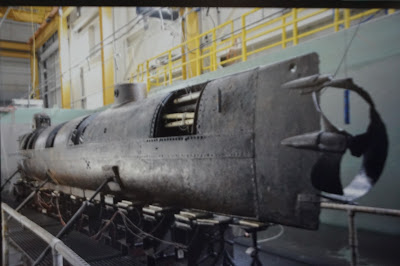 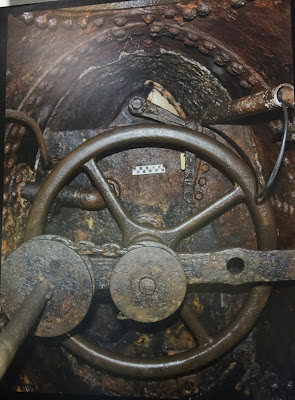 Hunley submerged in its bath water: 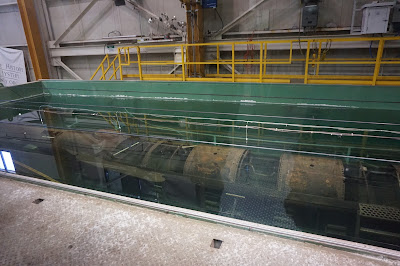 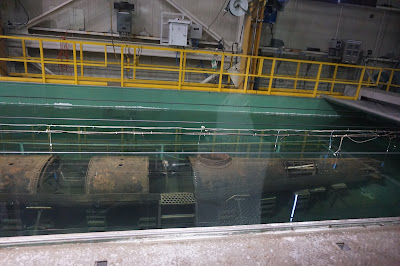 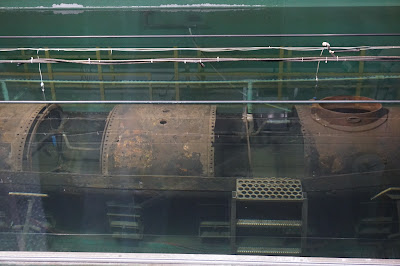 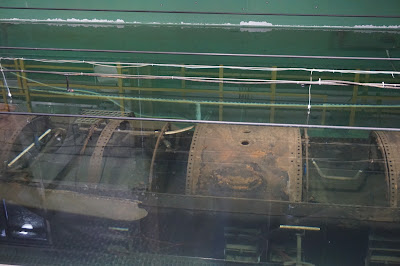 During the excavation of the Hunley, a gold coin minted in 1860 was lying on Dixon's hip bone. It was warped from the impact of a bullet, and traces of lead were discovered on the coin. One side of the $20 gold piece bears the image of Lady Liberty, and the other side, depicting the symbol of a federal shield-and-eagle, had been partially sanded and inscribed with the following words:

The forensic scientists who examined the remains of Dixon confirmed that his femur had been injured near his hip. X-rays also revealed radio-dense particles imbedded in his bone that could be traces of lead from the mini-ball. All evidence confirms that the legendary gold coin preserved Dixon's life. 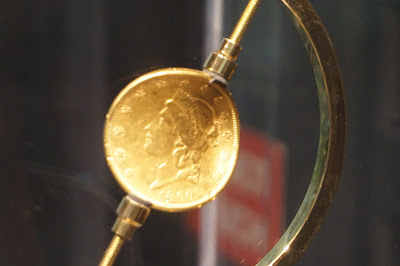 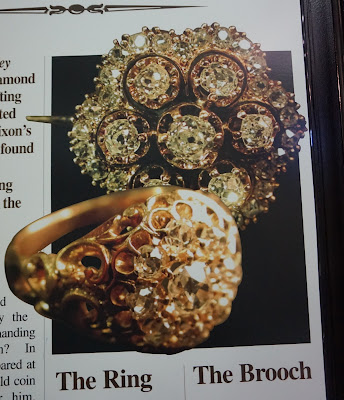 The bodies of the last crew of the Hunley were removed and given a militiary burial on April 17, 2004. They were honored with a 4.5 mile procession through downtown Charleston, ending at Magnolia Cemetery. There, the eight-man crew was then laid to rest next to the others who lost their lives on Hunley test missions. 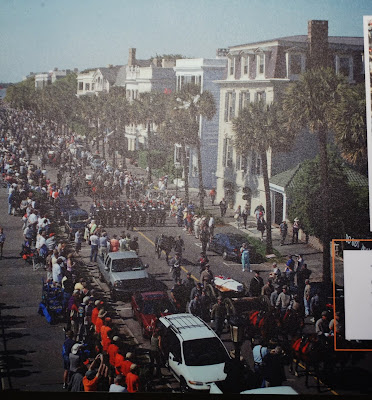 The burial was attended by tens of thousands of people who came to honor the crew and witness this historic moment. Visitors came from around the world, including Australia, Germany, France and Great Britain. 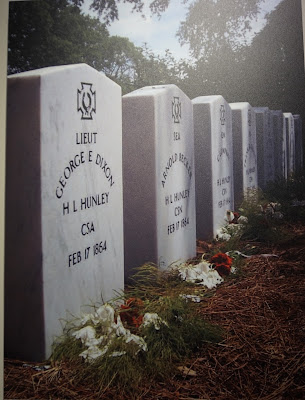 January 23, 2021. We are now at Styx River Resort until February 2. We will have a couple of stops before reaching Orlando Thousand Trails.