The Sante Fe Trail runs from Lincoln, Missouri, through Kansas into New Mexico, ending in Santa Fe, New Mexico. It linked routes originally followed by American Indians and Frontiersmen, developing into the most important trade conduit in the United States. The trail played a critical role in the westward expansion of the United States as well as trade relations with Mexico. 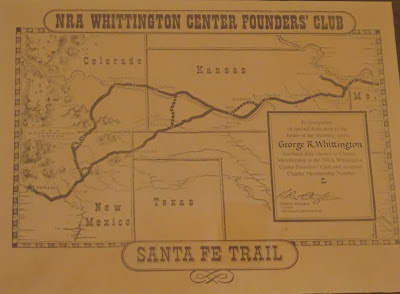 The Cimarron Cutoff followed a water-less short-cut in Kansas which ran along the Cimarron River ultimately passing east of this community and joining the trail in Fort Union or La Junta. The Santa Fe Railroad completed its line through Raton Pass in 1878, and by 1880 freighting along the Santa Fe Trail was no longer economical.

Mexico's independence from Spain in 1821 removed trade barriers that opened the southwest to trade with the United States. In 1822 William Becknell pioneered the Cimarron portion of the Santa Fe Trail. The mountain branch over Raton Pass was opened in the 1840's. The Mountain Branch crosses through the NRA Whittington Center. 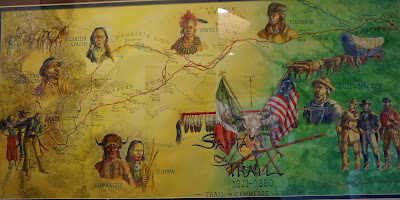 Charlton Heston posed as the "Scout" providing everlasting vigilance over the Santa Fe Trail and sacrifices made along the way. 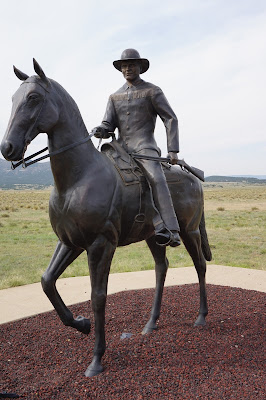 Intrepid entrepreneurs like William Becknell, Father of the Santa Fe Trail, brought trade goods from the east to the region and with the wagon trains came hunters, explorers, and mountain men such as Jedediah Smith, Kit Carson, and Manuel Lisa. Armed with full and half-stocked rifles made in St. Louis by the Hawken Brothers, most of these explorers continued to rely on the tried and true arms of ignition of flint and steel. With the increased availability of trade goods, percussion cap systems firearms began to come into their own.

The Old Spanish Trail (Santa Fe to Los Angeles) when linked to the Santa Fe Trail (Franklin, Missouri to Santa Fe, New Mexico) offered the cross continental settler 2,000 miles of unguarded and unsecured territory open to attacks and raids of natives at any time. Firearms were not only essential for hunting and sustenance, but they became an integral item for self-defense. Texas claimed the territory when it won its independence from Mexico in 1836, but it was unable to exert much control. In 1846 US General Stephen Kearney arrived in New Mexico and established it as a territory of the United States at the end of the Mexican-American war in 1848. As a result of the Treaty of Guadalupe Hidalgo which ended the war with Mexico, most of New Mexico was ceded to the United States and formally became a territory on September 9, 1850. 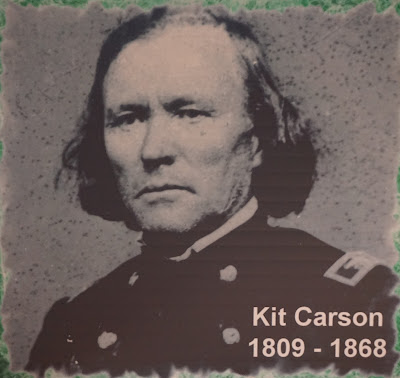 The historic American cowboy arose from the vaquero traditions of northern Mexico. Traditionally cowboys performed a multitude of ranch related tasks including tending horses, working cattle, mending fences and driving herds to market or the rail yards. With the end of the American Civil War in 1865, many veterans from both armies migrated West to escape the memories of war and in hopes of finding better economic opportunities. The early cowboys came from all walks of life, races and nationalities. As the western migration of settlers increased so did the size of grazing lands and the need of more cowboys. The tradition of the American cowboy is alive and well today in the American southwest.