The geology of southern Utah and northern Arizona covers an area from the Grand Canyon to Bryce Canyon and includes the million acre Grand Staircase-Escalante National Monument. We drove into the southern part of the National Monument and headed to the Paria Mountains.  There is also an entrance just east of Bryce. 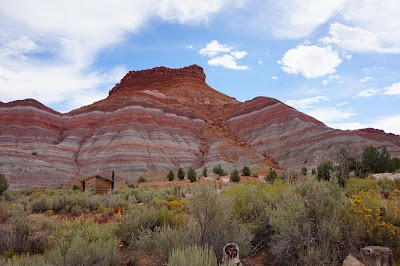 Grand Staircase was established by Presidential Proclamation (Clinton) in 1996 when it became the Bureau of Land Management's first national monument. Its vast and austere landscape embraces a spectacular array of scientific and historic resources. This high, rugged, and remote region, where bold plateaus and multi-hued cliffs run for distances that defy human perspective. Even today, this unspoiled natural area remains a frontier, a quality that greatly enhances the Monument's value for scientific study. 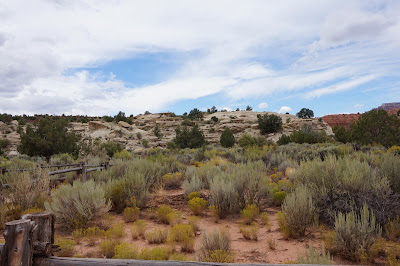 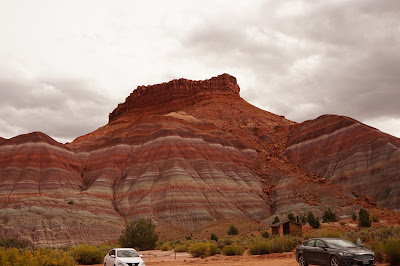 There was a movie set down a 5 mile dirt road that we drove down. But, we could not get to the set as the road was washed out and a Ranger who stopped by said that vandals burned the set down a few years ago. The movie The Outlaw Jose Wales is that last movie that was filmed at the town site, and the mountains seen here were in the movie.

Spanning 1.9 million acres, it is a fantastic outdoor laboratory offering scientists insight into what sustains, maintains, and explains our world ... and beyond. Scientists from around the world in many different fields of study have made great strides in understanding everything from the specialized relationship between bees and native desert plants to how NASA detects water on Mars.

What scientists are learning, they are sharing. Research on the Monument has produced a wealth of scientific publications, broadcasts, articles, symposiums, events, and programs. Expanding on these accomplishments, the Monument, along with its partners are promoting a variety of educational and public outreach options. These include award-winning exhibits at their four visitor centers, acclaimed lectures and field seminars, curriculum-based environmental education, Junior Ranger programs, traveling science exhibits, and much more. 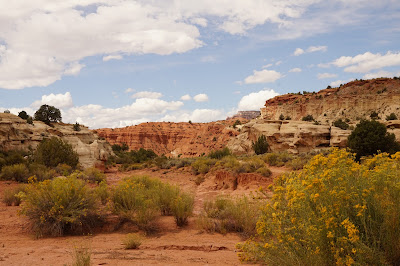 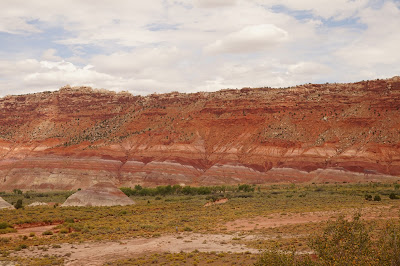 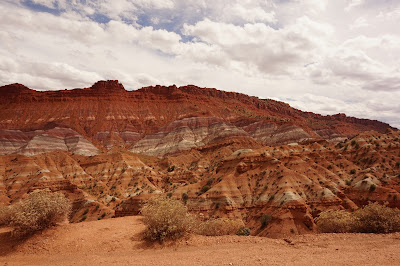 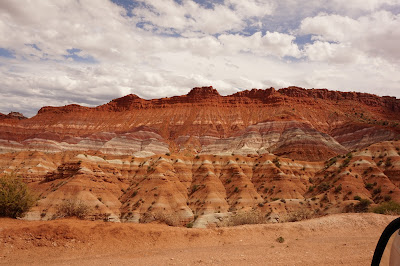 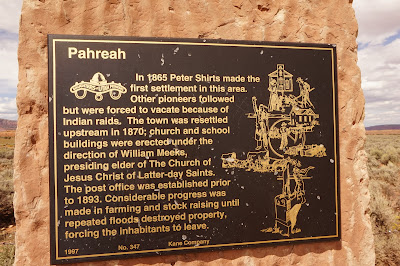 People settled in the town of Pahreah and within 10 years, the town of Pahreah had grown to 47 families, including about 20 Paiutes. Croplands and herds grew along with the town. People worked together to clear and irrigate fields, herd cattle and sheep, and weather sickness and storms. In contrast to the desperate lone gunman glorified by movies, the true heroes of the West were families, neighbors with a little extra to share, women who learned to be midwives, and cowboys who rounded up everyone's livestock.

People have lived in the Paria valley since 4000 b.c. Early hunter-gatherers used the river as a travel corridor. Puebloan groups farmed in the area, and most recently, the Southern Paiute inhabited the area. European explorers, travelers, and trappers wandered this country, and later pioneers settled here. The pioneers came to the Paria for the same reasons as Native Americans: a relatively easy travel route, a reliable water source, and fertile land that supported crops and forage for grazing animals. 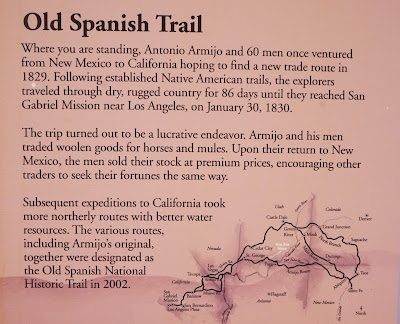 At just 25-years old, Antonio Armijo was recognized as a successful trader after his expedition of 1829-1830. Hoping to capitalize on his success, Antonio talked his parents into returning with him from New Mexico to California in 1831. He married Dolores Engracia Duarte y Peralta, the daughter of an influential California rancher. Utilizing his new family connections, Antonio and his father obtained a 13,000 acre land grant for a ranch near Napa in 1840. As a wealthy landowner, Antonio was awarded the title of Don, establishing himself as a true Californio until his death in 1851.