The town of Tombstone, Arizona is famous in history. This is where Wyatt, Virgil and Wyatt Earp with help from Doc Holliday, had a shoot out with Billy Clanton, and Tom and Frank McLaury.  This is the infamous "shoot out at the O.K. Corral." We always hear about the gun fight taking place at the O.K. Corral, but in reality the gun fight took place in the middle of town, even though people still spread the legend of it being in the corral. 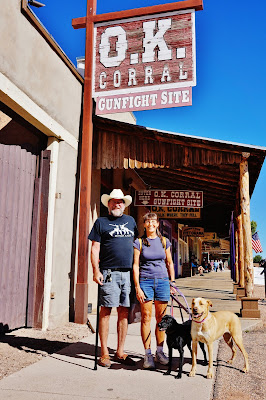 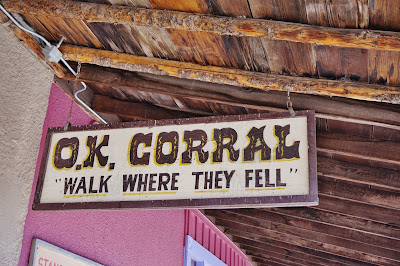 Tombstone is known as "The Town Too Tough to Die." It was founded in 1877 by a prospector named Ed Schieffelin.  Ed was staying at what was then called Camp Huachuca (wa-chu-ka) as part of a scouting expedition against the Chiricahua (chir-i-cow-uh) Apaches.  During his time there he would venture out into the wilderness "looking for rocks", all the while ignoring the warnings he received from the soldiers at the camp. They would tell him, "Ed, the only stone you will find out there will be your tombstone".  Well, Ed did find his stone.  And it was Silver.  So, remembering the words of warning from the soldiers, he named his first mine The Tombstone. 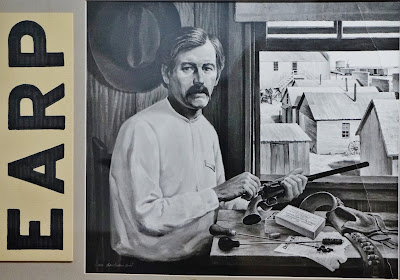 Wyatt Earp was born in Monmouth, Illinois on March 19, 1848, he traveled and lived as far west as California before coming to Tombstone in 1879. While in Tombstone, he held a variety of jobs, including Deputy Sheriff for Pima County, U.S. Deputy Marshal, City Deputy Marshal, and Wells Fargo Guard. He also supplemented his income as a saloonkeeper and gambler. He died in Los Angeles, California on January 13, 1929. He was 81 years old when he died. He was married three times. He had four brothers: Virgil, Morgan, James, and Warren. 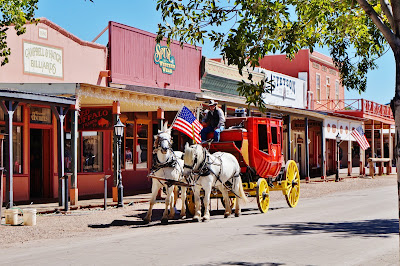 Wells Fargo & Company, 1879. They had several locations in Tombstone and were the major carrier of mail, bullion, and payroll in the early years. While they hired agents and shotgun messengers, they contracted with local stage coach lines to carry express cargo. Messengers rode beside the drivers to protect passengers and valuable cargo. Wyatt, Virgil and Morgan Earp were shotgun messengers while in Tombstone. Due to the amounts of money, bullion, and valuables they carried, Wells Fargo was a major target for robbery. In one attempt to rob the stage, a driver and messenger were shot, though the robbery was not successful. The messenger, Bob Paul, was able to regain the reins and drive the stage safely to Benson. They hired detectives to apprehend the thieves and offered rewards for their capture. In 1918, the federal government combined all of the express companies and only the banking portion retained the Wells Fargo name. 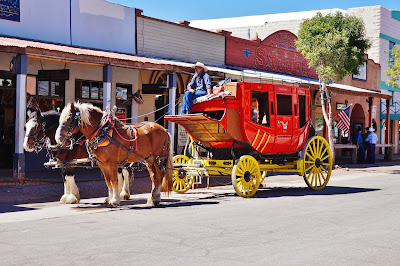 One thing I enjoyed was that it is a very dog friendly town. There are water bowls spread throughout the town, and they are even allowed on the stage coach rides that run through the town. We did not go and see the "gun fight at O.K. Corral" because they have turned Tombstone into a tourist town and charge for everything. So, we just walked up and down the streets and had lunch at The Crystal Palace Saloon.  We met a woman outside of the restaurant and said that Hayley and Lucy were welcome in the restaurant when we came for lunch.

Today Tombstone is full of shops and restaurants.  There are some residents who work in the town, some in the shops and some tending the horses and carriages. Of course, there is a host on the carriage who tells you about the town. 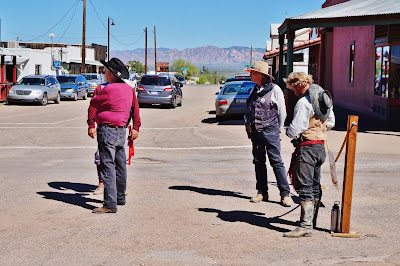 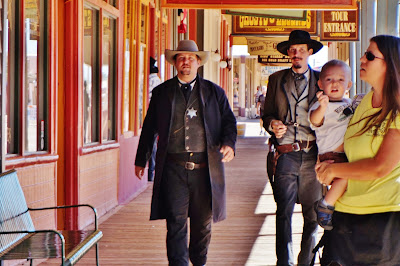 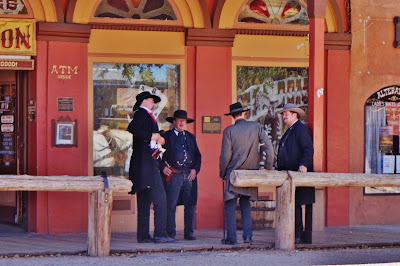 Bob Hatch and John Campbell a billiard parlor in 1880. Bob Hatch was a colorful character and an amateur thespian. It was said he kept a jar of frogs on the counter as their croaking helped him predict the weather. He followed the Erps to the famous gunfight, assisted in removing the gun from dying Billy Clanton's hand, and testified at the hearing. A few months later, he was playing a game of billiards with Morgan Earp when the back window was shattered by a gunshot and Morgan fell, mortally wounded, and died within the hour. Hatch ran for sheriff in 1885, but was defeated by John Slaughter. Campbell ran several saloons in Tombstone and served as a city councilman for a number of years. The saloon and billiard parlor burned in the 1882 fire and was one of the first to rebuild. Prohibition closed all the saloons in 1914. This area deteriorated badly in the following years. In 1945 this old building was remodeled for a new building. This is one of Tombstone's historic buildings. 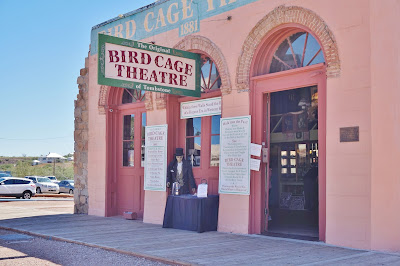 Runabouts were built for running around and getting things done. Cheap, simply and sturdy, runabouts could be rented at the O.K. Corral for $6 a day. Runabouts were light and practical. They could easily be hitched by one person, and they could be pulled over long distances by one horse. They were unencumbered by tops, fenders, or other accessories that added weight. These runabouts are not as old as the other buggies in the collection. They may have been built and driven by the Amish who do not use automobiles. 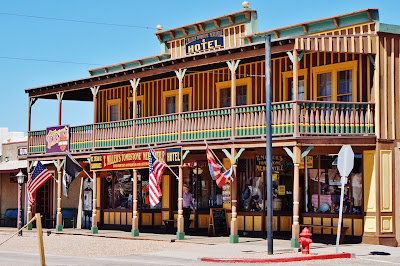 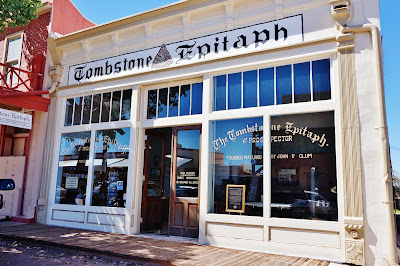 This is Tombstone's printing office. From the invention of movable type in the 1450s up until the 1980s, letters were set in a mirror image, facing backwards. Skilled typesetters were required to catch spelling and grammar mistakes while reading backwards. Many early typesetters and printers were deaf, since being able to hear in a noisy room was not as prized as being able to concentrate and spot typographic errors in the type. Printers especially minded their "Ps and Qs", since these letters were mirror images of one another.
On December 28, 1881, while crossing 5th Street, Virgil Earp was ambushed and shot. Would be assassins hidden in a new building under construction opened fire with shotguns. He survived, but lost the use of his left arm. The building became a popular saloon called the Bucket of Blood. In 1909 it was remodeled into a tourist hotel. In 1928 it became the Owl Cafe and Tourist Hotel. The historic building burned in a fire in 1942, thought to have begun in the cook's quarters. A new building was erected in the 1950's and in the 1970's it became the Longhorn Restaurant. 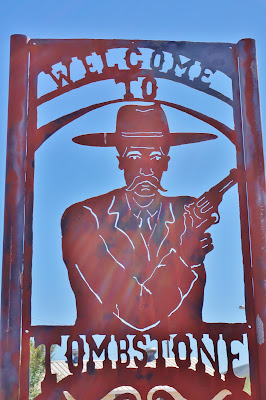 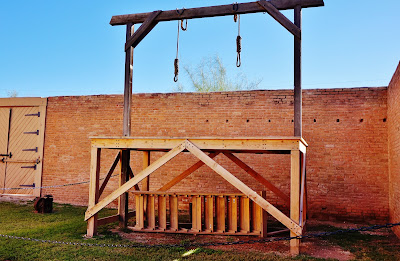 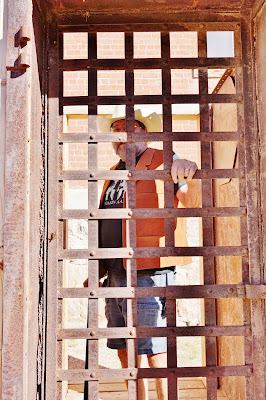 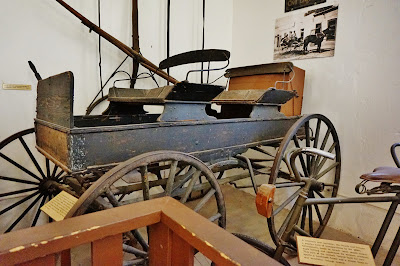 J.A. Rockfellow was a civil and mining engineer for Cochise County in the late 1890s. This vehicle was called a "mountain wagon" and was built in Tombstone in 1898. When surveying, Rockfellow measured distances by tying a cloth around one spoke of the wheel and having a companion count the number of revolutions. The first official survey of Cochise County was done in the manner in this wagon.
When asked about his part in the west's celebrated gunfight, Wyatt Earp repeatedly replied, "It was a street fight between my brothers, Doc, and myself and those who believed they could shoot down the Earps."
The fiction writers and historical novelists of the 1920s and early 1930s supplied the exciting sobriquet, "The Gunfight at the OK Corral." In spite of historical proof, the statements of several participants, court testimony, Wyatt Earp's handdrawn maps of the fight, and the written record of many witnesses, it has remained "The Gunfight at the OK Corral." Wyatt Earp, in a rare moment of laughter, chuckled over the illusion that the fight took place at the OK Corral.
The exact location of the fight was on Freemont Street, the south side just east of Third Street. Frank McLaury and Wyatt Earp were the first to fire; Frank and Tom McLaury and Billy Clanton died while Virgil and Morgan Earp were wounded. The fight actually started in a vacant lot before they backed up onto Freemont Street.
After a complete study of the fight, participants, clothing, guns, buildings, time of day, Mr. Perceval has forever captured the most important moment. Morgan Earp is down from a shot from Billy Clanton's gun and is shooting at Frank McLaury who, already shot, is desperately making his way to the north side of Freemont Street where he died. Tom McLaury, after receiving his death blow from Doc Holliday's shotgun, slumped down by the two span telegraph pole on the corner of Third and Freemont. Virgil and Wyatt have rendered Billy Clanton hors-de-combat with bullets in his wrist and chest. Billy is obscured momentarily as he slumped down beside the small dwelling that formed the western boundary of the vacant lot. Later, with a heroic effort, he crawled onto Freemont Street. The birds eye view of the painting captures the most dramatic moment.