Another stamp for my National Park Passport, and a new national monument, issued in 2015 by President Obama. Designated as the Waco Mammoth National Monument, this very special paleontological site represents the nation's only recorded discovery of a nursery herd of Columbian mammoths.

In 1978, two men discovered an unusual bone in a ravine near the the Bosque River, within the northern outskirts of Waco.  They took the find to Baylor University's Strecker Museum, where museum staff identified it as part of a Columbian mammoth femur.  This now extinct species lived during the Pleistocene Epoch (Ice Age) and inhabited North America from southern Canada to as far south as Costa Rica. 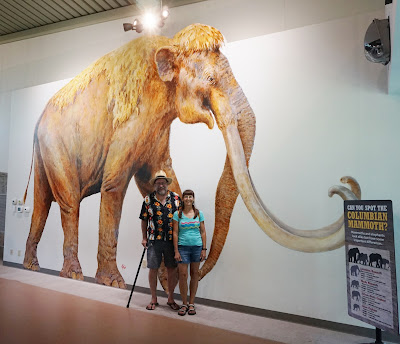 Strecker Museum staff organized a team to investigate the site. For the next 20 years, staff, students, and volunteers spent hours excavating the site.  Their efforts uncovered a nursery herd of Columbian mammoths that appear to have drowned together in a single natural event between 65,000 and 72,000 years ago.  The excavation also discovered the remains of additional mammoths and other Ice Age animals, including a Western camel, saber-toothed tiger, dwarf antelope, American alligator, and giant tortoise. 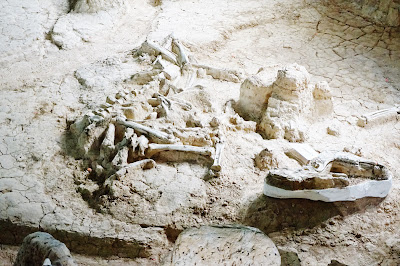 
Mammoths originated in the Old World and entered North America about 1.8 million years ago. The Columbian Mammoth is descended from these early immigrants.  They were one of the largest mammals to have lived during the Ice Age. The Columbian  mammoth is a distinct relative of the woolly mammoth, but woolly mammoths lived farther north in much colder regions.﻿
﻿﻿ 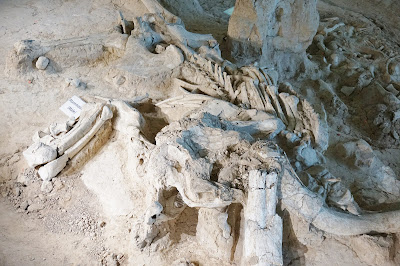 One of the animals buried in the same layer as the nursery herd of mammoths was a camel. Scientists don't know if the camel was living with mammoths or if the camel was here by chance. However, camel and mammoth fossils are often found near each other, indicating they lived together on the same landscape. Both species ate plants and preferred open grassland landscapes with scattered trees.

We can learn the mammoth's ages and genders by examining their remains. Mammoths develop six sets of teeth during their lifetimes, and each set got larger and larger.  The female mammoth buried here was on her 4th set of teeth, putting her in her early 20's when she died. Also, the shape of her pelvis tells us that she was a female.  The female pelvis is quite a bit smaller than the male pelvis. Her large, ridged molars were specialized for crushing and grinding, and they spent about 20 hours every day eating between 300 to 700 pounds of grass and other plants. As a result, mammoths produced around 400 pounds of dung daily.

A Columbian mammoth can grow to an average height of 14 feet at the shoulder. The thigh bone is the longest bone in a mammoth's body and robust enough to easily support the mammoth's immense weight of nearly 20,000 pounds. They stood two to four feet taller and weighed up to 8,000 pounds more than woolly mammoths.

Mammoths, along with many other Ice Age animals, became extinct about 10,000 years ago. These included saber-toothed cats, lions, cheetahs, camels, horses, giant bison, giant sloths, giant tortoises, short-faced bears, and giant armadillos. Scientists haven't yet determined the cause for this extinction. Two factors may have been critical: the climate was changing and humans were beginning to populate North America. 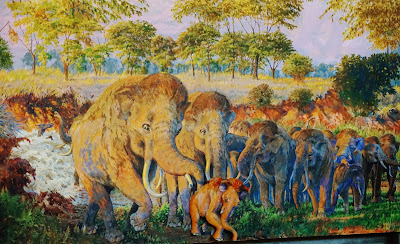 Columbian mammoths share many similar characteristics with our modern day elephants of Asia and Africa. Some of these features include having 4 teeth in their mouths at a given time, one above and below on each side of the skull and jaw.  Mammoths had six sets of teeth during their lifetimes, which could span up to 75 years. The mammoth's tusks are modified incisor teeth and grew as long as 16 feet, weighing up to 200 pounds each. And Columbian mammoths walked on their tiptoes, an internal sponge-like pad behind the bones of their feet cushioned their immense weight.