We took annual vacations to somewhere, but a few times they were out west to Colorado. Jim saved up his vacation time and I took my two weeks. During this trip to Colorado we took our nephew, Jonathan. We had a big brown van which we called the Brown Beast, which was a great vacation vehicle with bucket seats in front, a bench seat in back and a huge area in the back to lay down. Jim built a deck so we could cram all of our camping supplies under the deck and had sleeping bags on top of the deck to lay down on.

As you can imagine, with only two weeks a roughly 1500 mile drive from Stone Mountain, Georgia to Colorado, we usually made it in three days. One stop was St. Louis, Missouri where we visited the Arch and even rode up to the top.

Some place we found a play area with a small carousel and a slide which Josh, Jacklyn and Jonathan had fun on. 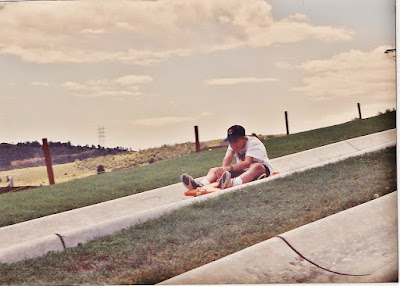 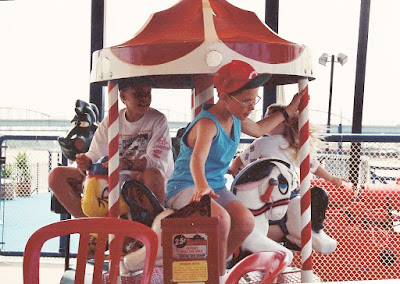 We finally made it to Estes Park, just outside the boundaries of Rocky Mountain National Park. We found a nice area to put up the tents, one for Jim, me and Jacklyn, and one for Josh and Jonathan. We also had a screened canopy where we put the picnic table and some of the food. I think we kept most of it in the back of the van (because of bears).

We drove into the park, and enjoyed the scenery quite a bit. 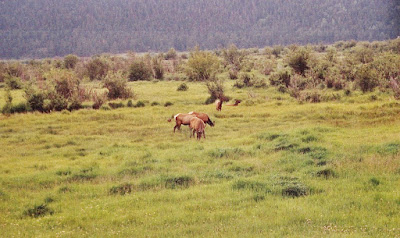 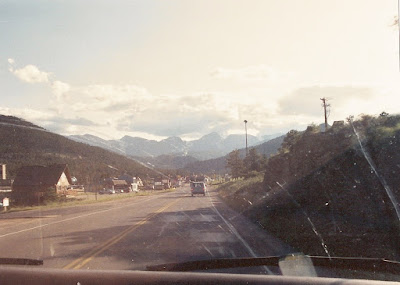 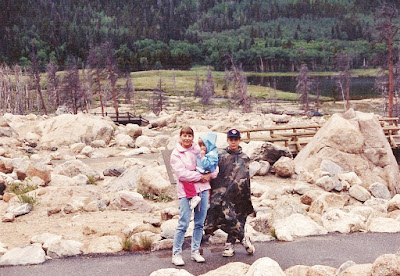 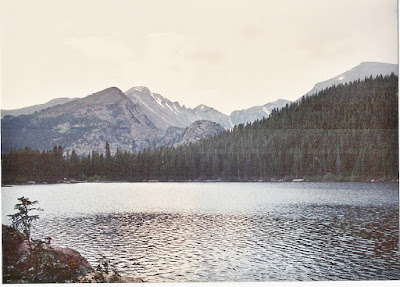 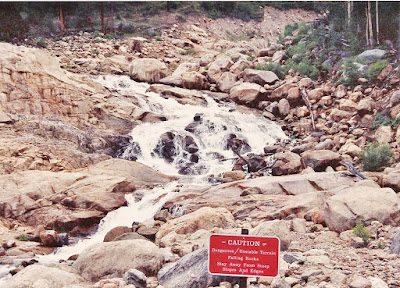 Before July 15, 1982 this was a pleasant place of scattered aspen and ponderosa pine. But that morning the dam at Lawn Lake gave way, and the cascading stream below it became a raging flood. Some 300,000,000 gallons of water smashed down the five mile length of Roaring River. The water snapped trees like matches, tossed boulders like playthings, and filled the air with its awful roar. For several hours the water tore at deposits of glacial debris, then disgorged its chaotic load onto the floor of Horseshoe Park. This alluvial fan seen here and the violently carved streambed are what remain. 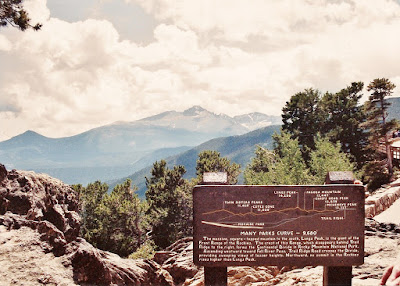 Air pollution has a big impact on the visibility of the mountains. The two pictures below are of Deer Mountain, which lies one mile from this point. Color photographs were taken three times daily to document changing pollution levels, weather patterns and sun levels. 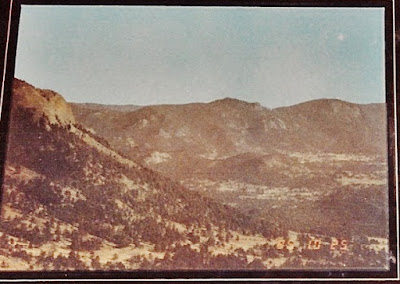 On a clear day in Rock Mountain National Park, average visibility is 83 miles. Ninety percent of the time however, here ~ and at all National Park monitoring sites in the lower 48 states ~ spectacular vistas are degraded by manmade pollution. 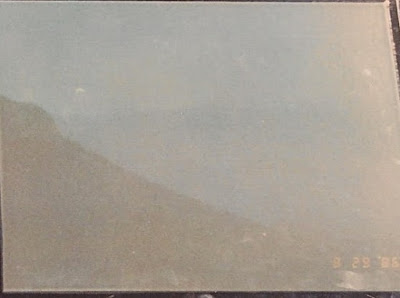 Fossil fuel burning creates tiny airborne particles that scatter light and reduce visibility. Later, these pollutants settle, forming acid's deposits in streams and lakes. In eastern parks, average visibility in the summertime is only nine miles. With such air quality here, Long Peak would be masked by haze. 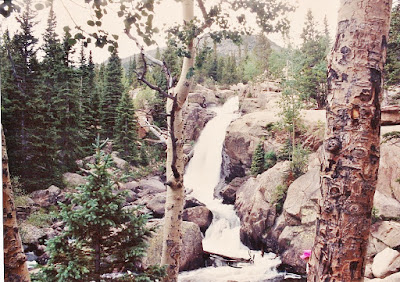 Getting to the top of the mountain pass, we found a glacier that we had to stop by and let Josh and Jonathan have fun sliding down. Of course, they got very wet butts from that, but they had fun anyway. 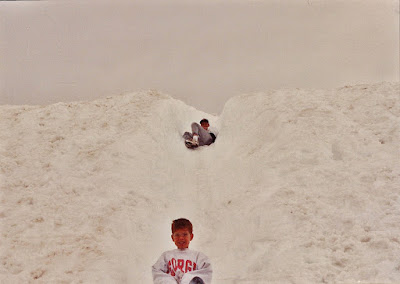 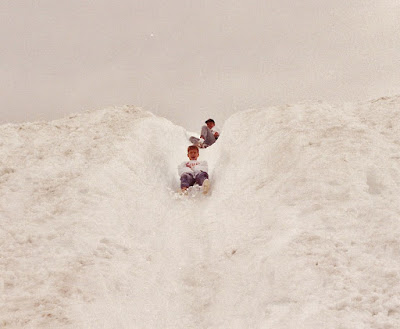 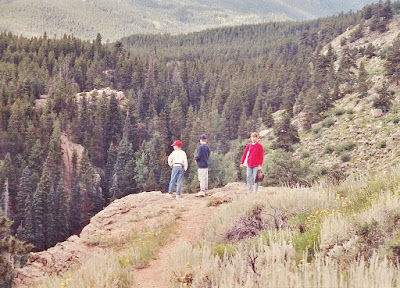 After leaving Estes Park, we drove south to Colorado Springs where we visiting the Cliff Dwellings and Garden of the Gods. 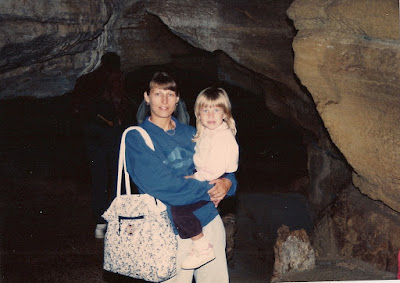 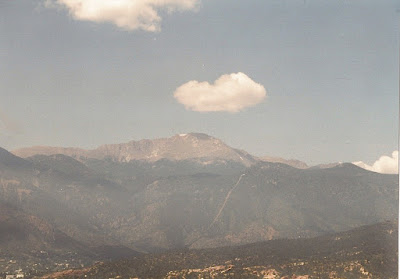 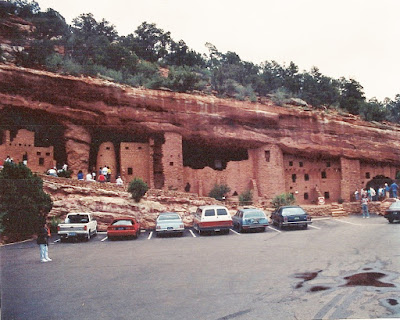 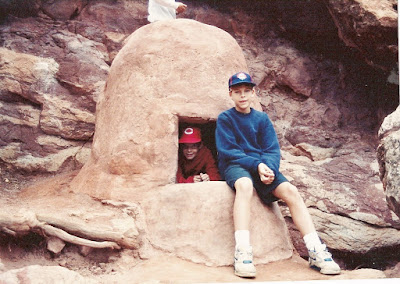 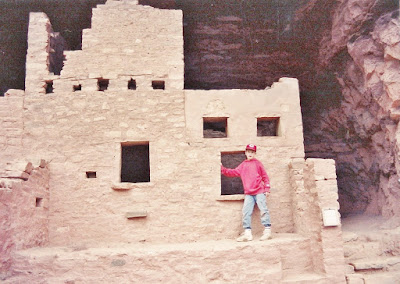 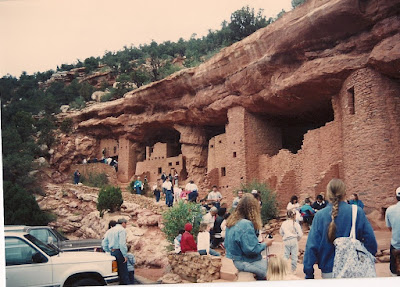 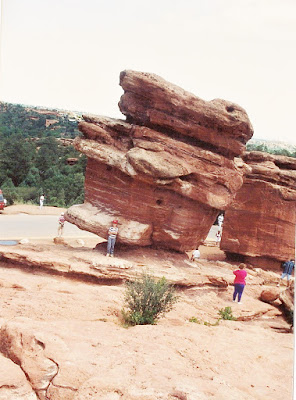 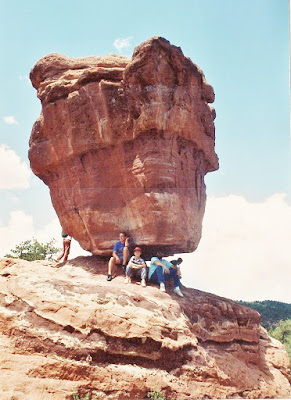 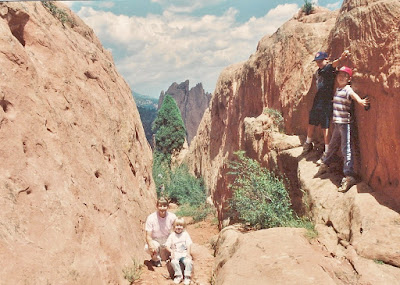 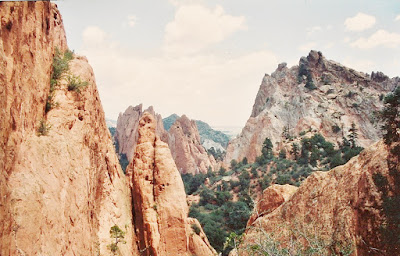