The Alibates Flint Quarries National Monument was established in 1965 as the first national monument in Texas. The NPS arrowhead identifies a special place which is owned by all Americans.

The Alibates Flint Quarry was first inhabited by the Paleo-Indians at the end of the last ice age, some 13,000 years ago. The first inhabitants were nomads who followed herds of prehistoric mammoths or bisons across the plains. Until white settlers forced the native people out of the area in the late 19th century, nomadic people shared a lifestyle that dated back at least 13,000 years. Bands of 30 to 50 people made their homes wherever the mammoth, and later bison, roamed. These herds led people to the Canadian River Valley. Available on the surface, the flint was easily gathered without digging.

Then 800 years ago, a small community built a permanent community in this area. 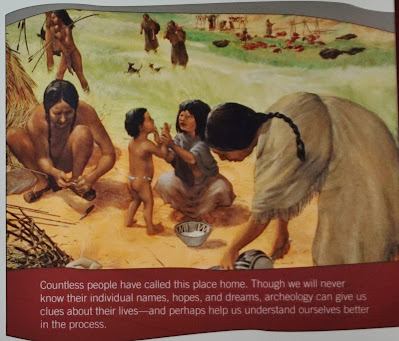 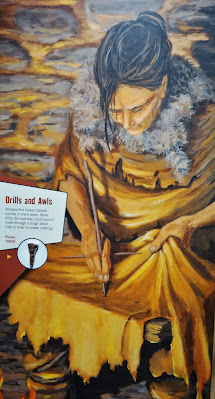 The Alibates flint helped these people in many ways, such as through the use of drills and awls. Stone drills could punch holes through a tough bison hide in order to create clothing. 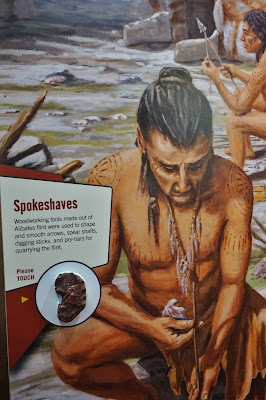 They fabricated tools out of the flint, such as spokeshaves. These were used to shape and smooth arrows, spear shafts, digging sticks, and pry-bars for quarrying the flint. 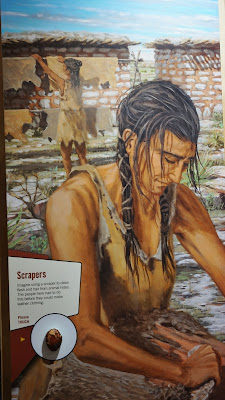 Scrapers were used to clean flesh and hair from animal hides. They had to do this before making their leather clothing. 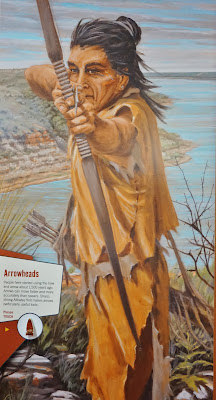 The people started using the bow and arrow about 1,500 years ago. Arrows can move faster and more accurately than spears. Sharp, strong Alibates flint makes arrows useful tools.
Between 1200 and 1450, a Plains Village subgroup known as the Antelope Creek people, built masory structures close to the flint outcropping along the Canadian River. In the 1930s, excavations by the Works Progress Administration uncovered the ruins of two structures now inside the monument. Square and rectangular rooms were living spaces, round rooms were used for storage or burial. Other remains of the now-vanished Antelope Creek culture at Alibates include petroglyphs of turtles, bison, and human feet; cord-making pottery; and thousands of small, narrow flint arrowheads. Turquoise and shell jewelry, pipes, and obsidian also found suggest that Antelope Creek people traded their flint with peoples to the west and north.

How did they survive? It is a truly remarkable that people found a way to survive here for at least 13,000 years. Some only stopped here temporarily while others made this place their permanent home. But they all used the Alibates flint to survive.
These inhabitants wandered all around the quarry area digging pits in which to excavate the flint. Flint quarrying was a specialized activity for the many people that inhabited the area. There are countless rock fragments left behind -- called "debitage" -- which litter the landscape even today. Human hands powered this flint factory using bone, wood and stone to quarry and shape raw flint into the tools that made life easier. There are hundreds of pits that remain today that reveal how extensive the quarrying activity was. Archeologists noticed that all of the flakes show evidence of intentional and consistent breakage patterns.

Some of the arrow head points that were found, that were used by the ancient Indians.

A bison's scapula was used as a digging tool. Not only did they hunt the mammoth and bison, but they also grew crops to supplement their hunting. There is no evidence of architecture, pottery or agriculture at Alibates until about 900 years ago. There are, however, Alibates flint artifacts from thousands of years earlier. Early hunters and gatherers in the Texas High Plains lived nomadic lives, following the herds of animals they hunted. They likely set up temporary camps around this area and used the flint to make tools.

About 900 years ago people settled around around this area where they could find the Alibates flint. They built houses and cultivated small gardens to supplement hunting. They began to quarry more flint than they needed for their own use, so they traded the surplus stone for things that were not available in their valley.
Alibates flint was traded over hundreds of miles. Different cultures regularly exchanged items with each other, spreading useful tools and beautiful crafts. Jewelry made from seashells along with obsidian (volcanic glass) was discovered at the Alibates Quarry, showing evidence that trade and exchange worked both ways.
Datable evidence of life in the villages seems to have come to an end about 600 years ago. European explorers do not record seeing any villages in the Texas Panhandle. The Antelope Creek people left the area, probably joining other groups. 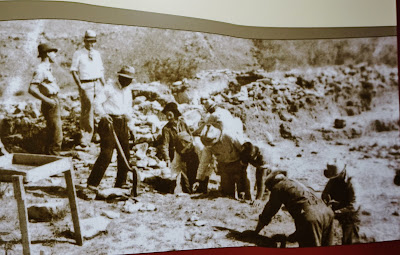 Excavators during the 20th century provided valuable information about the cultural significance of the area. They discovered that the nomads continued to seek flint at Alibates after the Antelope Creek culture disappeared. Beginning in the mid-16th century, a new group of people began to enter the area called the Europeans. These latest arrivals also took advantage of the flint, using it to create the spark that fired flintlock guns. Eventually the focus of this area turned to ranching, farming and energy production. 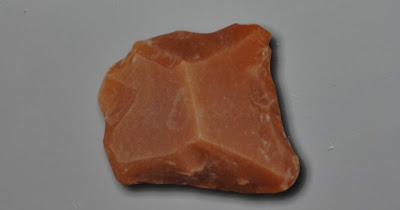 Alibates flint was used in the flintlock guns which occurs by striking flint against steel. Both Indians and European settlers used the flint when guns replaced arrows on the Texas High Plains. 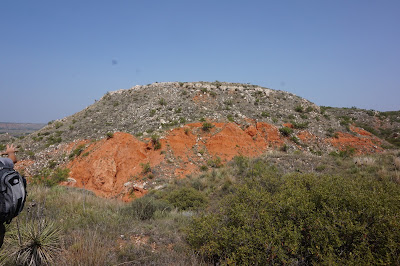 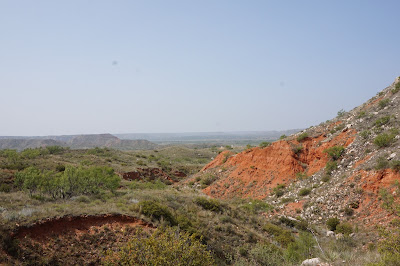 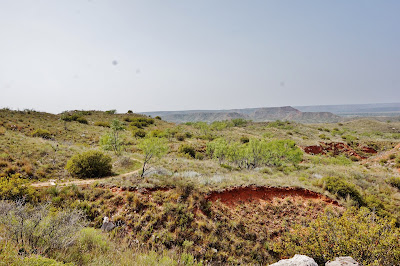 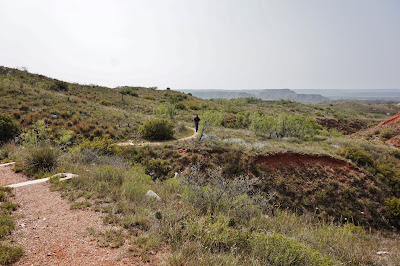 These pictures are the Alibates Quarry landscape. Red dirt, cactus, low brush, and lots of flint. At Alibates, the silica interacted with the 250 million-year-old dolomite to form flint. Where did the silica come from? One theory is that enormous volcanoes erupting about 670,000 years ago in what is now Wyoming spewed silica ash across the High Plains. Rain then washed the ash into cracks in the dolomite where it solidified into Alibates flint. 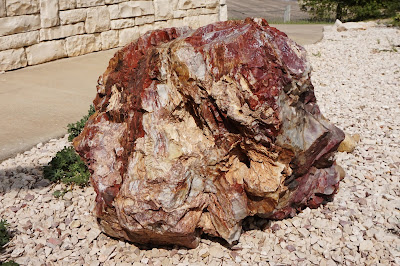 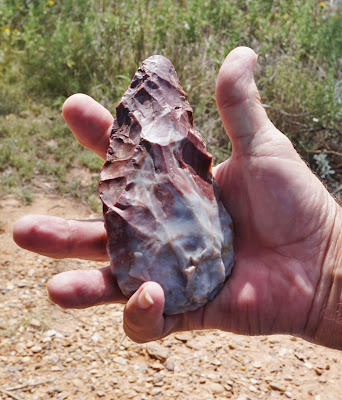 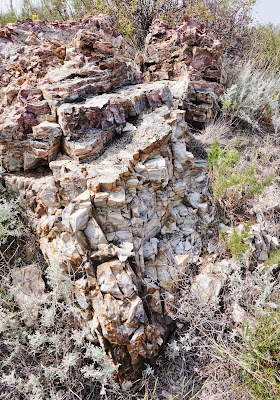 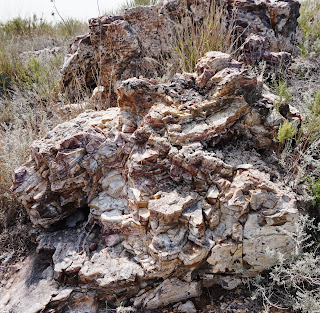 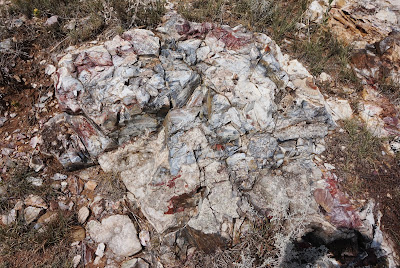 We saw this critter along the wall by the restroom, and the one below this one at the Visitor Center while we were eating lunch. All of a sudden, one of the guys came out and said he saw a scorpion. We looked all over and found it underneath the runner on the rocking chair Jim was sitting in. I asked the guy how he saw that little thing from inside ~ he said he looks for them. Lucy was sitting there with us so we had to keep her away from the little critter, and then it crawled up the wall. It really was tiny - about 1-1/2" long. The picture makes it look bigger than it was. Now the millipede - that was huge. 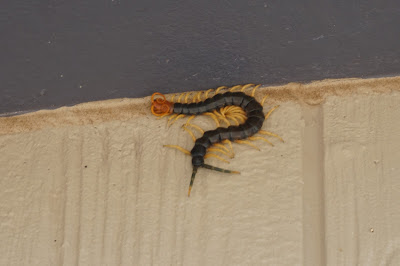 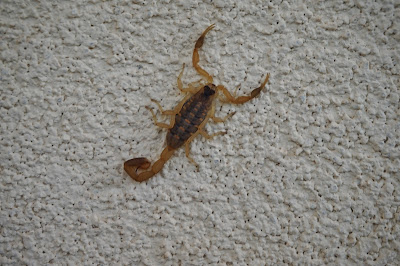