We visit Sebastian, Florida every year or so as our good friends Bill & Julie live there. We pull our trailer into their back yard where Bill has installed a 30 amp plug for us to hook into. Our dogs run around the pond and we take our walks on Old Dixie Hwy, the next street over.


I took this picture standing in their driveway one morning just before sunrise: 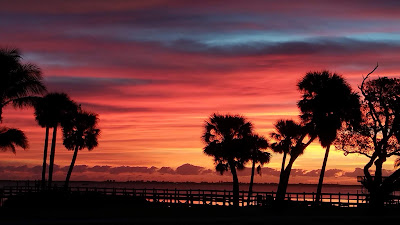 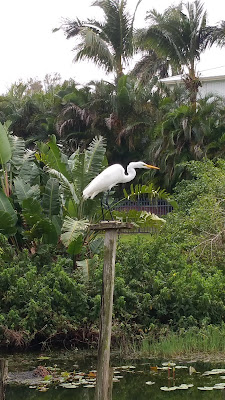 An egret sits on a pole next to the pond in their back yard looking for fish.

When coming to Sebastian, be sure to stop by the Visitor's Center located on Main Street and pick up a visitor's guide and a map of the area. The Sebastian River Area is located along the Treasure Coast and is well known for the rare antiquities that have washed upon its shores and it's snow white beaches and blue waters. Be sure to visit the two museums that share the treasures that have been found in the water and on the beaches. The first is is Mel Fisher's Museum and Gift Shop located right on US 1 in Sebastian, and McLarty Treasure Museum, located on AIA. 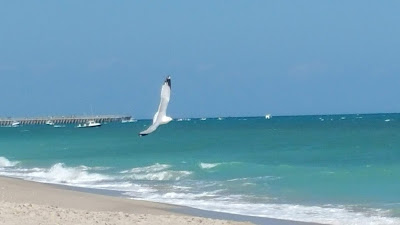 Sebastian has many restaurants and night life, from a Tiki Bar with keraoke, Squid Lips right on the water, to Earl's Hideaway Lounge, where many bikers hang out. 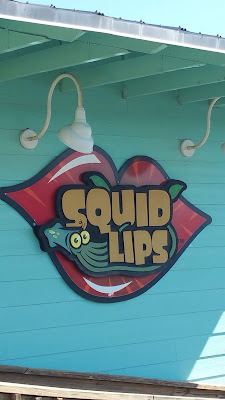 Sebastian also has a state park right near the inlet, which also has its own museum in the park -- Sebastian Inlet Fishing Musuem. There is also an abundance of annual events that take place around the city, such as Art in the Park, Pelican Island Wildlife Festival, Concerts in the Park, Grant BBQ Fest, Sea Turtle Walks, to name just a few.

There is also a sign welcoming one to Sebastian: 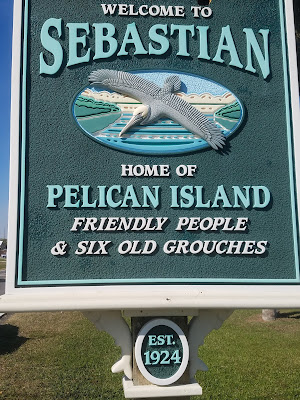 I was wondering who the "six old grouches" were, so I looked it up. The last person to research this issue was Russ Lemmon, Indian River columnist, in 2009. According to his research:

We were aware of a popular theory: "Six Old Grouches" referred to members of the first Sebastian City Council in 1924. (Trivia: One of the councilmen was Charles Sembler, whose namesake great-grandson is the former Indian River County tax collector.)  George Keyes, 93, one of the founders of the Sebastian Area Historical Society, says he's been told that "a number of times by some of the old-timers, but there's no documentation" to support it. Sebastian City Clerk Sally Maio says the closest thing she has found is a 1954 resolution that approved putting up the first sign. So, should "credit" for the catchy phrase go to the '54 council?

Logically, linkage to a generic city council makes the most sense. (Never mind Sebastian has had a five-member council since the early 1970s.) However, without documentation, it's more in the realm of folklore. I mean, who's to say Carol Anne Mondshour's 1989 painting entitled "Six Ole Grouches" isn't closer to the truth? It shows six pelicans sitting side-by-side on dock pilings. Maybe she was trying to say the birds would get testy if humans didn't do everything possible to protect Pelican Island. A small wood carving by Jack Goble in 1995 depicting three men and three women as the grouches once again made the council the target.

JP Matty's, a restaurant on County Road 512, has a "Six Old Grouches" sandwich. Co-owner Jerry Peterman says it's been on the menu since the place opened in November 2003. Peterman says he doesn't know the origin of the saying. "I think due to the economic situation, the six has risen to 600," he joked.

It's a shame whoever coined the phrase doesn't get credit for it today. George O'Neill, of the Sebastian Area Historical Society, tried to warn Koch and me:  "The more you ask, the deeper it's going to get because nobody knows, really."

So there you have it - no one knows where the saying came from and why it's on the sign. One of the many mysteries in life.

I rode my bike down Old Dixie Highway, a side street behind our friends Bill & Julie's house on Indian River Drive, and then cut down to the sidewalk that runs along the river. Unfortunately, the sidewalk does not go as far as their house, so I took the side street to avoid traffic. There is an osprey family that has nest on Old Dixie. The city also puts platforms on top of telephone poles so that ospreys can build their nests. 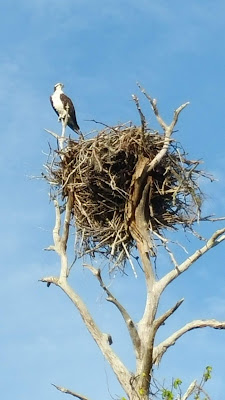 We also stay at Sunshine Travel RV Park, which is near the intersection of Hwy 512 and I-95.


Very close to the park is the Fellsmere Trailhead with a great bike/walking trail. The trailhead is within walking distance (.9 mile) and certainly within biking distance. Jim & I enjoyed a ride to the trailhead and along the trail, which went over I-95. There is also a long paved trail along Hwy 512 which goes quite a ways toward Sebastian. 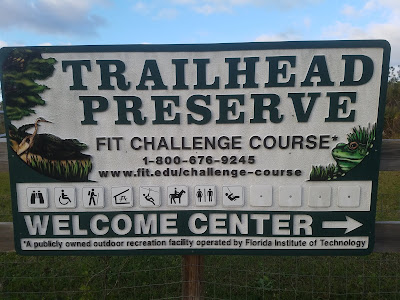 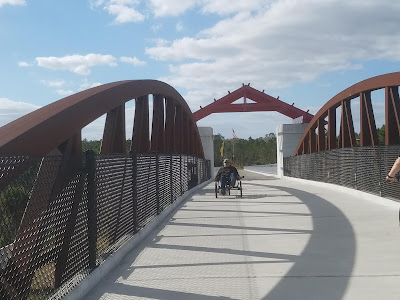 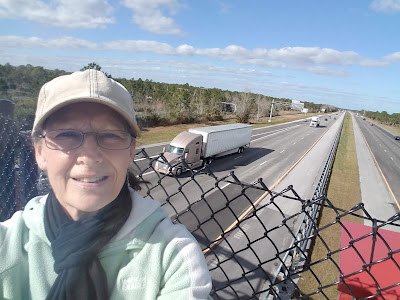 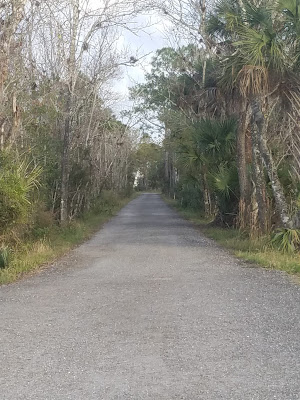 The trail was built from the Fellsmere Railroad, which was built in 1910 between Fellsmere and Sebastian replacing an old narrow gauge railway built in 1896. The Fellsmere Farm Company used the railroad between Sept. 1910 and May 1, 1911 to carry logs to the Florida East Coast Railway in Sebastian and for transporting supplies, materials, etc. The Railway opened to the public on May 1, 1911 and ran four passenger trains daily with two on Sunday, to and from Sebastian and Fellsmere. On November 30, 1952, the railroad officially ceased operations after 42 years of service.

Here are some fun pictures of the Sebastian area that I took during my bike ride into the city: 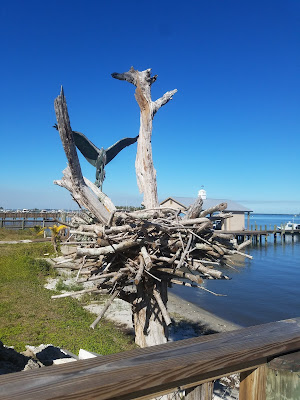 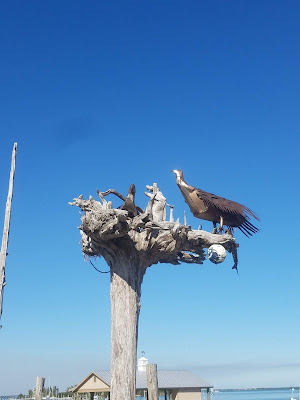 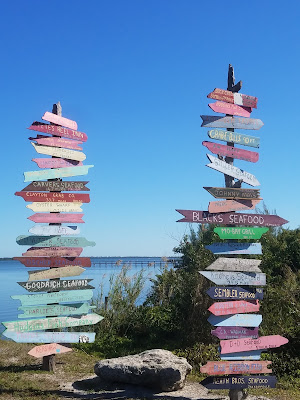 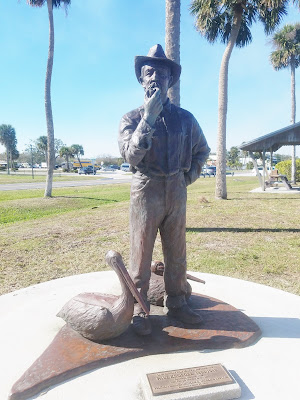 
This live oak tree is across the street from the Visitor's Center on the corner of Main Street and Indian River Drive in Sebastian. It was planted by Robert Hardee, Jr. in 1891. His mother, Emma Hardee, fought to save it when Main Street was paved in 1925. We see that she succeeded in saving the tree as the road goes around the tree in this location. 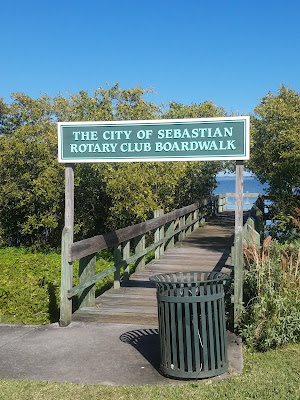 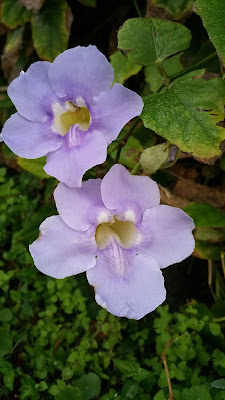 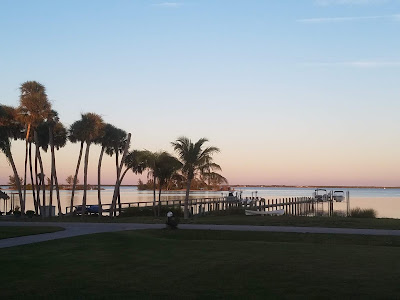 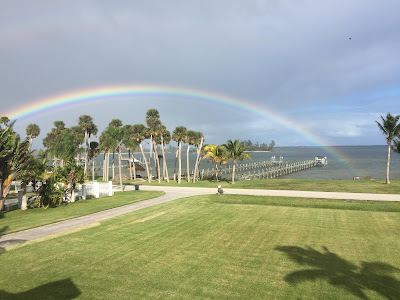 When we left Sebastian, we headed inward to the west side of Orlando. As full time RVers, we stay at RV parks we belong to. Our stay this time was two weeks at the Thousand Trails in Clermont. The park is great but when you venture out to Walmart and the road, it's a zoo. There are A LOT of snowbirds who come down from the north and Canada to spend the winter in this part of Florida. This area is much too crowded for us - we would much rather spend our time in the Sebastian area. It's more laid back and less crowded. Plus, there is everything you need from Walmart, Publix, Goodwill, Lowe's, Home Depot, and just a few miles south in the heart of Vero Beach, any other store you may need.