We took a tour of Honey Island Swamp. Our guide grew up in New Orleans and was very educational. He knew all about the area and the history of the swamps, animals and trees. 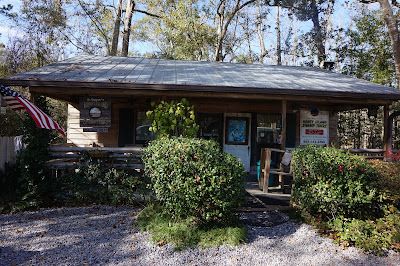 Since I could not remember everything he talked about, I took the following from Wikipedia and other sources. 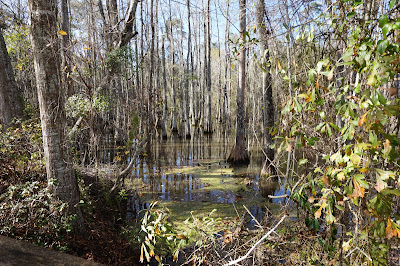 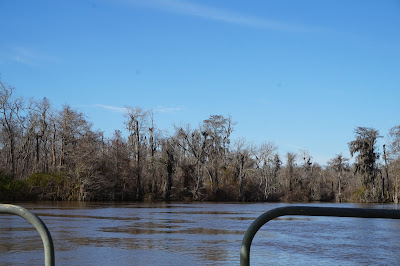 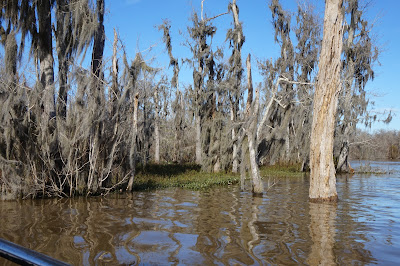 The Honey Island Swamp is a marshland located in the eastern portion of the U.S. state of Louisiana in St. Tammany Parish. Honey Island earned its name because of the honeybees once seen on a nearby isle. The swamp is bordered on the north by U.S. 11, on the south by Lake Borgne, on the east by the Pearl River and the west by the West Pearl River.  The Honey Island Swamp encompasses almost 70,000 acres, more than half of which is preserved for posterity as part of the Pearl River Wildlife Management Area. The PRWMA is swampy in the south, more hardwood bottomland to the north, home to black bears, feral pigs, cougars, nutria and an abundant year-round and migratory bird population.

It is one of the least-altered river swamps in the United States. Considered by many to be one of the most pristine swampland habitats in the United States, the Honey Island Swamp covers an area that is over 20 miles long and nearly 7 miles across, with 34,896 of its 70,000 acres government sanctioned as permanently protected wildlife area. Animals that live in the Honey Island Swamp include alligators, raccoons, owls, wild boars, nutria, snakes, turtles, bald eagles and black bears. 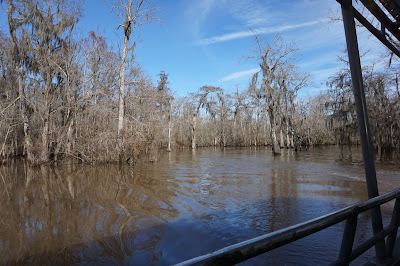 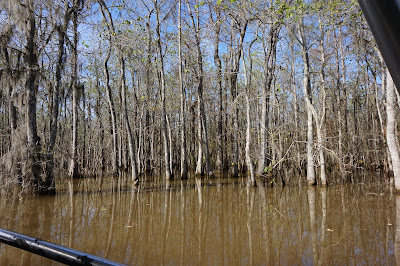 If you look closely at the trees, you will see the "knees" sticking up out of the water. Since the trees are submerged in water most of the time, they do not have roots they put down into the mud, but have knees that stick up out of the water so they can get their nutrients and stay alive. Without their knees out of water, the trees die. 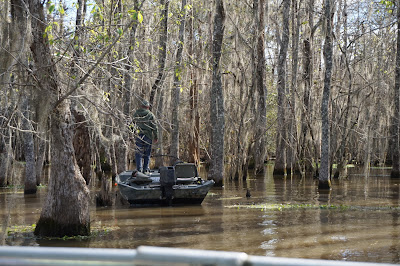 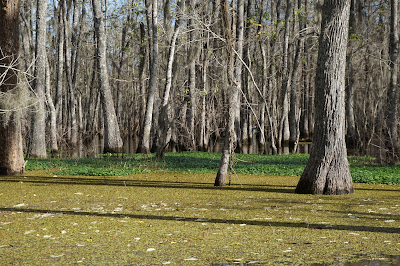 This swamp is also the home of the legendary Honey Island Swamp monster, which has from time to time been known as the "Tainted Keitre". Described as bipedal, over 7 feet tall and weighing 400-500 pounds with matted brown hair and eye-watering bad body odor, the Honey Island Swamp Monster was first sighted by two local men in 1963. Footprints supposedly left by the creature have four toes. The first claimed sighting was by Harlan Ford, a retired Air traffic controller who took up wildlife photography. After his death in 1980, a reel of Super 8 film (click on link to see the film) showing the creature was allegedly found among his belongings.

In 1974 the monster gained national fame after Ford and a friend claimed to have found unusual footprints in the area, as well as the body of a wild boar whose throat had been gashed. Ford continued to hunt the creature for the next six years. The idea of a large, ape-like creature in the area is not without its critics, notably the local ecologist Paul Wagner, who with his wife Sue run nature tours in the area. They claim they have not seen any evidence for it. A local legend tells of a train crash in the area in the early twentieth century. A travelling circus was on the train, and from it a group of chimpanzees escaped, interbreeding with the local alligator population. 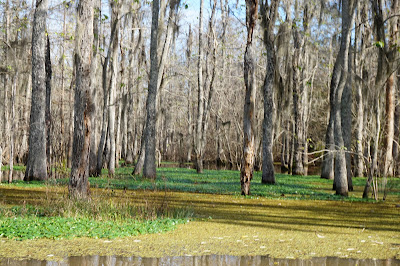 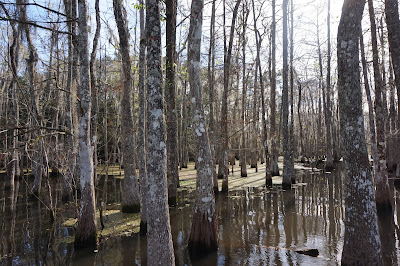 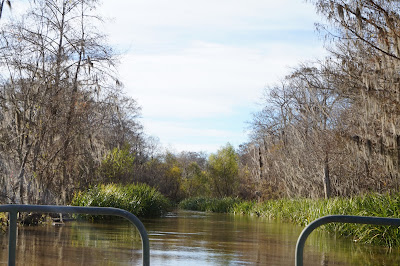 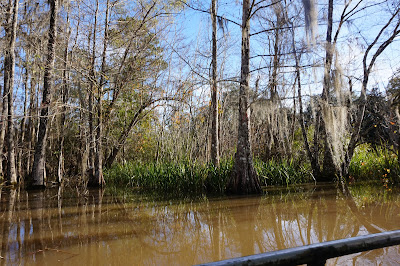 A swamp is an area of land permanently saturated, or filled, with water.

The lush growth in a Louisiana swamp is indescribable. You have to see it to believe it. The most impressive objects in the swamp are the cypress trees which are very graceful in their structure, with their reddish bark, exquisitely bent branches, and delicately fine leaves. Bald cypress prefer wet, swampy soils on riverbanks, floodplains, or wet depressions, but are widely adaptable. Unlike most conifers (which are evergreens), the bald cypress is deciduous, and loses its needles in the fall, giving the tree a "bald" appearance). The Louisiana Cypress grows slowly, but can grow to great height, so that in some swamps, though tall, they will not have a cone on top, which has been swept away by past hurricanes. Cypress trees can live to be hundreds of years old.

According to our guide, the muddy water comes from the muddy bottom that fills the swamp and holds a multitude of organisms that feed the fish and other wildlife; it shows that the swamp is healthy and able to sustain all the wildlife that comes to the area. He also said that many of the trees were cut down but one was left to grow. I don't recall how old he said this tree was. 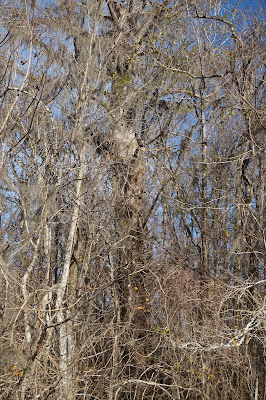 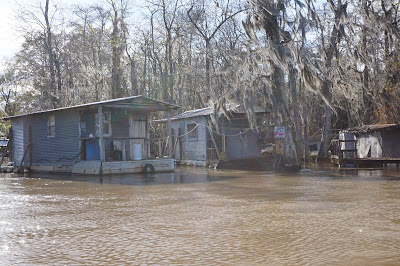 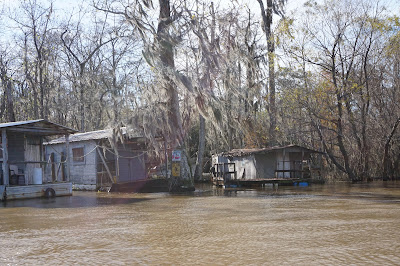 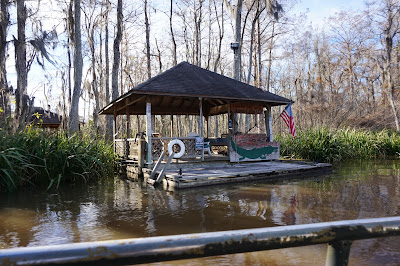 There are also people who build water houses along the river's edge where they fish and spend vacation time. Some of these houses are very old and run down; others fairly new. 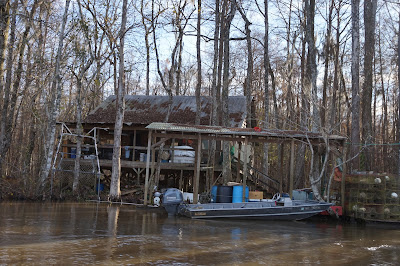 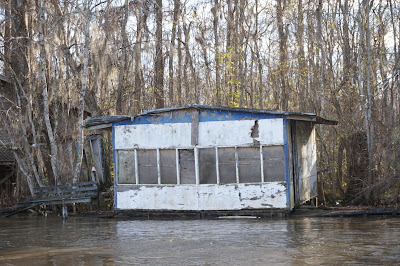 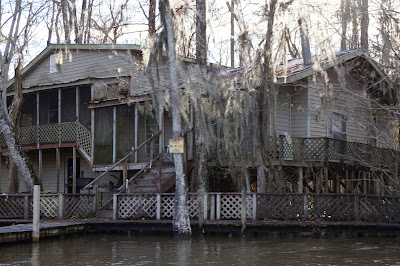 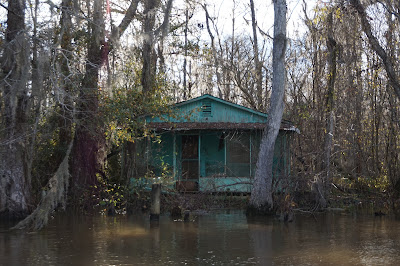 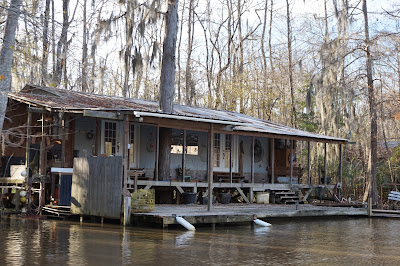 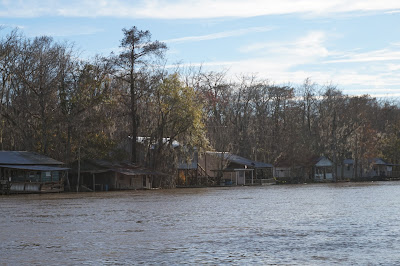 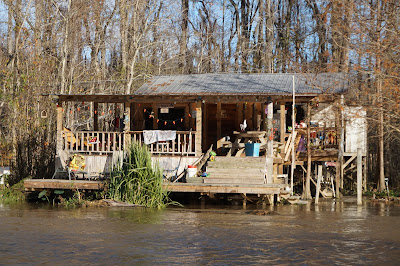 We did not see much wildlife since we went in the middle of winter. The big alligators were already in hibernation; the water snakes were gone as well. The only thing we did get to see were two juvenile alligators out sunning themselves. 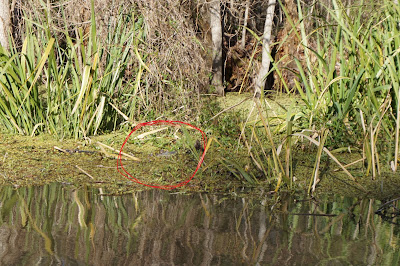 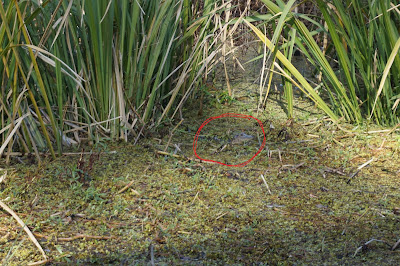 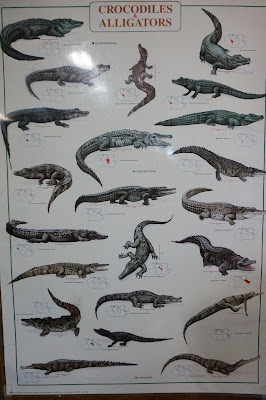