Gates of the Mountains, Helena, Montana

The Gates of the Mountains boat tour starts out in Holter Lake and goes up the Missouri River. For over 125 years tours have taken place showing guests the route taken by Lewis & Clark in 1805. The first boat was a steamboat and could only take guests downstream, where they had to get off the boat and were driven back in a horse & wagon.

Today they have diesel powered boats that take guests downstream and back. Meriwether Lewis named the Gates of the Mountains on July 19, 1805. He wrote in his journal "this evening we entered much the most remarkable cliffs that we have yet see. These cliffs rise from the waters edge on either side perpendicularly to the height of 1200 feet."

Today 20 miles down the Missouri River is a hydroelectric dam, which enlarged Holter Lake. Holter Lake has a sense of peace and tranquility that Lewis didn't feel.

He continued "every object here wears a dark and gloomy aspect. The towering and projecting rocks in many places seem ready to tumble on us." It was raining that day in July 1805 making the light colored limestone as dark as igneous rock he might have mistook it for. The Madison Limestone cliffs are punctured with hundreds of small holes, caves and natural bridges showing the force of the Missouri River as "the river appears to have forced its way through this immense body of solid rock for the distance of 5 3/4 miles and where it makes its exit below has thrown on either side vast columns of rocks mountains high." 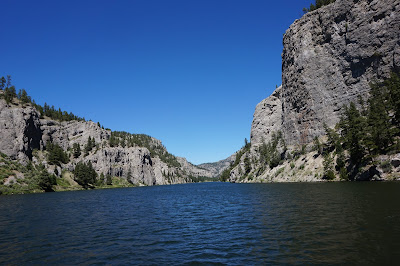 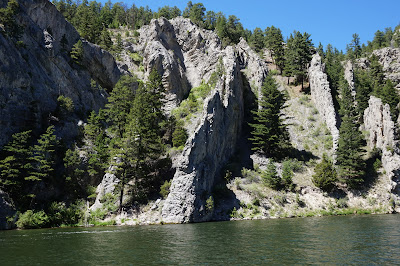 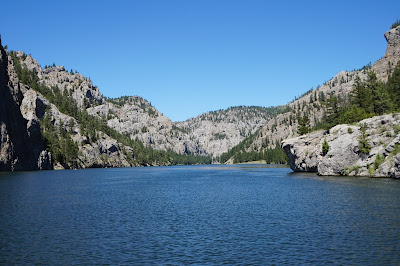 Some of the holes and ledges are nesting sites for a variety of birds including Peregrine and Prairie Falcons, Osprey, White Throated Swifts, and several different Swallow species. We were told that Big Horn Sheep, Black Bears, Mountain Goats, Moose and Deer inhabit the rocks, but we did not see any. 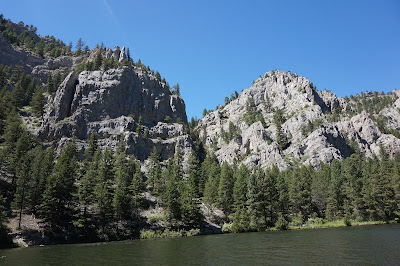 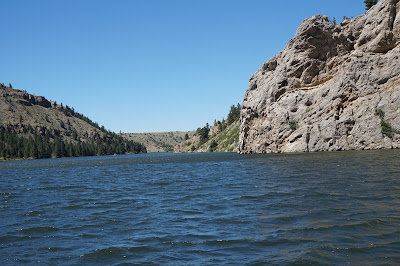 If you look hard enough at the rocks with enough imagination, there are animals in them.  In the two pictures below are elephants. In the first picture it is hidden in the trees, and in the second picture I see it charging forward. 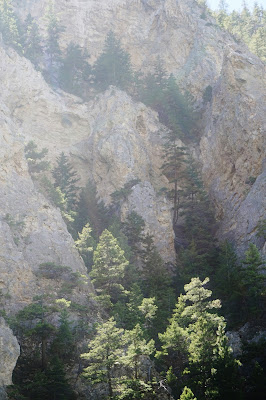 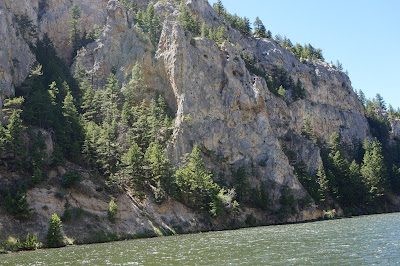 Fire has had a huge impact in the Gates of the Mountains Wilderness. One of the most devastating fires is called the Mann Gulch Fire that killed 13 firefighters on August 5, 1949.


A lightening caused wildfire swept through this canyon trapped the firefighters in this steep canyon. It is on the National Register of Historic Places and changed the way forest fires are fought. 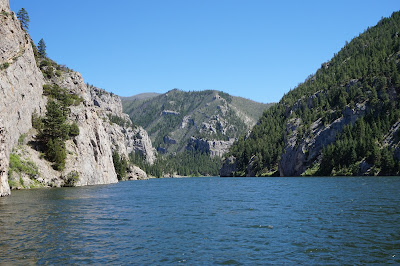 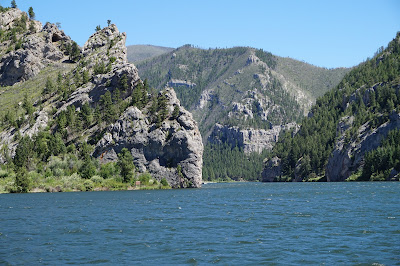 Our guide was very knowledgeable about the area and entertained us with stories about Lewis & Clark, the history of the mountains, the animals we could see, the Mann Gulch Fire, and much more. It was a beautiful boat ride and very enjoyable.  We picked a warm, sunny day for our trip, not too windy and not a cloud in the sky.