Billy the Kid Museum - Another Side to His Story, Hico, Texas

We visited the small town of Hico, Texas, which claims to be the place where the legendary Billy the Kid lived and died.  They claim that Billy the Kid was born in 1860 and died on December 27, 1950 in Hico.  He spent the last days of his life trying to prove to the world his true identity and obtain the pardon promised him by the Governor of the State of New Mexico.  The residents of Hico believe this story and have a museum dedicated to proving his story.  Billy seems to have different names - one place says he was born Henry McCarty aka William H. Bonney aka Billy the Kid.  But another person Ollie L. "Brushy Bill" Roberts claims to be the real Billy the Kid. (See Blog on The Legend of Billy the Kid). 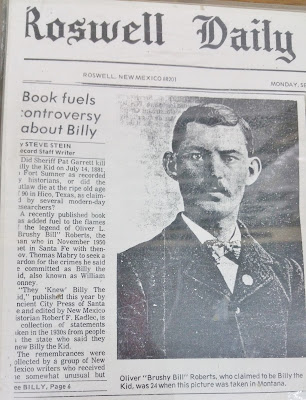 Brushy told his story to William Morrison with the help of historian G.L. Sonnichsen.  It was published in 1955.  Although many have tried, not one statement has been found untrue.  The 1986 publication of "The Hico Legend of Billy the Kid" brought Billy back into the public interest. William Tunstill published "Billy and Me Where the Same" in 1988.  Tunstill traced Brushy's story and proved its accuracy.  "The Trial of Billy the Kid" published in 1991 destroys the traditional legend, item by item (which is that he died in Lincoln, New Mexico around 1881).  (See my previous post dated 9/3/15 titled Lincoln, NM).

With the research complete, most done by Tunstill, Dr. Janay Valdez helped Bob Hefner sort it and write it down in 1994.  The Hico Legend of Billy the Kid was reissued in 1996.  It is the only publication ever printed that contains the petition presented to New Mexico Governor Mabry.
There have been many debates, stories, and opinions fostered over the years. Several men stepped forward claiming to be Billy the Kid, stating that Pat Garrett did not shoot and kill the Kid that dark night over a hundred years ago. In 1948, probate investigator William V. Morrison went to Florida to clear up an inheritance dispute of a man named Joe Hines. During the interviews, it was determined that Joe Hines was Jesse Evans, a Lincoln County (New Mexico) war survivor and an old acquaintance of Billy the Kid.  Evans told Morrison that Billy the Kid was not shot by Garrett; the Kid was alive and living in Hamilton County, Texas, as Ollie L. "Brushy Bill" Roberts.

In June 1949, Morrison visited Brushy Bill.  Brushy Bill said he was born William Henry Roberts on December 11, 1859, in Buffalo Gap, Texas.  He took the name of his cousin Ollie Roberts after his cousin died.  Brushy Bill admitted that he was Billy the Kid because he wanted to pursue the pardon Governor Wallace had promised him in 1879, and be pardoned for his crimes before he died.

On November 15, 1950, Morrison filed for the petition for the pardon promised Billy in 1879. Thomas J. Mabry, t he current Governor agreed to a private hearing to be held on November 29th with Morrison, Brushy Bill, and two historians of the Governor's choosing in attendance.  The pardon was denied.

In 2003, Lincoln County, New Mexico officials petitioned to exhume the bodies of Billy the Kid and Brushy Bill as well as the Kid's motion Catherine Antrim for DNA testing. In September 2004, exhumations were blocked.  A flood  that occurred decades ago washed away the New Mexico grave. Ollie "Brushy Bill" Roberts in buried in Hamilton, Texas.  Without DNA there is little chance that the truth will ever be known.
Was Billy the Kid shot in New Mexico? There are many reasons to believe that Garrett did not shoot and kill Billy the Kid in July, 1881.  John W. Poe, a deputy U.S. Marshall and a deputy sheriff in the panhandle of Texas was employed by the Canadian River Cattle Association to help put an end to the cattle rustling. He coordinated his efforts with Pat Garrett. Regarding the shooting of Billy the Kid, Poe has been quoted as saying, "I had felt almost certain that someone whom we did not want had been killed."  Dan Garrett, Pat Garrett's grandson said his grandfather never killed Billy the Kid. 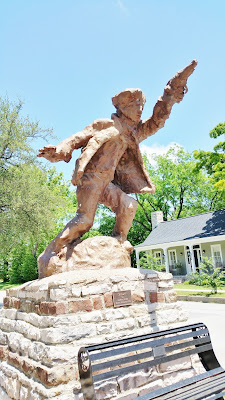 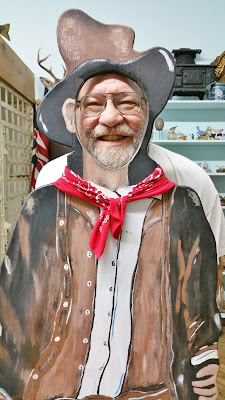