A Collection of Short Videos

This first video is a clip from Facebook, so you will have to click on this LINK to hear President Trump's message to the American People.

The rest of these videos are from YouTube, so I can post them easier. They are all great videos, short enough to truly enjoy them.

The last video is from Juan O. Savin. It's a powerful message to all Patriots. Please make sure you listen to it. It's called Castle Rock.

Wonderful video put out by Matthew Scarboro - VFX Conspirator.
This video is the message from Juan O. Savin:

The biggest crime of the century against the American People has just occurred ~ the 2020 Election. The Democrats AKA the Deep State have committed treason against POTUS and you and I, the American People. Their attempt to steal the election in favor of their candidate, a person who did not campaign, hid in his basement, and could not get people to his rallies, supposedly won by a larger margin than his predecessor. We all want election integrity. If we don't have honest and fair elections, this country is lost and we turn into a third world country.

I decided to chronicle what has been going on ~ the Deep State should not get away with this treasonous act. There is massive evidence of election fraud, and without any of the invalid votes, we know that Trump won by a landslide.

November 6, 2020. Working my way through this whole election process, I decided to catalog the events I am discovering. 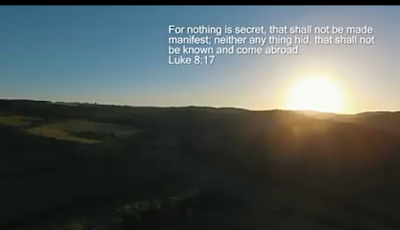 The Craziness of 2020 (to be updated periodically)

We always come back to Tres Rios in Glen Rose, Texas in the fall for our annual doctors' appointments. Then winter and holidays are spent with our family. Come early 2020 and I start on our summer travel plans. I had planned on us going west through New Mexico, Arizona, Nevada, and into northern California to see some of the national parks.

But then in March the World was hit with the Corona virus, which many believe came out of a laboratory in Wuhan, China. However, I did read another version which said it could have started during 2014-2015. A study called the Gain of Function Research was being done at the University of North Carolina, Chapel Hill. They were trying to make something that could potentially cause harm and make it more harmful. There are always questions about research, so I put a link to that here so you can read it for yourself. In addition, in 2015 Fauci was involved with $3.5 million being transferred from the NIH to the laboratory in Wuhan - something fishy there.

On our way to Houston for Thanksgiving, we stayed in Willis, Texas for a few days beforehand. There were many times when we drove down I-45 we passed the Prison Museum and Jim would say that he wanted to stop there. Well, we finally were able to take a trip there. The actual prison is on the west side of I-45, while the museum is on the east side of I-45, just north of the huge Sam Houston statute (which we also seem to miss stopping to see). 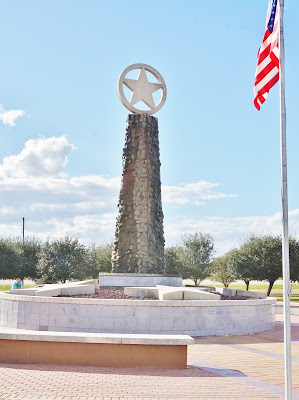 Outside of the museum is the Sesquicentennial Monument and plaza which, dedicated on September 11, 1998 to mark the 150th anniversary of corrections in Texas. It honors the men and women who valiantly served the state of Texas in the correctional system for the past century and a half, as well as those serving now and in the future.
Read more »
Posted by Gayle Kerch at 10:35 PM No comments:

I did not know any history of Cadillac Ranch, so I took the following information from Wikipedia.
Cadillac Ranch is a public art installation and sculpture created in 1974 by Chip Lord, Hudson Marquez and Doug Michels, who were a part of the art group Ant Farm. The installation consists of ten Cadillacs (1949-1963) buried nose-first in the ground. The cars were either older running, used or junk cars ~ together spanning the successive generations of the car line ~ and the defining evolution of their tailfins. Ten Cadillacs all in a row out in his field, but close enough to the access road to allow people to stop and look at them. 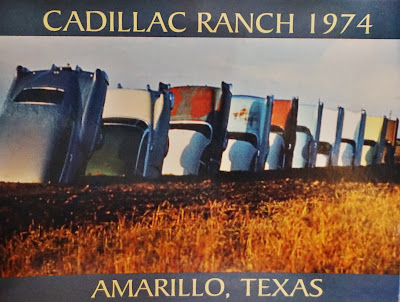 Read more »
Posted by Gayle Kerch at 9:48 PM No comments:

When you drive along I-40, 31 miles east of Amarillo at Exit 112, you cannot miss the cross that sits along the side of the road at Cross Ministries. Cross Ministries was founded in 1995 by Steve Thomas, and his wife Bobby. Their first idea was a large spiritual billboard, but it expanded into a wonderful gift shop, statutes around the area, and a 19-story, 2-1/2 million pound steel cross. The stations that you see at the bottom of the cross are highlighted below. 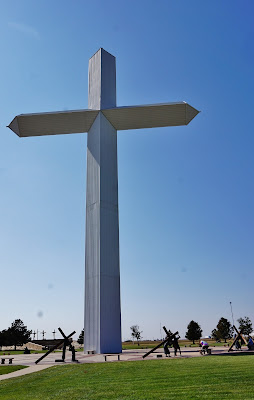 I have been wanting to visit Palo Duro Canyon State Park for a while now.  We had visited Caprock Canyon in October 2016, and I heard that Palo Duro was supposed to be something to see. Honestly, it was very nice, but not awe inspiring. The hills and mountains at Caprock Canyon are much nicer. The one thing I noticed here were the nice, smooth trails which means we did not need hiking shoes, but we were able to wear our sandals. 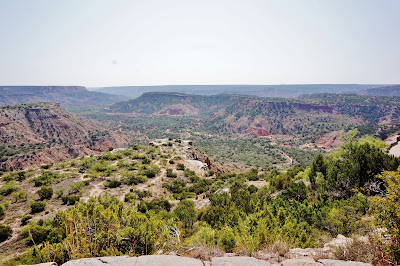 Read more »
Posted by Gayle Kerch at 4:05 PM No comments:

January 23, 2021. We are now at Styx River Resort until February 2. We will have a couple of stops before reaching Orlando Thousand Trails.